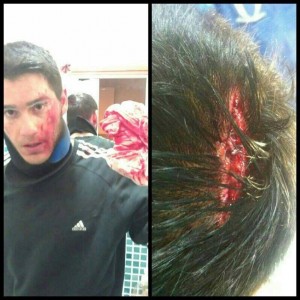 They barricaded the Barbaros Boulevard in Istanbul with tanks. And they were running down on people by Riot Control Vehicles and tear gas bombs from three different directions. Everybody just dispersed all over. Me and two of my friends, we took refuge in another friend’s office at the ground level. Then policemen forced into the office. Some of them were wearing civil clothes. One of them snatched my camera and broke it because I had taken pictures of their brutality. He first aimed the tear gas riffle on my face but then he gave up the idea of spraying the gas directly on my face and started hitting my head with the butt of the riffle. The other policemen also joined in. They were beating me and my friend Akıner. Sara was hiding in the bathroom. They took her out. Then they took me to the police bus. I said to myself, “Thank God, they arrest me. It means they cannot beat me anymore.” When I got into the bus I realized that it was full of other policemen. All of them descended on me. I told myself I should take his helmet number. The asshole noticed my move and shouted at me, “Look down, moron!” and continued to beat me. Then he kicked me out from the bus.

We are no longer safe even in our homes and work places; they just break in and attack you. There are no longer the police that we can call when we are in trouble. There are only people in the streets and it is they who offer you security. We cannot shut up anymore. We should go out and shout. We should get mad, because if you just shut up now you either become slaves or die.