A stream of ambulances continued to bring the dead from the Turkey’s Soma mine today. The bodies are carried 2km from inside the mine by a stream of volunteers — many of who are miners themselves.

As many as 787 miners were in the mine at the time of Tuesday afternoon’s explosion, which is thought to have been caused by faulty electrical transformers. While the official death toll rose 274, families and rescuers at the mouth of the mine are now expecting only more bodies to be recovered as the country started on three days of mourning.

Even as the bodies were still being recovered, violent protests erupted in Soma, where rocks were thrown at police. At the local state hospital officers guarded wards were injured miners were being treated. Meanwhile, in Istanbul, hundreds of demonstrators gathered outside Soma Holding, the company that owns the mine. In Ankara, the capital, police fired tear gas and water cannon to disperse a crowd who had gathered to march to the energy ministry, throwing fire bombs at the gathered police.

Anti-government protests broke out in the mining town of Soma, as well as Istanbul and the capital, Ankara, with Prime Minister Recep Tayyip Erdogan heckled as he tried to show concern. Protesters shouted “Murderer!” and “Thief!” and Erdogan was forced to seek refuge in a supermarket, surrounded by police.

The display of anger could have significant repercussions for the Turkish leader, who is widely expected to run for president in the August election, although he has yet to announce his candidacy.

Tensions were high as hundreds of relatives and miners jostled outside the mine’s entrance Wednesday, waiting for news amid a heavy police presence. Rows of women wailed uncontrollably and men knelt sobbing or simply stared in disbelief as rescue workers removed body after body, some charred beyond recognition.

Miner Cengiz Kulayci’s face was blackened by coal dust as he took a break. He had entered the mine three times to rescue his colleagues. “We only found three people alive,” he said. “They had to be carried out and were barely conscious. The others were all dead.” 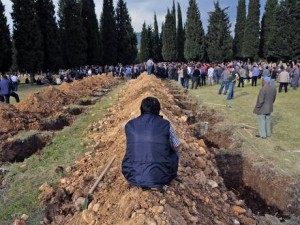 Rows of open graves for the mine accident victims are seen in Soma, Turkey (AP)

Turkey has been hit by mining disasters in the past, notable in 1992 when 263 men died at an accident nearby. But this tragedy has hit a new community and a new generation of miners. “I lost six friends,” said a young miner, his eyes trained on the rescue team 30 metres away.

Like many waiting on what looks like a makeshift platform, he would refuse to leave until his remaining three friends were found, although he has no hope that they will be found alive.

He had the luck to not be on shift when the explosion took place. As bodies were carried through the crowd of desperately waiting friends and family to awaiting ambulances, he could barely hold back his tears.

Each body is met with groans and heart-wrenching cries of disbelief, and, since this morning, no survivors have been found. From the medical tent, mothers scream for their dead sons and men weep in quiet huddles.

The rescue effort has been hampered as it was impossible to pipe in oxygen with a fire still raging in the pit this afternoon, reducing any chance of keeping any of the remaining trapped miners alive.

The stream of bodies came to the surface throughout the day. Medical teams are only able tend to the bereaved families and issue diazepam for temporary relief.

Tufan Goksel, a social worker from Izmir, Turkey’s third largest city and the closest to the mine came to talk with the families. “I am not here officially, but I want to see what I could do to help. The people are very angry, and hopeless.”

That anger is palpable. Accusations are rife of dodgy inspections and workers have reportedly complained for months about problems with the electric transformers, the alleged cause of the explosion. 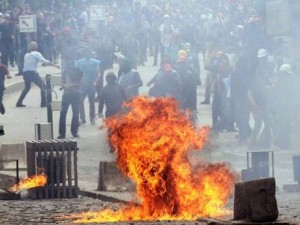 Frustration was vented at Energy Minister Taner Yildiz as he paid a special visit. He was met with boos from the crowd and shouts of “murderer”. Prime Minister Erdogan was also met with boos when he visited the site.

The owner of the mine, Alp Gurkan, has previously been quoted in the Turkish press boasting of how he has reduced the operating cost of the mine.

In an already tense political climate in Turkey, protesters took to the streets across the country with the biggest clashes in Istanbul and Ankara.

Police fired tear gas and water canon at about 800 protesters as they attempted to march from a university in Ankara to the energy ministry.

Soma Komur says it has rescued 450 people from the mine. Rescuers argue instead that 20 people were able to escape in the immediate aftermath of the explosion and a further 80 were pulled from inside. The cause of death initially appears to be carbon monoxide poisoning.

Mr Erdogan visited the site at around 1pm today. In a style that has become well-expected from the Turkish leader, he has brushed aside any accusations of wrongdoing and has pointed to similar disasters in countries including the UK as an example that accidents happen.

The country’s opposition Republican People’s Party (CHP) says they have been ignored in their efforts to table motions to investigate work-related accidents in coal mines. CHP MP Ozgur Ozel said his proposal to investigate working conditions in the Soma Mine was rejected as recently as two weeks ago with votes from the ruling AK Party.

Mahmut Isik, a miner from Soma, has stayed at the site since the accident waiting for news, and insists negligence was the cause of the tragedy. “Nobody pays attention to the mining sector because it’s not above ground,” he said. “One day there’s a fire, the next a death, but nobody cares. This happens all the time, but we have no choice because this is the only way to earn money in Soma.”

Coal is one of Turkey’s few indigenous sources of energy and is vital to its economy, but productivity has traditionally been prioritised over safety.

The International Labour Organisation ranked Turkey worst in Europe and third worst in the world for worker deaths in 2012; 61 people died in the mining sector that year. Between 2002 and 2012, the death toll at Turkish mines totalled more than 1,000.

In the district of Soma, 16,000 people from a population of 105,000 work in the mining industry, according to Erkan Akcay, a local opposition politician. The district is no stranger to tragedies, but never on this scale. The words “For those who give a life for a handful of coal” are engraved on the entrance wall to the emergency clinic in Soma.

Turkey’s rapid economic growth over the past decade has led to a construction boom and a scramble to meet soaring energy demand, with worker safety standards often failing to keep pace. Its safety record in coal mining has been poor for decades; the deadliest accident so far occurred in 1992, when a gas blast killed 263 workers in the Black Sea province of Zonguldak. The Labour Ministry said on Tuesday its officials had carried out regular inspections at the Soma mine, most recently in March, and that no irregularities had been detected.

Turkey hopes to lessen its reliance on coal. It plans to build two nuclear plants and companies are drilling for shale gas and oil in south-east Anatolia and Thrace. It is also searching for oil and gas in the Black, Aegean and Mediterranean Seas.