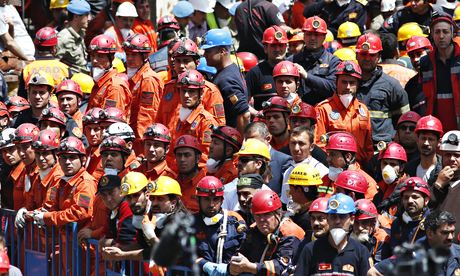 Miners and rescue workers await the arrival of Turkey’s president, Abdullah Gül, outside the mine in Soma. Photograph: Lefteris Pitarakis/AP

The images caused a furious response on social media and could fuel anti-government protests. Yerkel promised to explain the incident, but no statement had been made after 24 hours. 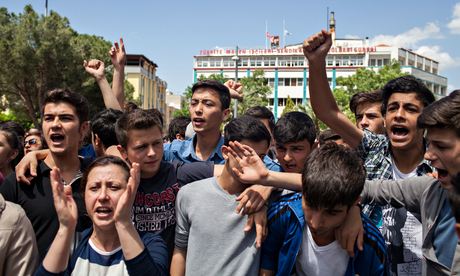 Protests over the mining deaths erupted in other Turkish cities, including Istanbul, Ankara, İzmir and Zonguldak.

In Istanbul, a group chanted anti-government slogans and carried a large banner that read: “It’s not an accident, it’s murder.” In Soma protesters chanted: “Soma’s coal will burn the government” and “Tayyip the murderer”.

Authorities said the disaster followed an explosion and a fire at a power distribution unit, and most deaths were caused by carbon monoxide poisoning.

The government has said that 787 people were inside the coalmine at the time of the explosion and that 383 had been rescued, many with injuries. The explosion tore through the mine as workers were preparing for a shift change, which probably raised the casualty toll.

It is the country’s most deadly mining accident, topping a 1992 gas explosion that killed 263 workers near the Black Sea port of Zonguldak.

Mining accidents are common in Turkey, which is plagued by poor safety conditions. Erdoğan promised that the tragedy would be investigated to its “smallest detail” and that “no negligence will be ignored”. The Hürriyet newspaper reported that a team of 15 prosecutors has been assigned to investigate the accident.