Turkey has been plunged into grief and swelling anger after an explosion in a coalmine in the west of the country left at least 274 people dead, amid fears that the bodies of scores more people still need to be recovered. The accident at Soma in the western province of Manisa, north of Izmir, is Turkey’s worst modern mining disaster in a country already notorious for its poor labour safety record. 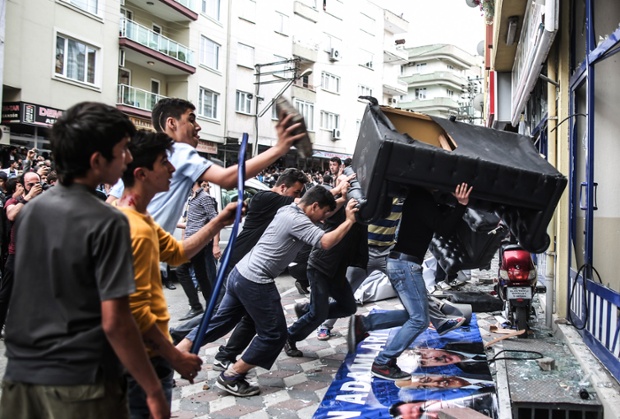 The prime minister, Recep Tayyip Erdoğan, cancelled other engagements and went to the scene of the disaster, pledging the fullest investigation of the causes of the accident. But he was confronted by angry locals who mobbed and kicked his car, shouting “murderer!” and “thief!”

Locals complained about haphazard practices at the mine, whose owners are linked to Erdoğan’s governing Justice and Development party (AKP), and skirmishes broke out between youths and police outside the local AKP office.Tensions were high as hundreds of relatives and miners gathered outside the mine, waiting for news. Women wailed in grief as others shouted angrily at local authorites, and riot police with gas masks and water cannon stood by.

Officials said there were still about 120 workers trapped in the mine hours after the last survivors emerged.

Taner Yildiz, the energy minister, described the Soma mine disaster as “possibly the most fatal labour incident in Turkey” as hopes receded that any of those still inside would survive. “Regarding the rescue operation, I can say that our hopes are diminishing,” Yildiz said.

Tuesday’s explosion tore through the mine during a shift change, which contributed to the high death toll, said Yildiz. Some 787 people were underground when faulty electrical equipment sparked an explosion, which in turn started a fire.

The blaze then caused a bigger power failure, meaning the lifts could not work. Carbon monoxide poisoning was blamed for the deaths.

On Wednesday evening, more than 12 hours since any survivors came out, only the slimmest of hopes remained for those still trapped.

Coming in the wake of multiple scandals implicating the ruling party and Erdoğan’s family over the past six months, as well as nationwide protests against his robust style of rule, there were prompt accusations that crony capitalism had contributed to the disaster, and allegations that local authorities had failed to enforce safety regulations and ensure decent working conditions.

Protests also broke out in Istanbul at the offices of the mine owners, and in Ankara, where riot police used teargas and water cannon to disperse demonstrators.

Erdoğan arrived at the scene of the tragedy armed with facts and figures that suggested he anticipated complaints, given that the International Labour Organisation, a UN body, has graded Turkey as the world’s third worst offender on industrial safety standards.

Erdoğan vowed that the causes of the explosion would be scrupulously laid bare and his government claimed there had been regular safety checks on the mine in recent months. His party dismissed calls from a local opposition MP in recent weeks demanding an inquiry into safety and labour conditions at the mine.

The prime minister drew parallels with 19th-century Britain to declare: “This is what happens in coalmining. There is no such thing as accident-free work.”

He also warned against “extremists” who would seek to exploit the disaster to tarnish his government. “There are some groups, extreme elements, that want to abuse developments like this one. I would like to reiterate that, for the peace and unity of our nation, it is very, very important not to pay heed to them,” he said.

Questions were swiftly raised about the political connections of the mine’s owner, whose wife was reported to be a local councillor for the governing party.

Mining accidents are common in Turkey, which is plagued by poor safety conditions. Its worst mining disaster was a 1992 gas explosion that killed 263 workers near the Black Sea port of Zonguldak.

Miners who came out alive told Turkish media that there were still countless corpses in the galleries, while local opposition MPs spoke of more than 350 dead.

Three weeks ago, Erdoğan’s party rejected opposition calls for an investigation into safety at the mine, but the labour ministry said the mine had been checked on 17 March and a clean record had been issued.

The national association of electrical engineers, however, said the disaster represented “murder, not an accident”. It accused the mine operators of neglect and using obsolete equipment. Inadequate ventilation systems meant carbon monoxide and other toxic gases could spread more quickly, it said.

The mine was a “first-class place to work”, countered Ali Gurkan, chairman of the board of the company owning the mine, Soma Komur. Its offices in Istanbul were guarded by riot police.

The tragedy looked likely to raise the number of deaths in mining disasters in Turkey to about 1,500 since 2002.

“We have dead and injured every three months from mining accidents,” said the local opposition MP Oezguer Oezel. “We’ve had enough of being at miners’ funerals. Neither we nor the hearts of the families can take any more of this.”