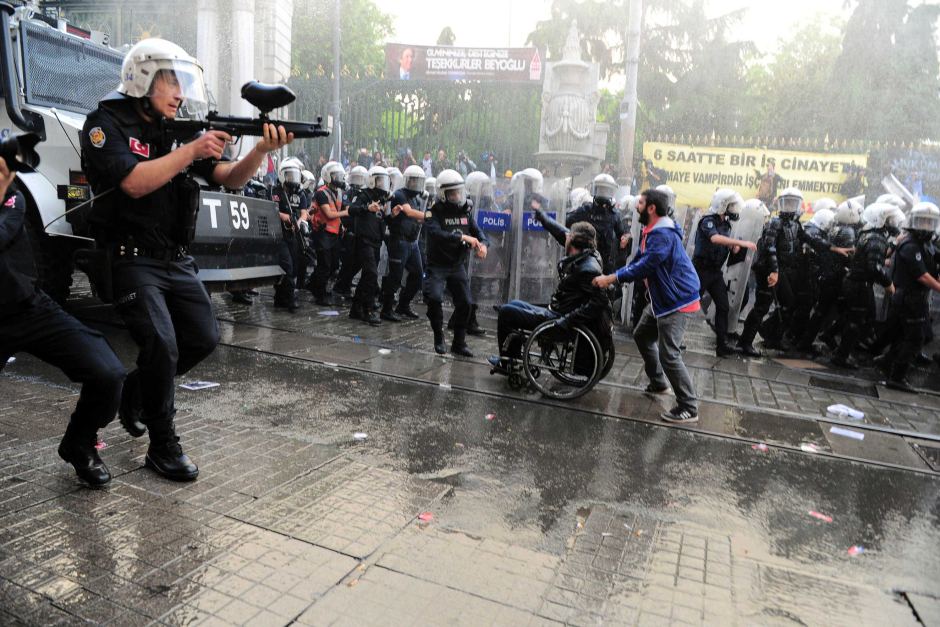 The images caused a furious response on social media and could fuel anti-government protests. Yerkel promised to explain the incident, but no statement had been made after 24 hours.
Mourners have held mass funerals in Turkey for more than 280 workers killed in the nation’s worst industrial accident, as citizens react with violent protests.

Loudspeakers broadcast the names of the dead as rows of graves were filled in the mining town of Soma on Thursday.

As family members of dead or missing miners grieved, mourning turned to anger for thousands who turned out to violent protests, one of which saw a government official assault a protester.

The protesters have accused the government and the company that runs the mine of putting profits ahead of safety, and not responding quickly enough to rescue trapped workers.

Rescuers were still trying to reach parts of the coal mine in Soma, 480 km south-west of Istanbul, more than 48 hours after fire knocked out power and shut down the ventilation shafts and elevators, trapping hundreds underground.

At least 283 people have been confirmed dead, mostly from carbon monoxide poisoning, and hopes of rescuing any more of around 100 workers still thought to be inside are fading.

Anger has swept Turkey, a country that experienced a decade of rapid economic growth under current prime minister Tayyip Erdogan’s Islamist-rooted government, but still suffers from one of the world’s worst records of workplace safety.

Furious residents heckled Mr Erdogan on Wednesday as he toured Soma, angry at what they see as the government’s cosiness with mining tycoons, and its failure to ensure safety and a lack of information on the rescue effort. 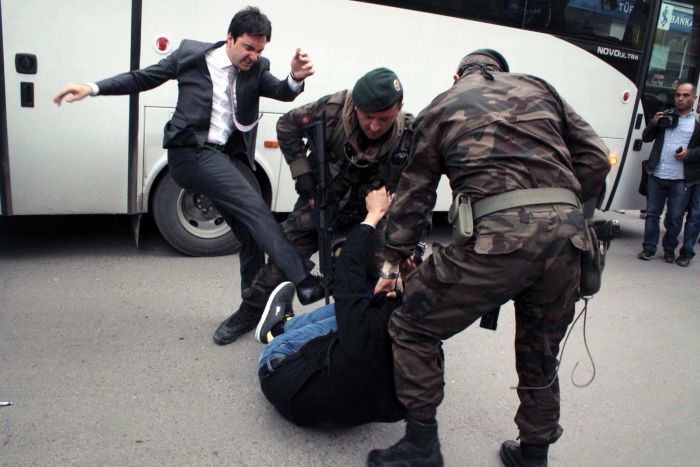 Access to the mine entrance was blocked by paramilitary police roadblocks several kilometres away for a visit by president Abdullah Gul on Thursday.

Mr Erdogan, who announced three days of national mourning from Tuesday, expressed regret for the disaster but said such accidents were not uncommon, and turned defensive when asked if sufficient precautions had been in place.

Turkish newspaper Radikal published an amateur video clip on its website appearing to show Erdogan saying “come here and jeer at me” as he walked through a hostile crowd in the town.

An image of one of his deputy personal assistants, Yusuf Yerkel, kicking a protester as he was wrestled to the ground by armed special forces officers has gone viral on social media and has done little to help the prime minister’s image.

Colleagues in Mr Erdogan’s office defended Mr Yerkel, saying the protester had travelled to Soma deliberately to cause trouble.

London’s prestigious School of Oriental and African Studies, where Mr Yerkel once studied, issued a statement saying it had no association with him after being besieged with enquiries.

“I am sad I was not able to maintain my composure despite all the provocations, the insults and attacks to which I was exposed on that day,” Mr Yerkel said in a statement.

Prime Minister ‘out of touch’ with protesters

Mr Erdogan, who is expected to stand in a presidential election in August, has weathered mass protests and a corruption scandal over the past year.

While his Justice and Development Party (known as the AKP) dominated local polls in March despite the political turbulence, his opponents say he is a leader increasingly out of touch and his handling of a disaster is hitting the sort of working class, conservative community which makes up the core of his supporter base.

President Gul, a co-founder of Erdogan’s party but known for a less abrasive style, struck a more conciliatory tone in response to the accident, saying Turkey needed to review regulations to bring them in line with other countries.

“The pain of every single person is the pain of all of us,” he said.

“Such suffering should not be happening. Just like the advanced countries which no longer go through this, we have to re-evaluate our rules and take all the necessary measures.”

Four of Turkey’s labour unions called for a national one-day strike, furious at what they see as a sharp deterioration in working conditions since formerly state-run mines, including the one in Soma, were leased to private firms.

Several thousand people demonstrated peacefully in Istanbul, holding banners with slogans including “it is not an accident, it is not fate, it is murder” and “our hearts are burning in Soma”.

Some protesters staged a sit-down protest in front of police lines and police fired water cannons to break up a demonstration in Izmir, the nearest large city to Soma, while there were reports of protests in the southern cities of Mersin and Antalya.

Around a thousand people from various trade unions gathered in Ankara to march on the Labour Ministry, some wearing miners’ helmets and waving banners showing the image of Che Guevara.

Protesters chanted “the fires of Soma will burn AKP,” and “AKP murderers” as police looked on.