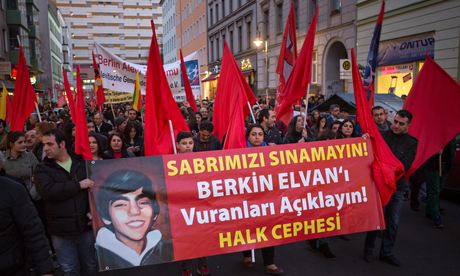 Protesters were demonstrating against the death of teenager Berkin Elvan, 15, who died in March after being hit on the head by a teargas canister. Photograph: Imago / Barcroft Media

A man died after being shot and critically injured while attending a funeral in Istanbul.

Ugur Kurt, a 34-year-old cleaner and father of one, lived in the Okmeydani neighbourhood where a small group of protesters had gathered on Thursday to demonstrate about last week’s mine disaster in Soma and the death of a teenage boy killed in March last year by a teargas canister fired by police.

He was taking part in the funeral procession when he was hit in the cheek and jaw by a stray bullet. Earlier, Istanbul police headquarters released a statement claiming that the origin of the bullet remained unclear but promising a thorough investigation.

According to Turkish media reports, riot police clashed with about 15 students who had gathered in front of a local school bearing posters commemorating the 301 miners who died and holding images of Berkin Elvan, the 15-year-old boy shot in the head during anti-government protests last summer. There have been weekly protests in Elvan’s memory since his death in March.

Witnesses report that the police attempted to disperse the protesters using water cannon and teargas, chasing them down streets near Elvan’s home, and past the cemevi (gathering house) where the funeral Kurt was attending was taking place.

“Ugur was extending condolences to the family of the deceased when the shots fell,” said Adil Sahin, an official of the Okmeydani cemevi. Sahin claimed the shots that hit Kurt were fired by a police officer.

“I saw two protesters throw a Molotov cocktail in the direction of an [armoured vehicle]. Then someone got out of that [vehicle] and opened fire. Ugur immediately dropped to the floor and started bleeding from the head.”

He added that police threw teargas inside the cemevi grounds after Kurt had been shot, hampering the efforts of first aiders to help him. Hundreds of supporters gathered outside the nearby hospital where Kurt was taken in intensive care.

“He came for the funeral, he was unarmed, he had not done anything to provoke the police,” one relative who wished to remain anonymous told the Guardian. “He had nothing to do with these protests.”

Istanbul’s governor, Hüseyin Avni Mutlu, confirmed the use of firearms, but did not specify whether police had fired shots. He also called for calm, adding: “All legal and administrative details will be investigated.”

At the scene of the shooting, officials tried to preserve the crime scene as best they could, sealing off the pool of blood with chairs covered by a white sheet.

“Nobody came here to investigate yet,” Sahin said, five hours after the shooting. “Neither the police nor the prosecutor came to have a look, nobody called us yet. How can it be that a human life is so unimportant?”

Another cemevi official, who did not want to give his name, did not hold back his anger. “The police who did this are not the police of the Turkish people and they certainly aren’t the police of Alevis here. This is a place of worship. If we are not even safe here, where will we be?”

Most shop owners in the district had lowered their shutters. “It’s both aprotest and a safety measure,” said one tobacco seller.

Ugur Bilgin, culture secretary of the Alevi Pir Sultan Abdal cultural association, pointed to a persecution of the Alevi religious minority by the ruling Justice and Development party (AKP).

“This is just another sign of the pressure and violence against Alevis inTurkey,” he said. “If we are not even allowed to bury our dead without being assaulted, how can we speak of democracy? How can we speak of peace?”

The Turkish deputy prime minister, Bülent Arinc, said: “Prosecutors said that they would do a ballistic analysis with the guns used by police officers and in comparing them to the bullet in that person’s head they will be able investigate those responsible.”