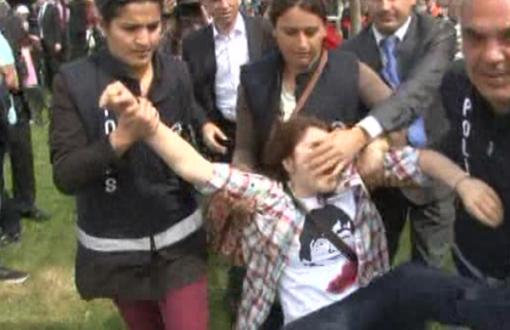 The incident took place as Governor Mutlu headed toward the podium for an award ceremony.

The aforementioned children initially faced an intervention by security guards. Riot police officers detained the children by holding them from their feet and arms, transferring them to a building nearby.

While the ceremony continued without an interruption, loud speakers filled the chants of the four children.

During the intervention, media representatives took photos – an attempt initially blocked by the police and protested by journalists.

According to CNNTürk, the forth child was detained again after the detention of the other three.

On several occations, Turkey’s workers have faced police violence on May Day.

“There will be no tolerations on major crowds’ demonstrations. No matter what, our police forces will intervene,” said Vice PM Bülent Arınç on a press inquiry on May Day celebrations in Taksim Square.