Erdogan sent in the police to crush the demonstrators of Gezi Park last year, went berserk when it was suggested his party and relatives were involved in corruption scams, and fired or removed hundreds of police and security officers. Then he promised to wipe out “social media” before the municipal elections which he inevitably won, and uttered the kind of threats against Turkey’s ever more compliant press in words that might have come from the late Saddam Hussein. 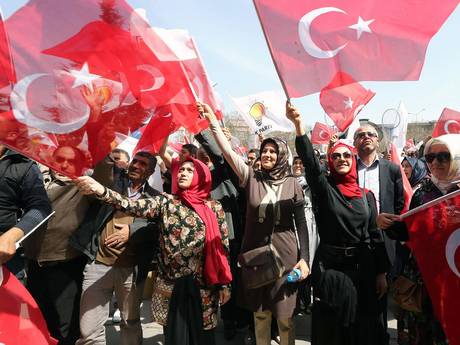 Supporters of the newly elected mayor of Ankara from the AKP, which triumphed in elections on 30 March (Getty Images)

Recep Tayyip Erdogan used to be one of Barack Obama’s cuddliest allies. Religious but secular, powerful but democratic, independent but a reliable Nato chum, he was the kind of guy the White House and the Pentagon could rely on to provide a guiding hand in the Arab part of the old Ottoman empire – and a channel for rebels who could bring down the hated Bashar al-Assad of Syria.

The American think-tank mountebanks – taking their cue as usual from the US ‘official sources’ – even proclaimed Turkey as a “role model” for the post-dictatorship Arab world.

Queue in hollow laughter. Was a nation which still mistreated its Kurds, acted as a holocaust denier in refusing to acknowledge the 1915 Armenian genocide, and which even trashed the trial of those who  killed the Armenian journalist Hrant Dink in an Istanbul street in 2007, really the kind of mirror into which the Muslim world should stare with approval? Yeah, now the mask has fallen.

Erdogan sent in the police to crush the demonstrators of Gezi Park last year, went berserk when it was suggested his party and relatives were involved in corruption scams, and fired or removed hundreds of police and security officers. Then he promised to wipe out “social media” – Facebook and YouTube were the new ‘terrorists’, it seemed – before the municipal elections which he inevitably won, and uttered the kind of threats against Turkey’s ever more compliant press in words that might have come from the late Saddam Hussein. It turned out that the only role model Turkey was a role model for was – well, Turkey.

So had yet another Middle East ‘strongman’ turned into a tin-pot (and dangerous) dictator? Or had a conservative, level headed democrat suddenly shown his true colours? When the Arab awakening began to destroy the local dictators in 2011, Erdogan was the first Muslim leader to grasp its significance and praise its revolutionaries. Who would have believed that the old Ottoman flag – or the current Turkish version of it – would be flown once more with pride over Arab homes in Gaza and Egypt? Even when the latter’s elected president Mohamed Morsi was chucked out by that wonderful democracy-loving Egyptian deputy prime minister, defence minister and chief of staff – Erdogan could scarcely bring himself to pronounce General al-Sissi’s name – the Turkish prime minister, like Qatar, insisted that Morsi was still the leader of Egypt.

Next on his target list, I suspect, will be the Daily Zaman, one of the most feisty and provocative of Turkish newspapers which will soon – its journalists fear – feel Erdogan’s lash. The paper this week trashed the prime minister’s attacks on his Islamist antagonist Fetullah Gulen, currently residing in Pennsylvania, as having no basis in law, approvingly quoting a retired supreme appeal court prosecutor as saying that Erdogan was trying to influence the justice system. The paper, regarded as close to Gulen ideologically, has carried articles asking if corruption and bribery contributed to Erdorgan’s 45 per cent Justice and Development Party election victory. And in an unprecedented report, it also wrote that Armenians driven on 16 March from their homes in the Syrian town of Kassab by Islamist rebels supported by Turkey, were drawing parallels with the 1915 mass killings – which the paper was not quite brave enough to call a genocide.

Turkey denies all this, just as it denies the genocide. Both statements are nonsense. The Jabhat al-Nusra men who stormed into Kassab did not come from Iraq or Jordan. The town, in which thousands of Armenians lived in the very last part of what had been Ottoman Armenia, is only a few miles from the Syrian border where the Turks have been furnishing their Syrian rebel allies – both Islamist and secular – with arms. The Armenian expulsions have provided ample opportunity once again for the Assad regime to demonstrate the cruelty of its opponents.

But there is growing evidence that Turkey’s – or rather Erdogan’s – involvement with the revolt against Assad is critical to his relationship with Obama. The Syrian government were, of course, the first to claim that the sarin gas which killed hundreds of Syrian civilians in the Damascus suburb of Ghouta last August had come from Turkey – and had then been used by Islamist groups in the hope that the West would blame Assad and turn its strategic weapons against the regime. WhenThe Independent enquired about the attacks in Syria, Russian sources stated that the chemicals had not been sold to Assad. They had come from stocks sold by Moscow to the former Gaddafi regime in Libya.

Syrian army officers and one figure close to Assad complained to me, too, that when the US and its allies insisted the regime was to blame for the gas attack – which of course they did at once – no heed was paid to public evidence that sarin gas was being transported through part of Turkey for rebels in the north of Syria. They constantly referred to a 130-page Turkish indictment of ten al-Nusra men accused of transporting through southern Turkey what local police identified as chemical precursors for sarin. They were correct. The ringleader of the group, Haytham Qassab, appeared in court where a Turkish prosecutor demanded 25 years imprisonment, but he was later released “pending trial”. They have all since disappeared, while Turkey’s ambassador to Moscow was later to dismiss the arrests, claiming – with almost Saddam-like conviction – that the ‘sarin’ was “anti-freeze”.

That most controversial of American investigative journalists, Seymour Hersh – I confess he is an old mate of mine even though he often uses my most hated phrase, anonymous “officials” and “experts”, as his sources – has now published his own disturbing and compelling research on the use of chemicals in Syria and points the finger at Turkey for allowing rebels to use sarin in an earlier chemical attack against the Syrian village of Khan al-Assal.

Far more explosively, he claims that the British Porton Down defence laboratory examined the sarin used in Ghouta (courtesy of a Russian military intelligence operative) – this was the attack that propelled Obama and his administration into paroxysms of rage against Assad – and that British intelligence confirmed to the Americans that the gas did not come from stocks in the Syrian army’s chemical weapons’ arsenal.

This, according to Hersh – who naturally has his own detractors – was enough to persuade the US Joint Chiefs of Staff to tell President Obama that he must not use the Ghouta attack as an excuse for a military strike against Syria. Obama finally agreed – although he used a sudden (and still unexplained) decision to seek congressional approval for a bombardment of Syria – permission he knew he was unlikely to get. The Turks – and here comes the Erdogan connection – were outraged that the Americans had not fallen into their trap of destroying Assad.

Erdogan, according to Hersh, had allowed the Americans to ship a ‘rat line’ of weapons from Libya via Turkey to the Syrian rebels – hence the connection to earlier shipments of sarin to Libya from the then Soviet Union. Hersh says that for months after the Ghouta attack occurred, this ‘rat line’ continued. So did permission to the Turks to trade in gold with Iran – a profitable enterprise which created a slush fund of billions of dollars, the very same corruption money which later appeared to fall into the hands of senior figures around Erdogan.

One Turkish journalist insisted to me in Istanbul this week that Erdogan’s ‘madness’ – although already evident – reached ferocity pitch after the Ghouta sarin attack in Damascus which was supposed to drive Obama to attack the Assad regime, but which ultimately failed to do so. If the US bombardment had taken place, Turkey would have been the ‘kingmaker’ in any new Syria, and that ancient nation might even have become part of a putative, enlarged, Ottoman-style empire. This is taking things too far. Erdogan is, like Yossarian in Catch 22, a very odd person. There are signs of political megalomania.

But Hersh does detail a dinner on 16 May last year between Erdogan and Obama – and a senior Turkish intelligence official called Hakan Fidan – at which Obama angrily pointed at Fidan and said: “We know what you’re doing with the (rebel) radicals in Syria.” The dinner took place.  No-one, of course, will reveal on the record what was said.

Turkey’s meddling in the Syria war will continue, whatever the Americans do. Obama believes the rebels are both untrustworthy, dangerous and are being beaten. But one of the tapes which so enraged Erdogan when it appeared on YouTube – hence the ban – showed an apparent conversation between Turkish officials seeking an excuse to stage their own attack on Syria. “Manipulated,” screamed the Turkish government. No doubt.