In the run-up to Turkey’s municipal elections on March 30, Prime Minister Recep Tayyip Erdoğan declared that the popular vote would serve as a referendum on his scandal-plagued leadership. With the help of his Justice and Development Party (AKP), which centered its campaigning on him, Erdoğan was able to redefine the elections. His opponents blindly played along, hoping that the polls would force him out. But, of course, diminishing Erdoğan’s power could never be so simple. 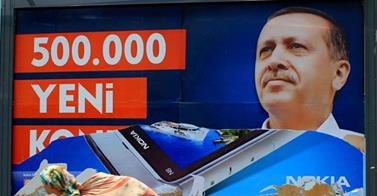 The main source of opposition to Erdoğan’s leadership is his increasingly dictatorial style. He seems to have interpreted a 50% vote in 2011 as a mandate to refashion the country according to his own values. His authoritarian streak, already evident in his leadership of the AKP, is now on constant display in both his speeches and his government’s policies.

Last summer, the Erdoğan government’s brutal response to popular protests in Istanbul’s Gezi Park made Turkey look like an intolerant one-party state, as did the polarizing speeches that Erdoğan delivered in defense of the crackdown. His incessant demonization of secular Turks fueled fears that an Islamic morality police was in the works.

Jaws dropped as Erdoğan used scandals as a pretext to eliminate the remaining checks to his authority. In response to a corruption investigation involving his family members and close associates, he reassigned hundreds of prosecutors and police officers, assumed control over the judiciary, and established a state agency to block any Internet site at will. When leaks of incriminating audiotapes continued, he banned Twitter and YouTube, putting Turkey in league with China and Iran with regard to freedom of expression.

Perhaps most shocking is Erdoğan’s assertion that these measures are compatible with democratic principles. According to his purely majoritarian and thoroughly illiberal understanding of democracy, opponents who speak up are stooges of sinister lobbies and allies of foreigners bent on keeping Turkey down. The rule of law is the choice of the chieftain; freedom of expression is the obligation to obey and conform; transparency is the state’s right to control and manipulate information; and human rights is an elastic concept that depends on political imperatives.

But, in last month’s election, the Turkish electorate seemed to disregard these affronts to democracy, giving the AKP 44% of all municipal posts. In Istanbul, home to nearly one-fifth of Turkey’s population, the incumbent AKP mayor, Kadir Topbaş, won by eight percentage points.

To be sure, the vote counting produced thousands of credible reports of improprieties, including the alleged theft of ballots and, more important, power outages in dozens of closely contested provinces. Nevertheless, it is clear that the AKP won a resounding victory.

According to exit polls, most AKP voters believe that the corruption charges leveled against Erdoğan are at least partly true. But they give him high marks for economic stability, widely shared prosperity, and respect for religious conservatives marginalized by generations of secular modernizers. Clearly, voters believe that his performance in these areas outweighs his missteps,.

Voters who stuck by Erdoğan knew that he would regard another electoral victory as a renewed mandate to govern autocratically and silence his critics even more definitively. They had heard him thunder, in speech after speech, that he would fight his enemies, rather than seek consensus, and disregard the international community’s protests. And that is exactly what he has been doing.

Indeed, rather than using his victory speech to promote reconciliation, as is customary after a bruising election battle, Erdoğan reiterated that he would crush his opponents. Once again, he accused opposition parties of treason. He vowed to take revenge on the movement led by the Pennsylvania-based cleric Fethullah Gülen, which had helped him to sideline the once-powerful military (using prosecutions that he now admits were based on largely fabricated evidence). He again blamed Gülen’s followers for the leaks that exposed AKP corruption, vowing to prosecute the whistleblowers, rather than those accused of taking massive bribes and laundering money.

Erdoğan did not stop there. He also declared that Turkey’s elections had taught the world a lesson in administering democracy. In fact, the main lesson is that democracy comes in many forms. In a purely majoritarian system, voters are free to elect a leader committed to extinguishing liberalism and pluralism. In other words, a purely majoritarian democracy may produce an electoral dictatorship.

If there is a silver lining in Erdoğan’s transformation of Turkey, in barely three years, from a model for liberalizing Arab countries to a dictatorship resembling those overthrown in Egypt and Tunisia., it is that many Turks have a clearer understanding that liberal democracy requires sustainable checks and balances. Those who participated in ending the military’s role as a political guardian now recognize that Turkey needs new institutions to protect basic freedoms and ensure limited government.

Indeed, Turkey now offers a vivid example of the perils of unconstrained political power. In the world’s freest societies, it took generations of hard work to establish viable safeguards. More such struggles are needed in Turkey.

On April 1, Erdoğan’s energy minister blamed a cat for the election-night power outages – and he was not joking.  Erdoğan’s post-election behavior augurs more trouble in elections to come. Those who voted for the AKP last month may yet learn that an elected dictator can use his powers to overstay his welcome.