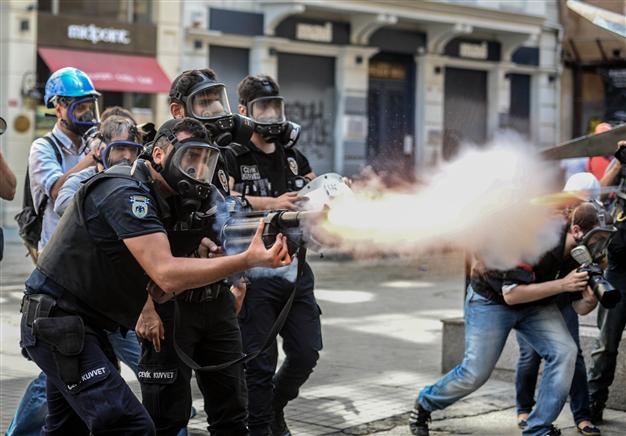 The report said there was no need for an investigation as ‘no act contrary to law was found’ during the countless police raids and interventions. Daily News Photo

Both the police department and Istanbul’s governor have been cleared of using excessive violence against protesters during last year’s Gezi events in a report from Interior Ministry inspectors assessing their response to the demonstrations, daily Radikal has revealed.

In the report dated Sept. 18, 2013, those responsible for the escalation of the local protests into nationwide demonstrations were declared to be the municipal police for “burning the tents” of activists occupying Gezi Park in an attempt to prevent trees from being cut down during a dawn raid on May 30.

“People with high sensitivity to environmental issues flocked to the area after the tents were burned and the arbitrary act was relayed on social and audiovisual media,” the report said.

But the ministry’s report also repeated the authorities’ line that the demonstrations were subsequently “manipulated by marginal groups.”

“All kinds of ideological and marginal groups who took advantage of the propitious situation and took the stage without delay, turning the events into a demonstration against the police and political authority and then to vandalism,” the report also said.

‘Police stood by the law’

According to the Interior Ministry, it was the demonstrators who were not interested in reaching a compromise. Police were eventually “forced” to use water cannon and tear gas by the demonstrators, while Gov. Hüseyin Avni Mutlu’s “positive messages and initiatives” went unrequited by the protesters.

The ministry claimed that the park, from which the police withdrew June 1 before retaking it through a vicious assault two weeks, and the Taksim area became the demonstration center of “ideological and marginal groups.”

“After it was understood that it would not be possible to have a deal through a compromise, the decision to start a new operation in Taksim was put into practice,” the report said, adding that it was not possible to distinguish between protesters and members of the “marginal groups.”

In the conclusion, the report said there was no need for an investigation as “no act contrary to law was found” during the police raids.

The police’s use of disproportionate force drew a global uproar, with six protesters participating in the nationwide protests in Istanbul, Ankara, Eskişehir and Antakya killed, in most of the cases directly as a result of police brutality. The death of 15-year-old Berkin Elvan last month after spending 269 days in a coma due to head

injuries sustained after being shot by police with a tear-gas canister reignited the global outcry.

The Turkish government has been repeatedly criticized for not conducting an effective investigation regarding the violence used against protesters, including on those responsible for the death of protesters.