We would like to give a brief summary about the recent course of events in Ankara, regarding an illegal highway construction by Metropolitan Municipality. 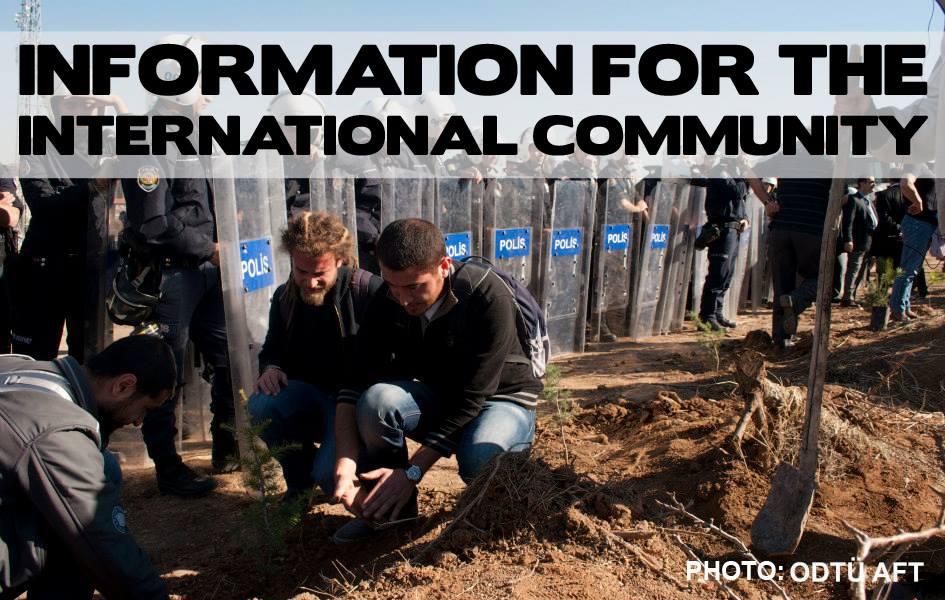 An eight-lane highway plan, passing through the natural protected area within Middle East Technical University (METU) land, as well as conjoint neighborhoods, was put into action by Ankara Metropolitan Municipality without juridicial approval. METU community and neighborhood residents have been organizing events and protests since the construction started, and they were all brutally attacked by police force.

On 18th October, when most of the students are out of town for a public holiday, municipality staff invaded METU land at night with earth movers and riot police squads, smashing up almost 3000 trees and the ecosystem in the natural protected area. Mayor Gökçek confessed that night invasion was planned in order to prevent protests of locals.

On 21st October, METU community and neighborhood residents organized a sapling plantation event, which was also attacked by riot police, construction workers and private security guards of the municipality. Clashes lasted for almost 10 hours, at least four protesters got injured, and two protesters were taken into custody. Riot police invaded the campus several times, consciously setting off excessive amount of tear gas cannisters into the dormitory and housing districts. Several fires caused by gas cannisters in the forest area were put out by the students.

Today, on 22nd October, municipality cancelled the public bus service to METU, on the excuse that protesters damaged two buses. Also, traffic division squads pulled the cars with tow trucks with people inside, who were protesting the ongoing construction by honking. Not to mention PM Erdoğan calling names again: this time, protesters are “modern thugs” in his words.

- Gökçek has been the mayor of Ankara Metropolitan Municipality since 1994, and not a single subway station was constructed for the last 14 years.

- Public transportation in Ankara is the most expensive in Turkey.

- Gökçek is famous for causing public damage with his unsuccessful, high-budget projects. Also, he is not very fond of METU, since legal experts from METU usually reject his “fancy” projects.

- Municipality never consulted neighborhood residents about the highway plan, and when Gökçek was reminded that, he responded with this exact sentence: “Since when do we consult people?”

- METU forest is one of the largest man-made ecosystem in the world, and it was created by METU staff and students in more than 50 years.

- The construction of two shopping centers were already started in the planned route of the highway.

- The highway construction started before the legal plea period ended, without juridicial approval, and so licence.

- As of now, construction continues at full steam, working 22 hours a day.