Nurse Hazal Kangal was taken into custody while she was on her emergency service shift. Nurse Kangal, who was on duty in Ankara, Basbakanlik during Gezi resistance had been on call for 24 hours when she was taken into custody for “being flagged” on another incident. Kangal was detained before within the scope of Hopa case, for attending the protests about what happened in Hopa. She was hauled forcibly by the police before she could even change her yellow colored emergency service vest. She was arrested. She was in solitary confinement for 20 days.  She was exposed to beating, naked searching pressure and insults. Although it was known that she had diabetes she was only given sweets. When she said “I can not eat these things” the policemen wanted her to sign a petition that stated she was on hunger strike. She was not admitted to an exam that she could go only in handcuffffffs, with the excuse that she was late for 2 minutes. Kangal who was released on August 1st, talked to us about what she had gone through. 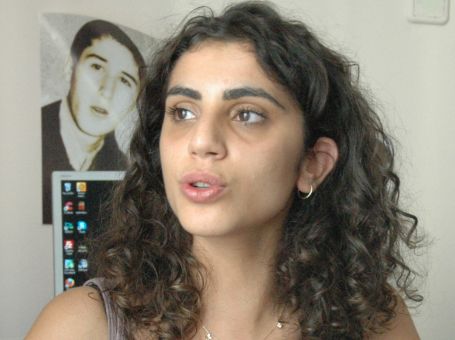 What happened while you were in custody? You were on your 112 first aid duty at that time.

On June 18th I was on my shift in the courthouse. Cops arrived there and took me into custody. My friends objected because it was my shift and my leave would also affect the injured people. They took me to my house. They searched my books. It was obvious that they were looking for books by Marx, or Lenin. I do not keep those books in my library, because my books were confiscated when I was detained before in Hopa case.

Then they took me from the house to the police station. When I needed to have breakfast, although they knew I had diabetes, they gave me white bread, jam and chocalate, which I should not eat. I told them I could not eat those, otherwise I might have a diabetic coma. They said they could only give those. I took the meal but I could not eat it. Later on they came to give me a petition that stated I was on a hunger strike and told me to sign it. When I refused, they yelled at me saying “Are we lying?”. It is a problem either way, whether you sign it or not. One of the cops said  “You have been here before”.  Another ceaselessly talked like “Welcome back sister, did you miss us?” I did not reply. The one who brought my diabetes pills was telling things like “Take these my little cub”. There were arbitrary prohibitions. Once they banned me from bathroom because I gave some fruit juice to my friend.

“I WAS PUT IN THE PRISON CELL NAKED”

How did they treat you during the time you were arrested? Were there any pounding or harassment incidents?

When we first arrived they imposed naked search on us. He says he will not touch but he is putting on gloves. We were under custody for 6 days, we were wretched and we objected to this search. But they constantly told us that we had to get undressed. They insistently asked if we had any pounding on our bodies, if we were subject to pounding at the police station. Of course it is not for protecting you, they ask so that you do not say “They beat me”. I had my 112 emergency clothes on me. They told me that I could not enter a public agency with uniforms on me. They wanted me to take offf my clothes. I had to enter the cell naked! Finally they asked me to take offf my underwear. He said he had to touch. I did not allow. 15 guardians are looking at you. I was embarrassed. I stayed in the cell for 20 days. We used a method that was called “balling” to communicate with other cells. We were not eating the bread inside the crust and then we were putting papers inside and rolling them into a ball to throw each other. First day we were bombarded with “welcome” balls. Other cells gave us food and clothes.

HER RIGHT OF EDUCATION WAS TAKEN AWAY

You graduated from a vocational high school in health. But you were not admitted to the transition exam to receive your bachelor’s degree. How did that happen?

Because of the mistake of prison management I could not take the transition exam. They did not give the address to the ring that would take me to the exam place. We found the way with our own means and because we were late for only 2 minutes I was not admitted to the exam. I took classes, I worked for the test but despite all my endeavours for a year cops did not take me in. I told them I would not go back to prison if they did not take me in and  shouted slogans. Thereon, they pounded me up, while handcufffed. Being inside for 2 months has cost me a year. Now I have to do my internship all over again.

“THE COP I TREAT AS A PATIENT SEES ME AS ENEMY”

You were on duty in Basbakanlik district during Gezi Resistance. While you have hippocratic oath on one hand, you have the cops who injure your friends on the other hand. How did you feel?

I was assigned to this district for my internship. It is a place where you only treat the injured policemen. I took an oath. I would not discriminate between race or political, religious views. But you stand in court and the judge decides against you because he supports AKP, police prepares a nonsensical record because you do not support AKP. They take oaths too but if you look at the file, only a rape is missing. I treat them as patients but they see me as enemy. I did not imagine it to be like this. Maybe I was treating the cop who shot my friend Ethem Sarisuluk, or the one who shot Mutlu Cosar whom I saw everyday on the street. Maybe he was letting out yells of joy when he shot him. I asked one of them what his task was. He said he was a gunner. I said “So you aim at people”. And he said “I am acquiring merit in the eyes of God”, as if it was a war between religious and non-religious people, he thinks he is doing it in God’s name. “What if it was your brother”, I said. He said “I would shoot him too”. AKP provoked the people so much that police and the citizens have now come to perceive each other as enemies.