The biggest beneficiaries of the Fed’s largess were not so much in the developed world, but among the politically connected elite in emerging nations like Turkey, where vanity towers, glitzy shopping malls and even grander projects to come — a third bridge across the Bosporus and a vast new airport — have become representative of the nation’s new dynamism, economic as well as geopolitical. 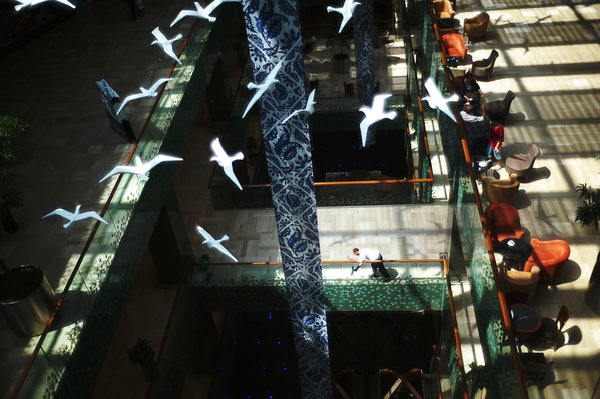 In a city where skyscrapers sprout like weeds, none grew as high as the Sapphire tower in Istanbul.

Today, it stands as a symbol of how far the mighty may fall.

Like a vast majority of new buildings that have blanketed the Istanbul hills in recent years, the Sapphire — at 856 feet it is the tallest in Turkey and among the loftiest in Europe — was built on the back of cheap loans, in dollars, that have flooded Turkey and other fast-growing markets like Brazil, India and South Korea. The money began to flow when the Federal Reserve and other major central banks cut interest rates to the bone in 2009 and cranked up the printing presses in a bid to spur recovery in the United States and other advanced industrial nations.

But now, with expectations mounting that the Federal Reserve, led by its departing chairman Ben S. Bernanke, may soon begin to tighten its monetary spigot, Istanbul’s skyline could well be a harbinger of an emerging-market bust brought on by unpaid loans, weakening currencies, and, eventually, the possible failure of developers and banks.

This week, stocks and currencies in several developing Asian markets, including India, Indonesia and Thailand, have been hit hard. Global investors continued to withdraw funds from emerging markets, as interest rates edge up in anticipation of the Fed’s move to reduce its stimulus efforts in the United States. Indonesia’s benchmark index, which fell 5 percent on Monday, dropped 3.2 percent more on Tuesday. India’s stock market fell 0.3 percent after sliding 5.6 percent in the previous two trading sessions.

Some analysts see it as the markets reacting to an end — real or perceived — of the Bernanke boom. “What we are witnessing is a huge bubble, a Bernanke bubble if you will,” said Tim Lee of Pi Economics, an independent consultancy based in Greenwich, Conn.

Not everybody is as alarmed as Mr. Lee. Still, 16 years after emerging markets in Asia imploded after local currencies collapsed, even optimists are starting to grow nervous over the rapid accumulation of dollar-denominated debt not just in Turkey but in other now-struggling economies like Brazil, India and South Korea.

As it turned out, some of the biggest beneficiaries of the Fed’s largess were not so much in the developed world, but among the politically connected elite in emerging nations like Turkey, where vanity towers, glitzy shopping malls and even grander projects to come — a third bridge across the Bosporus and a vast new airport — have become representative of the nation’s new dynamism, economic as well as geopolitical.

What these elites have so far ignored, Mr. Lee warns, is that their obligations carry with them a significant and pressing danger: currency risk.

Unlike the risky loans made to subprime borrowers in the United States or Irish real estate developers in the euro zone, dollar debts taken on by companies erecting skyscrapers in Istanbul, manufacturing steel in India and prospecting for oil in Brazil, need to be largely paid back in dollars by entities that earn most of their revenues in their home currency.

When the Turkish lira or the rupee in India was strong — as these currencies were until recently — local companies had every incentive to borrow in dollars at comparatively lower interest rates.

But when local currencies start to weaken, in line with diminished economic prospects, then the effect is twofold: paying off dollar loans becomes more costly for the borrower, and the lender becomes increasingly skittish about his exposure to a fragile currency and may move to reduce or even slash credit lines.

While Brazil has the largest amount of dollar loans outstanding at $287 billion, few countries have relied on this source of money as much as Turkey, where dollar loans of around $172 billion represent 22 percent of the overall economy.

In recent months, the Turkish lira has lost 4.5 percent of its value against the dollar. Adding to this, protests have hit Istanbul’s main public square over an unpopular building sponsored by a developer with close political and cultural ties to the prime minister, Recep Tayyip Erdogan.

Goldman Sachs is forecasting a dollar-lira rate of 2.2, representing a 15 percent mini-devaluation from the current level of 1.95. “The Turkish economic miracle was built on liquidity and a massive appreciation of the Turkish lira,” said Atilla Yesilada, an economist at Global Source partners in Istanbul, who has lived through Turkey’s previous financial crashes in 1994 and 2001.

These loans — many of them relatively short term — also highlight a recurring characteristic of the emerging-market growth boom: the powerful nexus between ambitious governments eager to promote high-profile investments and politically connected business groups ready to take on such projects.

The Sapphire tower in Turkey is a perfect example in this regard.

The 54-floor tower, which received a ceremonial baptism from Prime Minister Erdogan when it opened in early 2011, is the signature property of the Kiler Group, one of the many construction-themed conglomerates that have achieved extraordinary success since Mr. Erdogan came to power in 2003. Like Mr. Erdogan, whose family comes from the northern Black Sea region, these businessmen hail from Turkey’s conservative Islamist provinces.

According to regulatory filings, 154 million liras of the group’s total 164 million liras in debt is denominated in dollars — about $79 million using current exchange rates. Of that figure, $25 million is related to the Sapphire tower, company officials say. Most of the group’s debt is short term, and in a reflection of the project’s risk, regulatory documents show that the cash generated by the property goes directly to the project’s primary creditor, Akbank, the fourth-largest bank in Turkey.

Given the differential between dollar loans at 6.5 percent and lira credit costing 11.5 percent, it was no surprise that the Kiler Group and others chose to borrow in dollars. The company, in its most recent filings, acknowledged this risk: if the American dollar gains 10 percent against the Turkish currency, the loss to the company would be 11.8 million Turkish liras.

According to Rasim Kaan Aytogu, chief financial officer for the Kiler Group, the Sapphire tower’s share of that total is $25 million. He contends that because the project books its revenue in dollars it is not exposed to currency fluctuations. He also says that demand for apartment units is strong, with 66 percent of them sold.

“This is a unique property in all of Europe,” he said. “And it is becoming a travel destination.”

But Turkish real estate experts say that sales of the apartments, which cost from $1 million to $10 million, have lagged and that the tower does not have the prestige of rival properties, including towers built by Trump and Zorlu. And according to company filings, revenue from visitors ogling the view from the tower’s observation deck have undershot targets from the outset.

The Kilers are not alone in their ability to make a big splash in Istanbul by deploying dollar debt and political muscle.

Even more influential has been the Kalyon Group, another real estate conglomerate with close ties to Mr. Erdogan. Kalyon is the main developer behind Mr. Erdogan’s controversial effort to build a replica of Ottoman-era army barracks as a shopping mall near Taksim Square.

As troubles were beginning to brew in Turkey, the leader of the Kalyon Group, Cemal Kalyoncu, remained confident that nothing would change. Asked in an interview with a local paper how the consortium of companies that won the tender for the airport would obtain the money, Mr. Kalyoncu said the group would look for loans outside Turkey.

“Financing this should be no problem at all,” he said.