AKP deputy Galip Ensarioğlu said 164 policemen faced investigation regarding their conduct during Gezi Resistance protests. However, police authorities announced the toll to be 31. “These numbers are products of imagination,” said Interior Minister Güler. 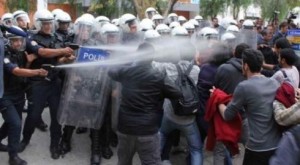 Police authorities released a statement, saying that 31 active-duty policemen faced investigation due to their conduct during Gezi Resistance protests with the files to be transferred to relevant disciplinary councils.

“Turkey never was a police state and it will be a justice state. We don’t accept any sovereignty above people in this country. We don’t also accept mentalities that aims to redesign the people. Several policemen were suspended, several municipal workers were suspended.

According to various newspapers, police authorities launched investigations on 32 police chiefs and 132 policemen regarding allegations of excessive force during Gezi Resistance protests.

The majority of these policemen were on-active duty in İstanbul, Ankara, İzmir and Hatay provinces.

“Those tolls have nothing to do with the issue. A process is launched and those who made a mistakes account for their faults. There is no reality with those numbers. They are imaginary. Investigations are being processed at disciplinary councils.

“Laws and regulations explicitly explain what disciplinary measures must be taken. Then we do whatever is necessary. All has the right to object investigations before administrational courts. Whoever is committing a mistake will face its consequences.” (AS/BM)