Unless appropriate measures are taken and an exit is found quickly, Turkey is going to be facing developments that will be at least as formidable to handle as its Kurdish issue. The almost instantaneous spillover of incidents at Ankara’s Middle East Technical University to Antakya [historical city of Antioch] near the Syrian border, the death of 23-year-old Ahmet Arikan on Sept. 9 in Antakya in obscure circumstances that may or not involve the police and the immediate, instant eruption of protests in Istanbul are all signals that the Alevis are heading to the streets. 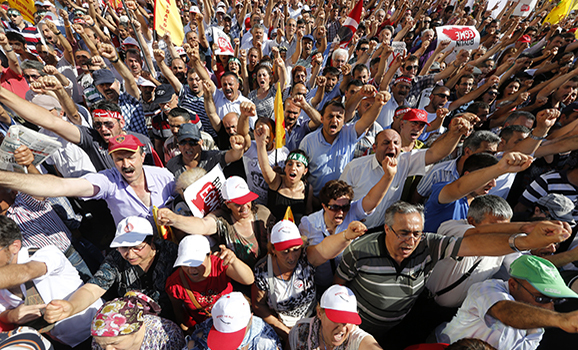 Turkey’s Sunni-Alevi contention is never spoken about although its confrontation potential is always felt. Since last June’s Taksim-Gezi events, which for most constitute a milestone in the country’s politics, Alevi presence in the streets has become perceptible.

Kadikoy, the center of Istanbul’s Asian side, has become a night-long demonstration venue until the early hours of the morning, which the police disrupt with intensive pepper gas operations. The sudden eruption of Ankara’s major Alevi neighborhood of Tuzlucayir and Istanbul’s renowned militant Alevi neighborhood, Gazi, with non-stop demonstrations are seen as indicators of this new societal tension.

A tragic aspect has been that all the young men who lost their lives since the Taksim-Gezi events have been Alevis and three of them were Arab Alevis from Antakya. This may well be interpreted as “radioactive fallout” from the sectarian civil war in Syria.

Abdullah Comert, 22, who had joined the protests in Antakya in support of Gezi events was hurt badly with a blow to his head and died in the hospital. Ali Ismail Korkmaz, 19, a university student from Antakya, was hurt seriously in a protest on June 2 in Eskisehir, in the center of the country, and died after 38 days in coma. With the death of Atakan, three young men from Antakya have lost their lives.

It is not known whether the Alevi origins of all the victims and that three were Arab Alevis from Antakya was a coincidence. Such a vision nourishes the spread of already popular conspiracy theories, therefore boosting the threat of Sunni-Alevi clashes.

Eyup Can, the managing editor of the daily Radikal, noted the gravity of the situation and wrote about it in his article titled “Tough Questions“:

“The picture we have to dwell upon looks like this: …The oldest of the fatalities was 26 years old, the youngest was 18. … Second, all six were Alevis. Third, three of them were from Hatay. This picture should be enough to shake and wake us up. What is going on? Can we just say ‘these are militants’ and forget about it? Can we explain what is going with illegal organizations and conspiracies? Are their shattered mothers also militants? Are those mothers also talking on behalf of an organization? ‘My son died because he wanted peace,’ she says. Some might have political designs on Alevis but those people never resorted to collective violence all this time despite all their pains and traumas. So how is that the events that started with Gezi Park protests suddenly engulfed our Alevi citizens? Is there an Alevi uprising in Turkey? How come three of the fatalities are from Hatay? I know these are all very tough questions and their answers are complex with implications of domestic politics to regional dynamics.”

In his latest speeches. Prime Minister Recep Tayyip Erdogan has been insinuating at provocations behind the sectarian strife in the country and has been holding the main opposition Republic Peoples Party (CHP) responsible. Erdogan might be adding flesh and bone to his insinuations by reminding his own constituency that the CHP Chairman Kemal Kilicdaroglu himself is an Alevi.

With this rhetoric, Erdogan may be figuring on painting the main opposition party into a corner as local elections approach. The trip of the CHP leader to Baghdad, which has sour relations with Erdogan, by ignoring the warnings of the Turkish Foreign Ministry and his meeting with Iraqi Prime Minister Nouri al-Maliki; then, while Erdogan was blowing up bridges to Cairo, the trip of two CHP officials who happened to be former, reputable diplomats who met with all the parties; CHP’s dedicated opposition to Erdogan’s Syria policy and the support of the Arab Alevi voters in Hatay province for the opposition CHP have all combined to infuriate the prime minister.

In Syria, the Alawite minority of about 2 million, roughly 10% of the national population, is the sectarian constituency of the Syrian regime. The ratio of Arab Alevites in Turkey is lot less than that. but in numbers they are almost equal. About 600,000 are believed to living in Hatay province and they reach up to 2 million with those living in Adana, Mersin and other provinces.

Apart from Arab Alevis, the percentage of Turkish and Kurdish Alevis in Turkey is believed to constitute 20% or more of the total 76 million population. Even if 20 million may be an exaggerated number, 12-15 million is not a number to be underestimated.

In Turkey’s current political ambiance, Erdogan and Foreign Minister Ahmet Davutoglu, who both have strong Sunni credentials, make a point of referring the Syrian Alawites as Nusayris and keep emphasizing how different the Turkish Alevis are from Syrian Alawites. But despite their theological differences the reality is that the ones in Turkey are in solidarity with the ones in Syria. Moreover, it is not even certain that the Alevis in Hatay [Adana and Mersin] have the slightest differences in rituals from those in Syria.

It is not a secret that allowing Hatay province to become an unfettered, free-passage route to the Syrian opposition, including Sunni Islamists and al-Qaeda affiliate outfits like Jabhat al-Nusra and the Islamic State of Iraq and Sham have seriously shaken the sensitive and fragile sectarian balances in the province and has created a new fault line in Turkey. Our Hatay province has become a mirror image of the domestic situation in Syria.

What is more perilous and risky for Turkey is the transfer of the same conflicts and potential for clashes to big cities, led by Istanbul and Ankara. Erdogan, who is adhering more and more to the perception of a foreign-sourced plot against his rule, may well conclude that after what happened in Egypt and with developments in Syria not going the direction he wants, the “plotters” will push Istanbul and Ankara Alevis onto the streets and try to topple him with a Sunni-Alevi confrontation.

What is important for the near future is how to prevent a Sunni-Alevi strife which is already there and has the potential to ignite.

This is the question that may be posed: Is the Erdogan government being drawn to become a party in a probable Sunni-Alevi clash or is it preparing an exit strategy that will save the country from probable events that it won’t be able to cope with?

Of course, this is the question that the Erdogan government must ask itself first.