Osman Erden, an assistant professor who was detained and subjected to police violence in downtown Istanbul during Gezi Resistance, was ordered to stand trial for “resisting police officers and attending an illegal demonstration”. Erden is facing prison sentence up to 3 years. 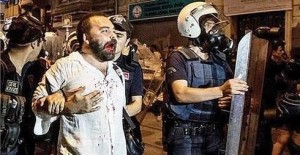 Osman Erden, an assistant professor of art history at Mimar Sinan Fines Arts University (MSGSÜ) who was detained and subjected to police violence in downtown Istanbul during Gezi Resistance, was ordered to stand trial for “resisting police officers and attending an illegal demonstration”.

Erden told bianet that his complaint on the assaulting policemen has yet to yield any results.

On July 14, Erden was detained in downtown Istanbul by the police during a press statement of TMMOB – Architects and Engineers Chambers Union of Turkey.

Released the day after, he told bianet the following:

“Police attacks began even before I got there. Scorpions [a police vehicle] were roaming. Rubber bullets hit me first. I found refuge at a friend’s cafe. When I took the street again, I was attacked by 10-15 policemen. Those wounds and swellings in my lips and head were caused by those policemen.”

As police took me to police detention van, Erden said, I shouted my name and teaching position at MSGSÜ. “I was assaulted on the way to the police van, too. But no assaults took place after the detention.”

“I was taken to Taksim Ilk Yardim Hospital. But I wasn’t admitted there, maybe because it was full. I was then taken to Kasımpaşa Police Station and Haseki Hospital. They didn’t give my medical report there.”

Erden told bianet that MSGSÜ President and Sociology Department Dead was waiting for him at the police station.

“I wouldn’t be out so quickly if it weren’t for the president and dean. Volunteers advocates from Istanbul Bar Association were also of great help. I was lucky, but some people are not as lucky as I am.”

Issued by prosecutor Zeynel Sarıbuğa, the case indictment accused defendants for “attending an illegal protest” according to Turkey’s Demonstration Law (No:2911) Article 32. (AS/BM)