600 policemen have attacked 6 activists who walked from the southern province to Istanbul in order to protest police violence and demand for justice, Ahmet Saymadi said. According to BDP deputy Ertuğrul Kürkçü, police sprayed pepper gas from close distance, leaving him injured. 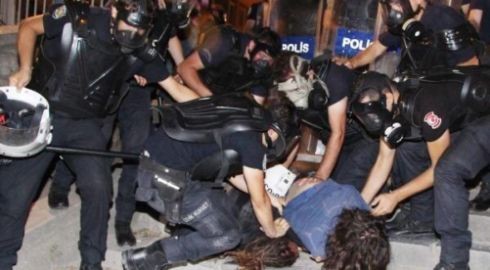 Hundreds of policemen have reportedly attacked Adalet Yürüyüşçüleri (Justice Walkers) group last night – a group that initiated a walk on July 19 from the southern province to Istanbul in order to demand the prosecution of those who are responsible for the injuries and killings of protestors during Gezi Resistance.

6 activists have been stopped in front of a military hospital in Gümüşsuyu district by the police as they headed towards Taksim Gezi Park in order to make a press statement, Ahmet Saymadi, People’s Democratic Congress (HDK) assembly member, told bianet.

“Governor Mutlu’s traces on me. He must be sure that I will follow these traces,” Kürkçü tweeted. Addressing Governor Mutlu regarding last night’s police violence, he shared photos of burns due to pepper gas sprayings.

“Some fell off the stairs”

Around 600 to 700 policemen barricaded in front of a military hospital in Gümüşsuyu district on the way to Taksim Gezi Park, Ahmet Saymadi reported.

“Then police made some warnings and started to break up protestors by spraying pepper gas. They aimed directly towards me, BDP deputy Ertuğrul Kürkçü and Haluk Ağabeyoğlu.

“Some fell off the stairs as they were running away from police towards Inonu Stadium direction. Around 10:55 pm [local time], we went to Taksim Hospital to learn about the injured.”

On the night of July 19, 4 activists have headed from the southern province of Antalya to walk 1200 kilometers to Istanbul.

“This walk is faster than the justice, we will prove this,” they said in a statement.

On the way, Batuhan Yücel left the group in Burdur province due to illness. The group organized a commemoration ceremony in Eşkişehir for Ali İsmail Korkmaz and Ethem Sarısülük, reiterating their demand for justice. (EKN/BM)