Music group Grup Abdal’s singer Burcu Sarak was taken into custody on the 6th of July. Her mother was also taken into custody because she didn’t want to let the police take her daughter. Burcu Sarak tells what she has gone through in the detention house: “They made my friend strip stark naked; they insulted and swore me; they didn’t allow my mother to take her medications.” 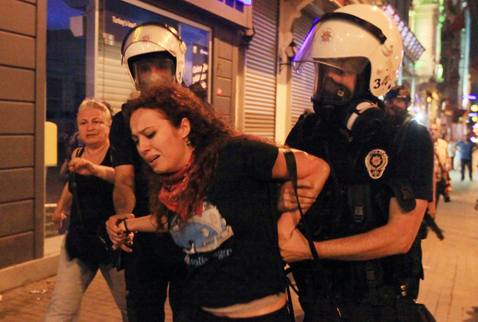 Upon the Taksim Solidarity’s call, Burcu Sarak and her mother went to Taksim on the 6th of July at nightfall. When the police intervention started the Saraks Sarak first ran to the Istiklal Boulevard. Then they entered a restaurant and ate something. Burcu had a concert the following night, and she tried to figure out how to go there with her mother. They decided to go back home, but they were confronted with police barricades and tear gas bombs anywhere they turned.

‘The police twisted my arm and…’
Burcu Sarak told how she was taken into custody as follows: “We had participated in the Gezi process from the start. We were in the tents in the park. We stayed at the Divan Hotel and witnessed how the hotel rooms were turned into ‘gas chambers’ that night’. My mother was hospitalized. And during the police intervention at that night, a rubber bullet hit my left cheek. After having experienced this police brutality, my mother and I had participated in all protests. And on the 6th of July, we did the same thing upon the Taksim Solidarity’s call. And then we entered a restaurant and had dinner. The police fired tear gas bombs even inside that restaurant. I had a concert the following day in Kemerburgaz. We decided to go back home. All the streets were blocked, and we decided to walk down Karaköy through the Istiklal Boulevard and take the boat. We were exposed to thick gas fogs while walking. Moreover, the police were firing rubber bullets towards the back streets where we were passing through. Then, I shouted at the policemen who were constantly firing gas bombs and rubber bullets: “Why are you doing this? Why are you firing at people! What is all this atrocity about?” One of the policemen twisted my arm and said, “What the fuck are you talking about?” He butted me with his helmet. I reacted to this physical assault, and cursed him. Then they took us in custody.”

She refused strip search
They were taken in custody on Saturday at 10:30 P.M., and brought to a hospital. And they drew up a record. The following morning at 7:30 A.M., they were brought to the detention house. Burcu Sarak tells us what she felt while they were searched by the police: “Two women police officers searched us, even though we didn’t have even hair pins. They wanted to do strip search. We resisted. Then they took us one by one into a room and searched us there. I refused to undress. They wanted to do complete strip search. I refused. But they did strip search my cell-mate. My cell-mate, N., was also verbally harassed after having been taken into custody. She was in a terrible shape, on the brink of nervous break-down.”

At the detention house they encountered vicissitudes of bureaucratic procedures. In Burcu Sarak’s own words: “They asked my ID information. I said I’d just given them to their colleague on the second floor, and that they should ask her. The police officer at the detention house said, ‘How can we know if she sent us a prostitute or what?’ And I said, ‘If you don’t trust your own colleague, how can people trust you?”

At the chief police department, they accused Burcu and her mother of resistance to the police and participation in mass protest movements. Burcu and her mother used their right to remain silent and they didn’t sign the statement that the police had prepared. They were kept in detention for 2 days. Burcu Sarak was worried about her mother: “My mother has some psychological problems. She has to take pills every day. The first day of the detention, she couldn’t take her pill. On Sunday, when they were brought us to hospital I said that my mother could have a nervous breakdown unless she took her pills. The doctor said that he wasn’t authorized to give her mother any pills. I asked police chiefs, and they said that they were not authorized either. The lawyers brought my mother’s health reports to the police. But they ignored the reports and continued to refuse giving my mother her pills. And on Monday at 2 o’clock in the morning, my mother had nervous breakdown. We weren’t in the same ward. Together with my ward-mates we protested the police. Finally, one of the policemen took the pills from my mother’s bag and gave them to her. He said, “This should stay between us. You didn’t ask me to do this and I didn’t do it, right?”

“Be quiet!” warning during silent acting game
After two days in the detention house, on Monday morning together with 59 other detainees, Burcu and her mother were brought before the prosecutor. Burcu and others refuted the accusations about resistance to the police and participation in mass protest movements. Burcu Sarak talks about a “very funny” incident that occurred while they were waiting the prosecutor’s decision as follows: “While we were waiting for the decision, we, eight women played silent acting game. One of the policemen told us to be quiet.”

People risk thier lives
Burcu Sarak and her mother were released by the prosecutor’s decision without being sent to the court. Burcu Sarak, who was at the Gezi Park from the start and determined not to abandon the struggle, says that she doesn’t regret anything: “We were there to support people’s rightful struggle. We all think that some things should change in this country. People participate in Gezi movement without feeling any intimidation about the possibility of being arrested or dying. I participate in Gezi protests by risking my life. There are people who were arrested just because they were selling flags in the streets or just because they asked the police the directions. There are even dead. I am proud of all these people. I never regret on my half. I hope they will never regret either.”