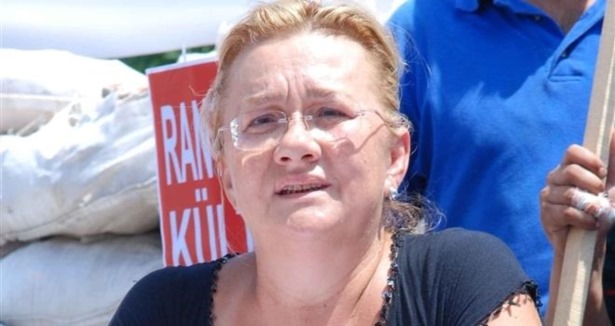 Mücella Yapıcı: I am a 62 year-old woman who owns no property and has to work despite my many health issues. If I wanted I would be in a totally different position but that’s what I chose in life. I didn’t earn any income, not even one penny, illegally, or dishonestly. I am speaking up because there is a police report explaining the Taksim incidents that are totally wrong, that do not even know the name of the ones judged. The documents do not contain any names of those who belong to Taksim Solidarity. Gezi Park and the AKM (Ataturk Cultural Center), a couple of the first planned public projects of the Turkish republic, have been under protection since 1998 and can not be divided.  However, unfortunately, our Prime Minister has prepared a ‘crazy project’ declaring Taksim as a pedestrianization project. He declared to build military barracks in the park, going against the protection laws of the area.

We, as the Chamber of Architects, have waited for a plan to be established. Taksim is a public space that is of great symbolic importance. So many absurd decisions have been made in regards to this area and we have done our best to inform the media and all other relevant organizations. The park is also of great importance because it is one of the only spaces in the city for people to set up tents in the event of an earthquake.

This is the death of the city. In our first meeting we decided to take the name of Taksim Solidarity. Then we pressed charges. The charges resulted unexpectedly and were canceled. We received the notification on 3rd of July.

I’ve told you my duty; I was coming back from the board meeting. On 27 May a phone call was made to friends, my neighbors, saying that a bulldozer had gone over to Divan Hotel and had started destroying the park. The construction part on the side of Divan Hotel is lawless, and is not part of the project. I had to ask them whether construction supervisor was there or not. How can you do such a thing at 11pm in the evening? What permission do you have? They said they didn’t. So you cannot keep on, we said. That day, we, thirty friends, stayed there till 3.30. On 28 May, around 11 machines came again and started to enter the park. After the machines came 30-40 civilians came and turned their backs to the unlicensed construction area. They came to protect the unlicensed construction. They openly started used tear gas; you remember the red-woman photograph. Those men were worn city police uniforms. I went to the construction again and asked for their chief, the driver of a digger responded.

We learned that they didn’t have any permission from the Council of Monuments. They exploded the pipes of the park and the energy line. The energy line and water came together. At that moment believe me, I did not even care about trees. If the digger did start working there the driver would die. Just then we called our parliamentarians. I emotionally went and hugged a nettle tree. Then some friends joined me. Police circled around me. They used a whole tube of gas just on my face. The records of all those are in El-Cezire, in Hürriyet; if you want they can give them to you. Eventually I had to be taken to hospital. The next morning we met the parliamentarians, the riot police came, on the Mete street an orange colored tear gas was used. I thought I would die there.

We have documented everything all the events and have delivered the files we collected in order to contribute to the beginning of investigations.  All statements of Taksim Solidarity are open, here they talk about tweets; as a 62 year old woman neither do I understand Twitter nor Facebook. I have been an architect for 42 years; I do have notes, papers in my house, as well as notes from sendika.org. These notes are from the meetings of Chamber of Architects in Ankara.

I went there, was taken in custody by the chief or someone. It was shameful. When we heard that the park was opened with my daughter, we went. I was wondering about the landscaping. When we got there, came up with a TOMA. ‘Where are you going?’ they asked. ‘Why?’ we said. ‘Unlawful’. ‘How can it be unlawful to go to a park?’ They started to push us. My friends protected me as they were worried about my health. They were taken in custody just because of me. Pulling and pushing us, they circled us, we were stuck in somewhere and they tried to take my daughter pulling from her hair. I refused to let my daughter go so I was taken into custody.  At my age, I was taken in custody.  My clothes were taken; I was forced to crouch, coughing. I was taken into a closed room, deprived of my medications; they told me that I would stay there for two more days. I am here to stand against the crimes based on 220, everything done unlawfully. I do not want to be released. I want this case to be resolved.