D.E. does not know which street she was forced to walk on, and for how long. The only thing she remembers are the hands on her body and the paved stones she saw while she was walking with her head bent down. Her lawyer, Ayşen Akçay, pointed that during the first week of the protests in Ankara, approximately 260 women were detained, and they all stated that they were abused.

‘If only they had beaten me with their batons. Abuse is much more severe. Lots of hands were on my body, everywhere… I do not know whose hands they were. I was not able to count how many hands there were on my body. I was not able to see the faces of those cops, I did not know them, but their hands were all around my body. ‘You bitch, you must be enjoying this.’ they were saying. ‘You anarchist bitch, are you going to save the country by yourself?’, ‘It’s better to put you in a brothel and make you work there.’ 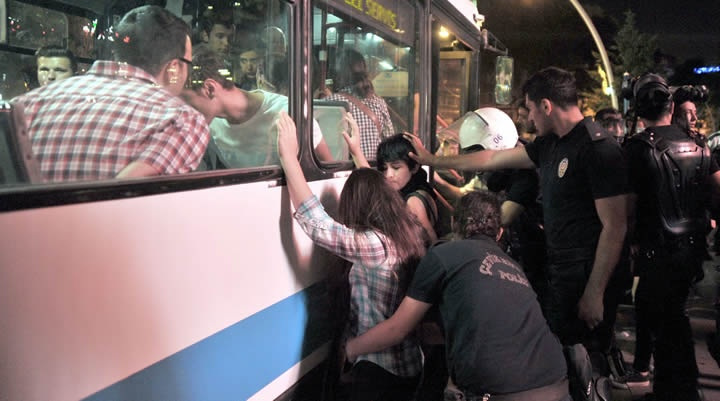 These are the words of D.E., a senior student at METU. She went to Kızılay to support the Gezi Park protests. The path she mentioned is the distance between Kızılay, where she was detained, and the bus she was taken to. which street she was forced to walk on, and for how long. She says that the only thing she remembers are the hands on her body and the paved stones she saw while she was walking with her head bent down.

The aim is to disturb one’s psychology

Before being detained, D.E. had never thought of the fact that women could be exposed to abuse in detention. And how bitter it was… She says, ‘I knew everybody – male or female- is beaten in detention; however, I thought that women are affected by this because they are more fragile.’ Now she says that the violence towards men and women is different, at least her experience makes her think so. She says that women are exposed to twice the amount of violence through battery as well as abuse; and that they face violence beyond violence. And she explains the reason of this violence as follows:

‘The reason to beat people is not only to damage them physically. In fact, they aim to damage people psychologically even more. If beating is going to hurt a man’s pride, then they beat him. If abuse is going to offend a woman, then they abuse her. In other words, it’s all about ruining people psychologically and frightening them… They didn’t beat me because they really know about human psychology; I was already scared so could they frighten me more with batons? I wished I had been beaten with batons, but they treated me differently. Psychology is also a part of human health and now my health has deteriorated. How many therapy sessions can fix this problem? How many boxes of pills do I need to overcome this?’

There are no women who haven’t faced abuse.

Having followed the process of the Gezi protests in Ankara closely, lawyer Ayşen Akçay says that they do not have the detention statistics since the process has not been completed yet; however, she estimates the number of women detained during the first week to vary from 150 to 400. On the other hand, Akçay states that all the women in custody they have talked to, have been exposed to abuse, and she lists the words these women heard from the police while in custody as follows: ‘prostitute’, ‘hooker’, ‘bitch’, ‘communist bitch’, ‘Shut up; otherwise, I’ll fuck you here.’, ‘You have yourself fucked by all of them, and won’t you do the same for us?’, ‘(by hitting the sexual organs of women) You bitch, you must be enjoying this.’, ‘I’ll beat you to death.’

Reminding that not only women, but also men were exposed to abuse; however, it was hard for them to express this, Akçay says, ‘The sexual organs of men were hurt all around Turkey for years. And this led to permanent disabilities and infertility problems.’ Akçay expresses that it is impossible to say that the detention period of women is much more severe than the men, and she adds ‘In our opinion, there is no difference between a person who has never got a slap on the wrist and the one who has been beaten all day long.’

Filiz Yavuz
29 June 2013
Click for the source of the news; filizyavuz.wordpress.com