First of all, I’d like to note that the following account belongs entirely to me. It doesn’t bind my friends in the resistance. I am alone and free like a tree in the forest. I find the PM’s declaration about holding a referendum on the Gezi project insufficient and disingenuous.

The Gezi Park actions  began when a handful of ecologists, a “minority” that couldn’t succeed in making its voice heard and subjected to inhuman brutality. You cannot end this movement, sparked off in the name of more democratization by minorities that feel unrepresented, through a referendum that by nature means domination of minorities by the majority, and especially not while you have given us no satisfactory responses to the accusations of corruption in every local and national election.

It is illogical to hold a referendum on the issues related to public welfare. There are experts and judicial processes for these matters. While the court issued a stay of execution on the Gezi project, you have already begun to uproot the trees, as usual with your typical attitude and discourse: “This project will be realized at any cost, because we’ve decided so!”  The Gezi protestors denounced your actions as  unlawful. By deploying violence, you tried to stop and silence those people who stood up against you and struggled to protect the laws and  nature.   After fifteen days have passed, after our friends have died and after we had numerous injured fellow-protestors, you are now, with a cunning move, planning to crush us by proposing to hold a referendum about the destiny of  Gezi Park, relying on your majority in the Parliament. In a very insincere manner, you still attempt to draw profit from this situation and to kill two birds with one stone.

I am sorry but the stones that you have thrown have hit this nation’s head and the penny has dropped. Today the people that stand up against you include young architects, urban planners, psychologists, sociologists, scientists, communication graduates, economics, engineers, university students, artists and some deputies of this country. Contrary to the criticism and accusation of our elders, we are not a youth that doesn’t read books nor engage with their country’s problems. I hope that we have proved this reality in  Gezi Park by creating a colorful world with libraries and vegetable gardens. We used to say, “What difference can I make just myself…” The commune life at  Gezi has regenerated us. Now we ask instead, “What can I do to change things?”

I was appalled by the irony in the AKP spokesman Hüseyin Çelik’s statement about the Gezi resistance. He said: “We want life to become normal again; the public cannot utilize the public park at the moment because it is under the occupation of a group.”  First of all, the park is not in any way closed to the public; we’d be delighted if you come by and drink a glass of our tea, providing that security forces allow you to pass. Personally I’d be very happy if AKP electors and supporters come and visit Gezi; we could offer you a guided tour of the park which we consider our home and keep clean and tidy. We’d listen to your critiques and tell you our wishes. We want that the public park should be left to the public: We are against the project of giving the park to the monopoly of a section of society, by constructing luxury hotels and shopping malls on it. Mr. Çelik, believe me, we want more than anything else that life should go back to normal. We are not happy to keep shouting, “Doctor, stretcher!” every night while you sleep in your comfortable beds. We are not happy about being constantly harassed by tear gas and repercussion bombs. We are not happy to stay up all night long  carrying our wounded friends to the infirmaries and praying that there wouldn’t be any casualties tonight. We are not people with nothing to do: We are looking forward to going back to our homes, to our schools, to our laboratories…

However, you cannot expect us to go back home today while we are just devastated by the news that Ethem is brain-dead; while we are still praying for the life of Evren Köse and other friends with critical injuries in the hospitals; while the police haven’t yet announced the identity of Ethem’s murderer; while the trials of our wounded and dead friends haven’t yet started; while the police arrest our lawyers and the Radio Television Supreme Power (RTÜK) close down a few TV channels that provide us with objective news; while the riot teams just last night bombed  Taksim Square in an unprecedented and unimaginably disproportionate way…

You didn’t like the demands that our representatives transmitted to the First Secretary of the State, Bülent Arınç, and you didn’t even deign to respond.  Instead, you gathered people that we don’t know or recognize in order to put on a show of negotiation. You claimed that the Taksim initiative was favorable to the referendum; however, one of the members of the initiative, İpek Akpınar, declared, “Nobody asked us anything about a referendum.” I’d like to ask this: Who do you think you are fooling?” 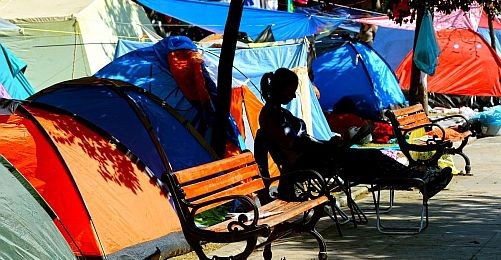 Our demands are clear and we keep repeating them, ceaselessly, through the Taksim Solidarity initiative. Stop trying to overpower and slander us by cunning moves. Stop inflicting violence on us. Listen to our representatives and try to make an accord with us by genuinely discussing and considering our demands. We do not aim to make our country look bad in the eyes of the international public. We do not aim to please Turkey’s “enemies” or raise the interest rates: nobody can risk their lives for the sake of these abject aims. We will go on resisting just because we love our park and our country. Therefore, until we come to an agreement stop polluting the air with pepper gas or repercussion bombs so that we can enjoy sleeping outdoors, watching the stars and the sunrise through the leaves of the trees.