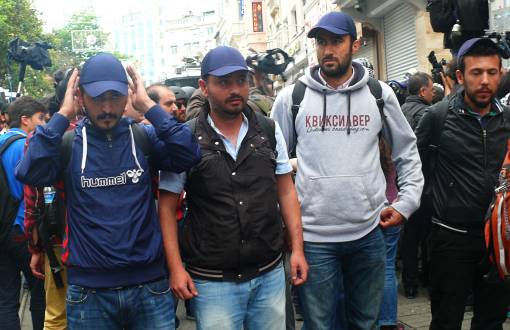 I saw the people called “Trust Teams”, whom one doesn’t even recognize to be police officers, for the first time at a social event. They put on their show in the first year commemorations of the Gezi Resistance through swearing, violence and shouting.

We encountered a new concept on top of the already familiar riot police and their toys, Scorpions [armed police jeeps], TOMAs [police tanks], gas bombs and plastic bullets on the anniversary of the Gezi Resistance. Their name in government speak is “Trust Teams.”

Trust Teams had actually been established to intervene in incidents such as harassment, thievery, and pickpocketing, but this was the first time I witnessed their extensive role in a social event.

We saw today [on Saturday] on Istiklal Avenue that the core function of these was to hit, shout and curse. They act just like an element of trust (!) with their uniform blue caps, identical backpacks containing their diagonally placed truncheons, not different in fact from Donatello in the Ninja Turtles.

They look like the amorphous, civilian dressed, stubbly and often mustachioed paramilitary forces we were used to seeing in East and Southeast Anatolia in the 1990’s.

Wardens of the streets 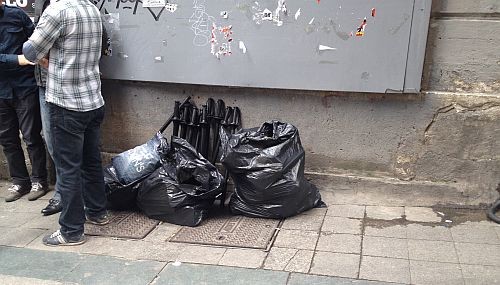 et’s start with the morning. Upon the Istanbul Governor Office’s announcement that “ferry service from the Anatolian to the European side will halt at 3 pm until further notice,” I crossed the Bosphorus to Karaköy with the 2:20 pm on boat, together with bianet coordinator Evren Gönül and executive editor Haluk Kalafat, and we went up to Istiklal through the tunnel.

These “Trust Teams” stationed at every street corner were the first to greet us. Though it also did not escape our attention that gendarmerie getting off their vehicles on Tünel Square were hanging out with the trust teams with the truncheons handed to them.

Anyhow, I do not know their real professions. The government seems to have told some people “you’re on the Trust Team” today, and these put on their blue caps and grabbed a street corner. They must have been ordered to stand there rather early since they seemed weary and had crouched onto the steps they could find. They all had a plastic bag in front of them (Çetinkaya shopping bags were especially noticeable, but I could not photograph them), containing their truncheons and probably some employer-issued provisions. 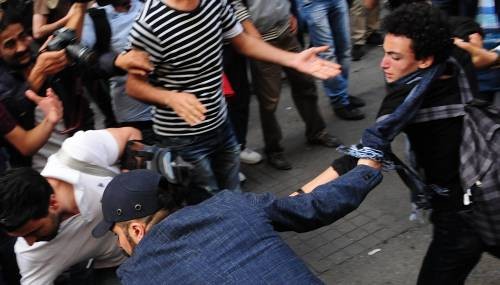 Our better-known riot police started taking the place of the “Trust Teams” after we passed Galatasaray. Again, all the street corners were taken and TOMAs, Scorpions, etc. were placed on streets of “strategic” value, like Mis Street. The employers of the police and the trust teams must have been very afraid of something that they piled 15-20 people at the entrance of every street.

The last side street before Taksim Square was completely occupied by the riot police with two TOMAs stationed behind them.

You don’t have to be good at Risk to understand the scenario; the riot police was going to drive protestors down Istiklal from Taksim Square, and the trust teams waiting down on the other end would hunt people with their truncheons.

However, when the clocks struck 6 pm, the number of people in blue caps around the Square started increasing extraordinarily.

I saw the first act of the blue-capped fellows in the violence they enacted on a 20-25-person group I took to be from The Peoples’ Democratic Party (HDP). They were recklessly dragging and trying to detain a “mixed sex” group of 15-year-old kids, and calmly beating people who objected to them. They even tried to detain a construction worker working nearby who asked, “Why are you behaving like this,” and later sent him back to his worksite alongside heavy swears.

That’s when I found out another characteristic of these fellows; the decibels at which they shout and the strange energy that forms in their eyes due to the laryngeal pressure that reaches the brain is well worth examination. 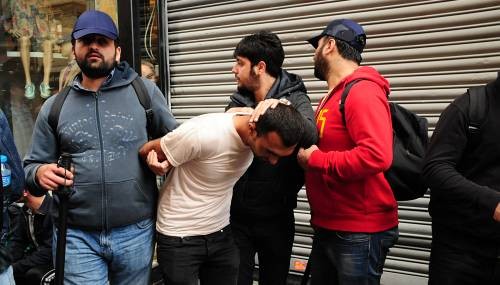 As far as we understood, the police had decided not to stage a mass attack until 7 pm. As soon as clocks showed 7, they immediately made announcements for show and the blue-capped fellows retreated to the left and right sides of Istiklal Avenue, and the TOMAs and riot police started moving about starting their accustomed game of catch.

But this time the trust teams left behind got the opportunity to show their talents at yelling loudly at journalists and passers-by and using their truncheons a la Donatello. 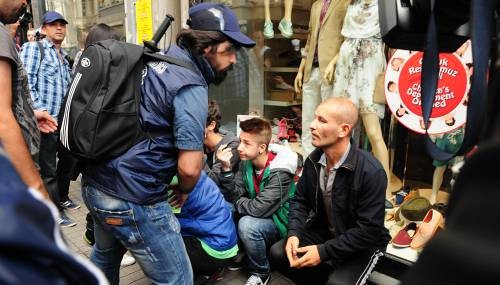 As I was taking photographs, the reply I got to, “I’m doing my job,” from the Trust Team who told me to “scram” even though I had my journalist ID card around my neck filled me with trust: “You’ll do your job wherever I tell you to do it. Now (heavy swear) off.”

I witnessed them beat people on their way to Galatasaray, push and shove an international female journalist, say “We can’t take anyone in because of these cameras, man,” and shout at an elderly woman trying to get home to the extent that the sound waves were pressing upon her eyes. I got my share of their beatings twice. I later found out that bianet employers also on Istiklal, Çiçek Tahaoğlu and Elif Akgül confronted this violence as well. 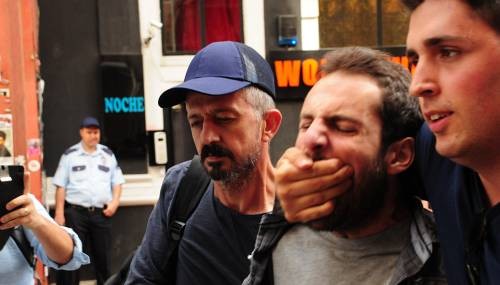 To make the long story short, we have blue-capped trust teams who were allegedly to serve against harassment, thievery, pickpocketing, etc. but have started to take their place behind the riot police in social events.

As I said, I have no doubt we will start to hear more of the adventures of these guys who aside from their blue caps and truncheons, bear no sign that they are licensed police.