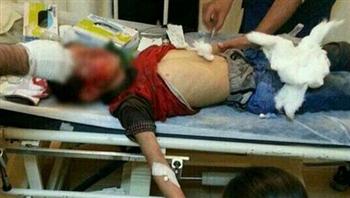 A 10-year-old child was seriously injured during a protest in the southeastern city Diyarbakır March 25, allegedly hit by a tear gas canister.

After Peace and Democracy Party’s (BDP) electoral rally at Azizoğlu Square in the Silvan neigborhood, a masked group pelted police with stone and shot fireworks at them, semi-official Anatolian news agency reported. As police intervened with tear gas and water cannon, “an object” hit the head of Mehmet Ezer, 10, according to Anatolian.

Witnesses said Ezer was hit by a tear gas canister, while Gülten Kışanak, the co-leader of the BDP, went to Diyarbakır Dicle University hospital where the injured child was treated. Doctors announced Ezer’s injury is still life-threatening, but they managed to stop the bleeding.

Leyla Zana, an independent deputy from Diyarbakır, was among the Kurdish politicians who visited the hospital. Zana said she had a phone conversation with Interior Minister Efkan Ala. According to Zana, Ala told her that an investigation is underway and an investigator will arrive in Diyarbakır on Wednesday.

15-year-old Berkin Elvan was shot by a tear gas canister during last year’s Gezi Park protests and died March 11 after spending 269 days in a coma, becoming a symbol of police violence in Turkey.

According to today’s reports, important leads were reached in the investigations regarding the deaths of Elvan and Burak Can Karamanoğlu, the latter having murdered by unknown assailants after the 15-year-old Gezi victim’s funeral in Istanbul’s Okmeydanı neighborhood March 12.