Emerging from a long history of resistance to the AKP’s spatial politics, Gezi made it possible to imagine a more egalitarian and democratic way of life. 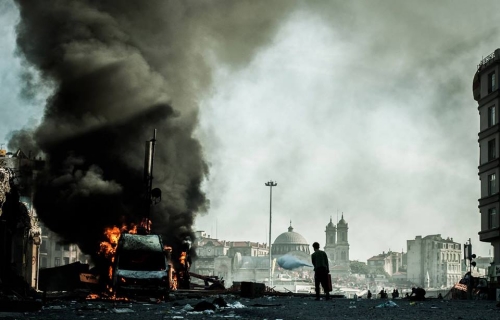 On December 17, 2013, Turkey woke up to another morning of dawn operations involving raids, home and office searches, and arrests that have become a routine in the legal and political landscape of the country in recent years. What was anomalous this time, though, was that among the people who were the target of the allegations and taken into custody were there the sons of three Justice and Development Party (AKP) ministers — the Minister of Economics, the Minister of Environment and Urbanism, and the Minister of Internal Affairs.

Other targeted government officials included a number of bureaucrats in these ministries; the major of an AKP-run district municipality in Istanbul, which is infamous for its urban regeneration projects that swept historical buildings and neighborhoods and, more importantly, displaced thousands of people; members of conservation boards in Istanbul; and a handful of businessmen, most of whom are owners of big construction companies that have grown considerably during AKP rule. In a short period of time, the accusations that would soon become a long list of corruption indictments were released to the media. Among them there were violations of the zoning code, zoning of urban lands under conservation for construction, the illegal provision of building permits, informal relations and bribery.

The sheer amount of money found during the raids, as well as the reach of the network connecting those people taken into custody, were definitely appalling to all. Yet, for those of us who have been following the AKP’s urban neoliberalism closely, the accusations relating to the construction sector — which has long been the engine of AKP’s growth-oriented economic policy — came as no surprise. After all, we had already been witnessing and documenting a great deal of informal practices and unlawful regulations and actions concerning zoning plans, building codes, construction permits, public-private partnerships, public tenders and the sale of public urban lands in urban transformation or mega projects.

Moreover, under AKP rule Turkey has been undergoing a radical legal and institutional transformation through which certain public institutions and ministries, such as the Mass Housing Administration (MHA) and the Ministry of Environment and Urbanism (MEU), were endowed with enormous powers in the use, planning, and governing of urban spaces and resources of all sorts. In this process the existing legal and institutional checks on their actions were massively reduced. The AKP government has been working hard to clear out all the legal obstacles to its neoliberal urbanism.

For instance, the recently legislated “Urban Transformation Act” — or “Disaster Act”, as it is known by the general public — was surely aimed at overturning all the previous legal barriers to neoliberal urban transformation projects, paving the way for all sorts of informal practices and arbitrary decisions. When things did not go well, the AKP cadres did not refrain from running over legal processes and decisions or creating de facto situations in which development projects were completed despite ongoing lawsuits or even verdicts. An example is the Sulukule neighborhood of Istanbul where an urban transformation project was already completed before the lawsuit against it was handled and finalized.

In short, the AKP government — which has placed most of its bets in the construction sector on attracting capital flows within the highly volatile atmosphere of global financial markets — created an urban environment in which the boundaries between formal/lawful and informal/unlawful have become extremely blurred. It was, in fact, this legal and institutional context that made it possible for the urban space to be turned into the means of capital accumulation under AKP rule. It was also in this context that dense informal networks of relations between big construction and real estate companies, the MHA, the MEU, and municipalities were established. This dramatically changed the physical and social landscapes of Turkey’s cities, Istanbul first and foremost.

Resistance Against Neoliberal Politics of Space

The Taksim urban renewal project through which the AKP government sought to take another decisive step towards the complete gentrification of the Beyoglu district, reflected almost all of the characteristics of the AKP’s shady urban politics briefly described above. If it were not for the resistance started by a handful of protesters against the implementation of the destination plan for Gezi Park, the project of building an “Ottoman-style” urban museum and shopping mall — which was decided by Prime Minister Erdoğan himself, designed behind closed doors, and sold to Istanbulites through an extensive PR campaign — would have been made a fait accompli by the AKP government, despite the objections of urban movements and the ongoing lawsuit at the time.

Many foreign mainstream commentators were puzzled at first by how a renewal project in a local urban park could spark such a massive countrywide rebellion, and why finalizing the project seemed to be so important and central to the political agenda of the national government and the Prime Minister himself. Yet, those who were aware of the AKP’s history of neoliberal policies, and who know how the government has been holding the people and their living spaces in a tight grip for over a decade, could easily make sense of what was happening and why.

Many things have been said about the Gezi uprising and many insightful analyses of it have been already offered. But if there is one thing that most observers share in common, it is that the resistance emerged against the increasingly authoritarian neoliberal politics of AKP that was eager to open living spaces, urban and rural, to capital accumulation on an unprecedented scale. The Gezi resistance, after all, was a culmination of many local resistance movements against urban transformation and mega projects; small and large hydroelectric, nuclear, and thermal power plants; mines, highways, bridges, and “crazy projects” of various other kinds.

These movements formed part of a broader resistance against the AKP’s reticulating neoliberal politics of space, aimed at defending the remaining commons and reclaiming the ones previously dispossessed and commodified. And it was no coincidence that this resistance transformed itself into neighborhood forums in many cities around the country, as citizens were longing for a platform for democratic engagement and participatory decision-making in the face of AKP’s unruly authoritarianism. In this sense, the Gezi resistance and the preceding spatial struggles already laid bare the contours of the AKP’s neoliberal politics that have redefined the rules of the game — and stood up squarely against it.

The Exceptional Commonness of Corruption

For those reasons, what leaked out three weeks ago from the alleged battle between the AKP and the Gülen Movement was, in fact, a belated statement of the known. However, now that the issue of corruption has become a matter of mainstream politics, there is a danger awaiting us, which is the well-known treatment of corruption as an exceptional situation in a system that is otherwise supposed to work somehow properly, cleanly and fairly. To speak metaphorically, corruption is viewed as a rot in the apple, and, it is commonly thought — though certainly not believed — that when it is removed, the remaining apple will be just as good to eat. In short, corruption is considered to be an exception to the rule, an unwanted situation in an economic or political system, which, in the absence of such situations, would be working just fine.

However, following the above discussion, corruption might better be viewed as an integral part of the AKP’s consolidating rule of informal relations and unlawful transactions. In other words, corruption — be it on a small scale or writ large — is better thought of as part of the rule rather than the exception in neoliberal spatial politics. In fact, evidence from many other national contexts points to diversified, intensified, complicated, and, at times, gentrified forms of informality, illegality or unlawfulness underlying neoliberalism.

Instead of the much-vaunted withdrawal of the state, neoliberalism often entails an active involvement of governments in the making of markets, generally resulting in even more complex relationships between the state and capital. Once governments adopt the policy of turning space into the means of capital accumulation in such a context, they face the problem of overcoming the somewhat protective legal, institutional and political configurations of the national developmentalist period at a speed required by the temporality of neoliberal capitalism in order to make the accumulation of capital possible.

What they end up with is a series of market-oriented legal and institutional transformations unfolding at an unprecedented pace, many of them highly questionable even from a liberal legal perspective, in order to make capital circulation and accumulation easier, less costly, and — most importantly — faster; which is usually further facilitated through shady political and economic relations and transactions. It is not surprising at all that one of Erdoğan’s first responses to the “corruption operation” was that those behind it were acting with the motive of undermining “Turkey’s speedy progress.”

The emerging picture is certainly a statement of the known. However, what leaked was in fact just the tip of the iceberg in terms of informality, illegality and unlawfulness, in which the corruption that has come to light is everything but an exception. Yet, it will not be surprising to see the AKP cadres trying to clean their hands from the accusations of corruption by making a revision in the cabinet and claiming to have gotten rid of the few rotten apples, or by arguing that the “corruption operation” is illegal or unlawful and responding with a counter-operation of their own.

Lawful and unlawful, formal and informal, clean and corrupt, and so on, are all socially, culturally and politically constructed (and contested) categories that are constantly defined and redefined through social and political struggles. It is certain that the AKP government will try hard to find ways to maneuver itself through this emerging struggle, especially when it is considered that the AKP has proudly marketed itself as the first and only governing party far from any form of corruption in the history of the republic.

The Gezi uprising and the previous rounds of spatial struggles of which it was a culmination, as well as the broader popular movement it has since unleashed, have been upfront confrontations with the iceberg of the AKP’s neoliberal spatial politics. Instead of watching the alleged battle between the AKP and the Gülen movement, or waiting for the “corruption operation” to be continued through legal mechanisms with the expectation that our political life will be finally cleared from corruption, it is absolutely imperative to continue the struggle against the transformation of our living spaces, urban and rural, into means of capital accumulation.

The Gezi protest that turned into a countrywide rebellion arose from the pre-existing experience of resistance against the neoliberal spatial politics of the AKP, making it possible to imagine otherwise a more egalitarian, libertarian and solidary way of living and relating to one another. It also made it possible to think about and discuss afresh alternative economic and political imaginations. In short, Gezi provided us with a repertoire of experiences, tools and relationships to think and act with. It is important in this context not to let the issue of neoliberal spatial politics slide into the backdrop of mainstream political debates and battles, and to continue our efforts to build a democratic politics from below with the experience, power and hope that the Gezi resistance gave us all.