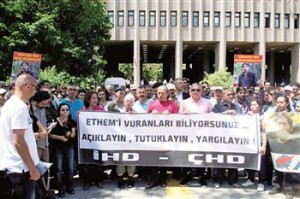 Ethem Sarısülük, who was allegedly shot by a police officer in Ankara, has been announced as brain-dead by his family, who demanded the responsible be brought to justice and expressed concern about the investigations.

Ethem Sarısülük, 26, who had been on life support since June 1, was today pronounced dead by his family.

Mustafa Sarısülük, Ethem’s brother, told the Hürriyet Daily News today that they were told by doctors that all of Ethem Sarısülük’s organs except his heart had failed as of today. Mustafa Sarısülük said they would continue their legal struggle to bring to justice the responsible.

Mustafa Sarısülük, however, said that the ministry official’s statement was political, adding that the family had made statements only depending on doctors’ statements.
He also said he was worried about whether those responsible for his brother’s death would be found out.

Kazım Bayraktar, lawyer of the Sarısülük family, said a police officer was seen shooting at the protesters in a video footage and that three witnesses made testimonies confirming the video. “On June 6, a notice was sent to Ankara Police Department demanding them to identify this police officer. No response came so far,” said Bayraktar.

“All the bullets of police officers are recorded. If a police officer uses a real bullet, it can easily be found out. Also the footage shows that all colleagues and team heads of the police officer, who shot three times, witnessed the incident,” Bayraktar told the Daily News today.

Bayraktar also said that the Sarısülük family declared that they wanted to donate Ethem’s organs.

However, Bayraktar said that the prosecutor demanded an autopsy, which would make a donation impossible.

Sarısülük’s severe condition may increase the number of casualties in the Gezi Park protests. Mehmet Ayvalıtaş, a 20-year-old who was hit by a car during the demonstrations in Istanbul, became the first casualty of the protests on June 2. Abdullah Cömert, 22, was killed the next day during clashes in Antakya when a tear-gas canister exploded as it hit his head.

Mustafa Sarı, a police commissioner, had succumbed to injuries sustained on June 5 after he fell from a bridge while pursuing protesters in the southern province of Adana.