“There is no evidence that supports Ahmet Atakan’s death with fall. How does the governor know his cause of death?” said Hatay Chamber of Medicines Chairman Selim Matkap after attending METU Resistance protestor Ahmet Atakan’s autopsy early this morning. 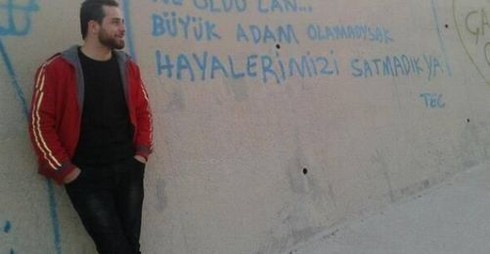 Early this morning, an autopsy has been made on Ahmet Atakan (23), a METU Resistance protestor who died due to a police gas bomb canister last night in the southern province of Hatay.

Selim Matkap, Chairman of Hatay Chamber of Medicines, shared the preliminary results of   autopsy with bianet.

Matkap reacted upon a statement by Hatay Governor’s Office which said “According to the preliminary data and information, Atakan might have fallen from a high building”.

Co-signed by prosecutor İbrahim Savaş from Adana Prosecutor’s Office, physicians Ali Eren and Ayşegül Bilen, the autopsy report said Atakan’s cause of death was due to “spinal cord cut, brain hemorrhage and inner bleeding along with blunt body trauma and broken skull bones”.

“Blunt trauma in the head”

Matkap said he arrived in Hatay Public Hospital as soon as he heard the incident and attended the autopsy in person.

“We haven’t found any evidence that Atakan might have fallen from a high building or place. We had two important findings: Lung trauma and head trauma.”

“We found compression fractures in the skulls which we call blunt trauma in medicine. There were also bruises. This is one of death causes. Therefore, you can’t say that he simply fell from a high place or building.”

“A governor shouldn’t make a statement right after such an incident anyways. This statement aims to influence public understanding before nothing is certain. We have found no evidence that would support a fall scenario. There were no broken bones in the legs or arms. There are usually broken bones in this sort of injuries.”

It was a gas bomb canister, eyewitnesses said

Matkap continued that he arrived to the incident scene after the autopsy and talked to eyewitnesses.

“Here is what eyewitnesses told me: ‘Two scorpion vehicles casted tear gas bombs as we were waiting at a side street as we were heading towards a main street. We were lost in the smoke. When the smoke scattered, we saw Ahmet on the floor.‘ This is exactly what people told me.”

Hatay Governor’s Office released a statement prior to the completion of autopsy, saying that Atakan’s cause of death could be due to “fall from a high building or place”.

On June 3, Hatay Governor’s Office released a statement in the aftermath of Cömert’s death, saying that he died due to shooting – a statement that was later on amended to “head injury”.

“The autopsy was not over. No results were announced in the meanwhile. How did the governor know that Atakan fell?” Matkap said.

Ahmet Atakan’s funeral has been transferred to Adana Forensics Institute for the completion of autopsy upon the order of Hatay Prosecutor’s Office. (AS/BM)