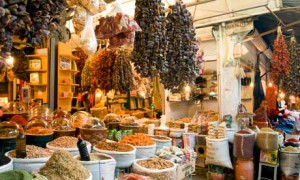 Antakya spice market has been an enduring symbol of the cultural and religious diversity in the city. Photograph: Alamy

Nearly a quarter of the 2 million people who have fled the crisis in Syria – some 460,000 – have made their way into Turkey, the UN high commission for refugees announcedon Tuesday.

While many find themselves at the Yayladagi refugee camp near the border in Hatay, the wider knock-on effect in the province, famous for being Turkey’s most tolerant, has been palpable.

Many of the Alawite and Sunni families living there are directly related to Syrian families, pulling the conflict closer to home. More than a third of the population is of Arab Alawite descent and many Alawites rally behind Bashar al-Assad, while Sunni villages often support the predominantly Sunni opposition.

Sited on one of the main squares in Antakya, the provincial capital of Hatay, “the Statue of Tolerance” may not have been the most subtle work of art – two massive hands raised towards the sky, one holding a globe, the other a cross, a crescent and a Star of David – but it was meant to celebrate religious diversity and harmony among Christians, Muslims and Jews. Now it has turned into a symbol of the rising sectarian tension.

Six weeks after the sculpture was unveiled, vandals repeatedly defaced the Star of David. The religious symbols were then promptly – and somewhat ironically – exchanged for an olive branch by the municipality. It may though, be just papering over the cracks.

“Ankara increasingly displays a Sunni stance, in line with other Sunni axis powers such as Saudi Arabia and Qatar,” said Tamer Yazar, a local journalist. “People in Hatay perceive this as taking sides in this sectarian conflict. Their open support of opposition fighters only made matters worse.” 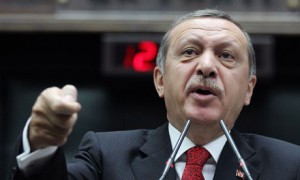 The sense that the government of the prime minister, Recep Tayyip Erdogan, is opting to play the sectarian card and deepen ethnic and religious divisions is reinforced by a law that will reorganise provincial boundaries next year and split Antakya along sectarian lines. All Alawite districts are to be gathered under a new name, Defne, while the majority Sunni quarters, including industrial zones and the airport, will become Antakya. A similar partition is to be applied in nearby Iskenderun, the biggest town in Hatay province.

While the authorities underline that the measure is aimed at simplifying administration and granting more autonomy to the local municipality, many see it as yet another step towards sectarian polarisation. In Antakya residents are calling the new demarcation line “the Berlin Wall”.

“The decision to split Antakya in two is the most shameful in the city’s history,” said Mehmet Ali Edipoglu, an MP for the main opposition Republican People’s party (CHP). “We told the AKP [the ruling Justice and Development party] this was dangerous, that this would pit people against each other along sectarian lines, but they did not listen. Despite all our efforts, we weren’t able to stop this proposition.”

A recent report published by the International Crisis Group (ICG) urged Turkey to “adopt a profile of a more balanced regional power rather than a Sunni Muslim one” in order to avoid possible spillover effects of the war in Syria.Officially 99.9% Muslim, Turkey has long failed to grant full freedoms to its religious minorities, and a sectarian tone increasingly taints the country’s foreign policy. Erdogan repeatedly accused the leader of the CHP, Kemal Kilicdaroglu, an Alevi, of being a supporter of Assad solely based on his religion, overlooking the fact that the estimated 20 million Turkish Alevis are not identical to Syria’s Alawites.

After twin car bombs exploded in the Hatay town of Reyhanli in May, Erdogan lamented “53 Sunni citizens” killed in the attack. The contentious comment did not go unnoticed in Antakya.

“There’s always been a Sunni undertone in Erdogan’s rhetoric and speeches on Syria, and his last remarks about Reyhanli angered people here a lot,” said Yazar.

“We are actually not sure if all those who died were Sunni, because until he said this nobody asked if they were Sunni or Alevi, Kurds or Turks. If Turkey has come to the point where the dead are identified in such a way, the situation has become very bad. It’s very dangerous.”

Local people in Reyhanli, a Sunni-majority border town, agreed. “There has never really been any sectarian talk here, we all lived as brothers. But since the problems with Syria this has changed,” said Mehmet Sanverdi, an unemployed lorry driver. “Some of the Syrian opposition fighters our government welcomes here try to cause chaos. They try to stir up trouble. Sectarianism is on the rise. Since the bomb attack, we are all afraid that something might happen again.”

Many emphasised that there was little to no animosity between Alawites and Sunnis in Hatay, blaming the Turkish government for mounting tension.

“The government uses polarisation along Sunni lines as a political tool to rally their base,” said Mahir Mansuroglu, head of the People’s House Association in Antakya. “They antagonise those that didn’t vote for them and use religion to stir things up. That’s always dangerous.”

He added that the government’s support for Islamist Syrian opposition groups such as Jabhat al-Nusra had angered many Antakya residents, especially Alawites. “These groups do not hide their enmity towards Alevis, and these same groups were walking around the streets in Antakya,” he said. “People felt threatened and suddenly like strangers in their own city. It did a lot of damage to daily life.”

So far, nobody believes that the current unease could turn violent, but many feel that the general climate of tolerance Hatay residents are so proud of is changing. “What would have been a small neighbourly dispute only a couple of years ago can suddenly reach a whole new level if the two parties happen to belong to different sects,” a fruit seller said. “Before, nobody used to care about religious affiliations but now people do. Unfortunately, much of this is fuelled by the government.”

“Hatay is famous for its tolerance, and we will bring this tolerance back,” Mansuroglu said. “There are no clashes between sects, and the tension has not reached a tipping point by any means. But we are not together any more either. Something has been lost.”