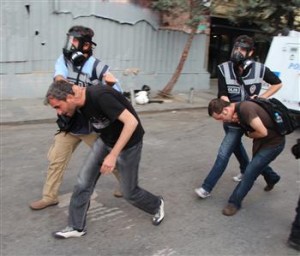 Interior Minister Muammer Güler allowed the inspectors to conduct a preliminary inspection over the cases in Istanbul. DHA photo

Police exercised “excessive force” in trying to quell the Gezi Park protests in Istanbul and İzmir, according to a recent report prepared by Interior Ministry inspectors.

The report demanded permission to open preliminary an investigation into some cases of the excessive use of force in Istanbul.

It also demanded permission to probe plainclothes police officers who were seen carrying sticks, as well as colleagues who failed to prevent arson at a ruling Justice and Development Party (AKP) building in İzmir during the Gezi protests.

Interior Minister Muammer Güler allowed the inspectors to conduct a preliminary inspection over the cases in Istanbul, according to daily Milliyet. With Güler’s permission, the inspectors will take testimonies from “suspected” police officers.

The incidents into which the inspectors will conduct a preliminary inspection include the case of a police officer seen spraying tear gas at Ceyda Sungur, the “woman in red,” in Gezi Park on May 28. A photo of the incident caused an uproar around Turkey and became one of the most enduring images of the protests.

In İzmir, inspectors examined plainclothes officers whose march through the streets with sticks was deemed an excessive use of force.

The inspectors also determined that some high-level police chiefs were involved in unlawful actions, particularly because they permitted police officers to use sticks, which are not among the list of materials used by police.

The report also faulted plainclothes officers for not wearing vests identifying them as police officers, while additionally declaring police chiefs negligent for failing to prevent protesters from lighting an AKP building on fire in İzmir.

The inspectors’ work on incidents in Ankara and Antalya is continuing.

A small group of people protesting the construction of a shopping mall in Taksim’s Gezi Park in May were exposed to police brutality, triggering nationwide protests against police violence for several months. Five people, including a policeman, have been killed in the protests.