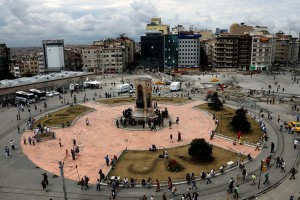 Taksim Square in Istanbul on Wednesday morning after police officers cleared thousands of protesters from the area. Photo: Yannis Behrakis/Reuters

Prime Minister Recep Tayyip Erdogan offered on Wednesday to hold a referendum to decide the fate of the park in central Istanbul that has become the locus of protests against his government and presented him with the most serious challenge he has faced in his decade in power.

But even as Mr. Erdogan seemed to indicate an attempt at compromise with the referendum offer, he coupled it with tougher language, saying that he ordered his interior minister on Wednesday to end all antigovernment protests within 24 hours.

The referendum was proposed after Mr. Erdogan met with a group of protesters in Ankara, the capital. It was the latest move in a seemingly confused strategy by the prime minister to resolve the crisis over Gezi Park in Taksim Square, with measures that included blaming a roster of supposed scapegoats, including the international news media, foreign financial interests and terrorists.

As Mr. Erdogan’s beleaguered government made its latest offer, thousands of protesters returned to the square after the riot police dispersed crowds Tuesday night and Wednesday morning with tear gas and water cannons.

In Gezi Park, which protesters are campaigning to save in the face of government plans to raze it and build a mall designed like an Ottoman-era army barracks, protesters on Wednesday night were girding for a police raid that they expected to come either overnight or Thursday morning. Many were skeptical of the government’s plan to hold a referendum, and some said it was not a suitable solution.

“They first tell us to go home, and then they present the idea of the referendum?” asked Bora Ekrem, 24, a student. “How can we trust them? If they were sincere about a vote, they would not ask us to leave the park. We will not leave until they declare the park is ours.”

The referendum was also seen as an attempt by the government to confine the antigovernment protests to the debate about the park, when the park controversy was in fact the catalyst for a broader outburst of civil unrest against what many Turks see as the increasing authoritarianism of Mr. Erdogan and his governing Justice and Development Party.

“A referendum would be a step forward, and I think we could win,” said another protester, Zeynep Pinto, 28, an interior designer. “But we want more than the park now. We want change.”

Experts criticized the idea of taking to a referendum what is essentially an urban planning decision that should be made by local representatives and not dictated by the prime minister, as such issues often are in Turkey. A court decision has temporarily halted construction at the park.

“A referendum is not a healthy and democratic solution in making decisions in planning urban spaces,” said Pelin Tan, an assistant professor of urban sociology at Kadir Has University in Istanbul.

At a meeting in Ankara with representatives of the Confederation of Turkish Tradesmen and Craftsmen, Mr. Erdogan dismissed international criticism of his handling of the protests and claimed that Turkish intelligence knew three months ago about local and foreign efforts to inflict chaos in Turkey, according to a confederation official who attended the meeting and spoke on the condition of anonymity.

“There are people who claim this is the Turkish Spring, but what they do not see is that Turkey has been living through its spring since 2002,” said Mr. Erdogan, referring to the year his political party won a majority of seats in Parliament.

“By tomorrow at the latest, the Gezi Park incident will end,” he continued. “This is a public park, not an area of occupation.”

After the meeting with the union, Mr. Erdogan met separately with a group of 11 people, including academics, artists and students, in Ankara. Taksim Solidarity, an umbrella group of protest organizers that had been excluded, said the meeting with the smaller group was an effort to mislead the Turkish public and would not produce anything while violence by the police continued. The group was also critical of the proposed referendum.

“There are 80-year-old trees in there, it is a public space, and there is an ongoing case in which the court has halted the project,” said Mucella Yapici, the spokeswoman for Taksim Solidarity.

On Wednesday, the Bianet news Web site said that Ethem Sarisuluk, a protester who was reportedly shot in the head by a plastic bullet on June 1, was brain-dead. Two other protesters and a police officer have been killed, while nearly 5,000 people have been injured in protests around the country.

Thousands of black-robed lawyers left courthouses around the country on Wednesday to protest the behavior of the police and the detention of several lawyers on Tuesday who had supported the protests.

“We are walking for social freedoms, human rights and the unlawful detention of our colleagues,” said Sevda Kurtulus, 29, as she marched with other lawyers down Istiklal Avenue toward Taksim Square Wednesday evening. “This was the last straw for us, and now we will all stand strong with Taksim.”

Speaking in Paris on Wednesday, Egemen Bagis, Turkey’s chief negotiator with the European Union, said protesters in Taksim Square had a democratic right to protest. But he said that terrorists had infiltrated the square and that Turkey had a right to defend itself from violence and provocation.

“Those who resort to violence will be dealt with like they are in all democratic societies,” Mr. Bagis said, contending that the situation was analogous to allowing Al Qaeda to put banners or posters on the Statue of Liberty or in Times Square. The statement referred to the many banners of leftist groups and some bearing the face of Abdullah Ocalan, the founder of the Kurdish separatist group the Kurdistan Workers’ Party, that flew in Taksim Square before it was raided by the police on Tuesday.

Asked how Mr. Erdogan could support democracy movements in Egypt and Syria, yet appear to be resorting to the kind of language used by some dictators, Mr. Bagis said such comparisons were baseless.

“After the first night of demonstrations, people in Western media said the Turkish Spring had started,” he said. “I highly condemn that approach. Comparing what is happening in Turkey to Arab Spring is out of sight, out of logic. Turkey is a democracy. There is a campaign to tarnish a democratically elected government.”

This article has been revised to reflect the following correction:
Correction: June 13, 2013
An earlier version of this article described incorrectly the Confederation of Turkish Tradesmen and Craftsmen. It is an umbrella group for tradesmen and artisans, not a labor union.