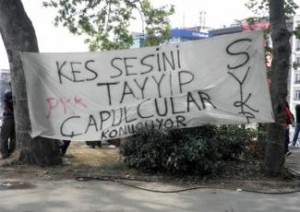 For most people around the world, the recent uprising against Turkey’s ruling Adalet ve Kalkınma Partisi (AKP) is still a puzzle. Why did a protest over a park lead to country-wide unrest so quickly? The Turkish government has explained what happened by resorting to a conspiracy theory, referring to an international “interest-rate lobby” that planned to overthrow the government. Yet, according to a KONDA research institute poll, forty-nine percent of protestors decided to join the protests after receiving news about excessive police violence, indicating this as the main trigger of the uprising.

To provide a snapshot of this phenomenon, take the example of a young female student of mine: she comes from a politically conservative family, and she had never taken part in any protests before Gezi. But on 1 June, she could not stay at home after seeing reports on social media that the police had harshly attacked peaceful protestors at Gezi Park. The Konda survey results suggest that her experience was shared by many others like her.

To understand how a small protest evolved so quickly into large-scale unrest, I suggest referring to the concept of self-fulfilling prophecy. The American sociologist Robert K. Merton defined self-fulfilling prophecy as “a false definition of the situation evoking a new behavior which makes the original false conception come ‘true.’”[1] Since late May, the Turkish government has acted on a set of worst-case-scenarios and false premises, most likely based on misleading or misevaluated intelligence, which escalated, united, and transformed existing and emerging protests into an uprising.

The year leading up to the Gezi protests had already been marked by a series of protests by Kurds, women, workers, LGBT individuals, students, and Alevis, all on top of AKP’s impressive and continuing record of anti-democratic policies: Turkey alone accounts for one third of all terror convictions in the world after 9/11 and has more journalists in jail than any other country, followed by Iran and China. Before the Gezi uprising started, Kurdish protesters had already helped to push the AKP into peace negotiations by exercising a combination of armed and civil disobedience (including a sixty-eight-day hunger-strike of thousands of Kurdish prisoners from September to November). Women displayed powerful resistance against the government’s plan to restrict abortion; the workers’ movement in the formal and informal sector escalated (examples include the ongoing Turkish Airlines strike and the Koç University resistance in April); LGBT protesters organized a strong public response against the killings of transgendered individuals; the student movement displayed a rapid expansion, especially after the riots at the Middle East Technical University campus in Ankara in December 2012; and Alevis protested the naming of the new Bosporus bridge after Sultan Yavuz Süleyman, an Ottoman sultan held responsible for the deaths of many Alevis in the early sixteenth century. It was perhaps only the Kemalist middle classes who did not take to streets before the Gezi protests, and their subsequent participation in the protest movement has provided the massive numbers that had previously been missing.

Given these broad-ranging forms of resistance, it is relatively easy to explain the unfolding of the Gezi uprising in June by looking at the recent past retrospectively. However, it was very difficult to predict what would happen, even by the end of May. The rapidity of the transition from these ongoing series of protests to a country-wide uprising occurred largely because the political choices of the AKP have been shaped by what I am calling self-fulfilling prophecy.

Here is the four-step pattern of self-fulfilling prophecy that the Turkish government has been trapped in: 1) an initial small wave of public protest starts; 2) the ruling party makes the observation that this is a conspiracy to stir up a larger uprising; 3) to prevent the conspiracy, the government exercises extreme police violence against protestors; 4) the extreme violence turns the protest into the very uprising that the ruling party was initially trying to prevent. This pattern has recurred a number of times since late May, when the government harshly repressed an initially small number of environmental activists in Gezi Park, based upon most likely inaccurate intelligence about a plot for a coup. This pattern is likely to recur in the upcoming months as well, since the AKP has still failed to grasp the logic of causality.

For example, following the same self-fulfilling pattern, the government has recently announced that it will pass a new law that will replace the existing private security forces on university campuses and in football stadiums with state police forces. The declared reason, again, is to prevent an uprising. Vice-Prime Minister Bülent Arınç said on 30 July that the government has received strong intelligence about a new large-scale wave of protest. It is said that these new protests will begin in September and will originate from campuses and stadiums.

On the same day, the public heard news about new government plans to disqualify any university students who took part in the resistance from benefitting from government scholarships. On 31 July, the Interior Minister announced a new plan to prohibit political slogans in football stadiums. According to these new proposals for football stadiums, political and ideological slogans will be prohibited; police forces will be deployed in place of the private security companies that are currently responsible for security during the games; plain-clothes police forces will be placed among the fans; football supporter groups’ actions in stadiums during the games, and their organizing activities through the social media, will be closely monitored; and alcohol consumption in stadiums will be severely restricted.

University students and football team supporter groups, most importantly Beşiktaş’ Çarşı, have been among the driving forces during the Gezi protests; it is very likely that the plan to insert police forces on campuses and in stadiums, along with other measures to repress political activism, will actually cause protests in September, when universities open and the football league begins. This has become an even stronger possibility after Prime Minister Erdoğan declared on 8 August that security forces would respond in the necessary manner to those who attempt to continue the riots in September. Most recently, on 10 August, Sports Minister Suat Kılıç explicitly threatened football supporters by saying “those who politicize the stadiums will pay the price.” He went on to say:

If some groups try to infiltrate in to supporter groups, they should know that Turkey is not a banana republic. We have been fighting terrorism for thirty years. We can handle that, as well. I don’t want to sound threatening, but know that it is not worth risking yourself and your team. Everyone must know that the law will be enforced. I hope that no one will be hurt, but this can happen. I want to warn, there will be electronic monitoring in stadiums. Sports prosecutors will watch the games in stadiums, and we are introducing electronic tickets to monitor the seat of every supporter.

Mr. Kılıç also warned university students: “They can try Gezi protests in universities. People should not ruin their lives, should not have criminal records.”

There is already a growing reaction in universities against these plans. Excessive police forces are already being sent to the training matches of prominent football teams, triggering the supporters of these teams to continue shouting anti-government slogans during the games. On 10 August, reacting against the government plan to ban political slogans at games, Gençlerbirliği supporters were chanting a quite creative slogan: “Political Slogan!”

Many Gezi protestors now think that the events have calmed down only because of the coming of the summer and Ramadan. Recently, a strong belief—indeed, a desire—has emerged among the public about a new wave of uprising to come in September. Thus, the government’s pattern of self-fulfilling prophecy recurs: a repressive measure against an expected uprising, based on what is most likely a false prediction, is likely to cause this very uprising itself to occur in September.

But why does the Turkish government keep following this pattern? One possible explanation is that Prime Minister Erdoğan has increasingly recruited AKP cadres with a penchant for conspiracy theories. For example, the recently appointed chief advisor to Erdoğan, Yiğit Bulut, is famous for his argument that “there is work going on to kill Erdoğan from afar through methods like telekinesis.” Bulut has been aptly called by the Financial Times “Erdoğan’s right-hand conspiracy theorist.”

But more important, the decade-long hegemony of the AKP has created an over-confidence among the party cadres regarding their capacity to mobilize and control Turkish society. As I noted in a previous Jadaliyya article, the AKP leadership has tried to conserve its popular base by resorting to a polarizing and non-accommodating stance towards the Gezi protestors. This strategy has seemed to work. If you talk to an ordinary AKP supporter—for example, a taxi driver in Üsküdar, a conservative neighborhood on the Asian side of Istanbul—you are likely to hear conspiracy theories about the Gezi protests: for example, Germany is against the new airport that would replace Frankfurt International, or England is against the new channel that the AKP is planning to build in the European part of Istanbul. Hence, the uprising comes to be seen as nothing but a western plot to undermine the successful projects of the AKP.

It is worth noting that there is no single unifying strategy within the AKP. Many people have started to talk about an emerging demarcation between Erdoğan’s supporters and those who have closer relations with the Gülen Movement, including President Abdullah Gül and Vice-PM Bülent Arınç. For example, Gül and Arınç have occasionally adopted a more tolerant approach towards the protestors. While the popular base of the AKP still seems to be convinced by the over-confident approach developed by Erdoğan and his close allies in the party, this other faction of the AKP has begun to question the long-term sustainability of this strategy, given the mushrooming of grievances in the western world about Erdoğan’s authoritarian policies and his odd targeting of international finance capital. But despite growing objections, Erdoğan is still able to rule the party and thus determine the course of events.

The blindness among Erdoğan’s close cadres has led them to disregard accumulated grievances within the society, driving them to see conspiracy theories as the most plausible explanations for the uprising against an otherwise unchallenged ruling party. Therefore, it is apt to say, referring back to Merton, that the false definition of the situation by the governing AKP (as an international plot aiming to provoke an uprising) evokes a new behavior (the use of state repression) that continues to make the original false prediction come “true” (the uprising occurs). This is what has happened since late May, and seems likely to happen in September as well.