Last Saturday night, the police detained 59 demonstrators who wanted to enter Gezi Park. Among the detainees only 8 of them were issued arrest warrants. In the Çağlayan courthouse, where those 8 protestors were held, it was claimed that three lawyers representing the protestors, two of which are women, were battered by the police because they wanted to take to take meals in to their clients. 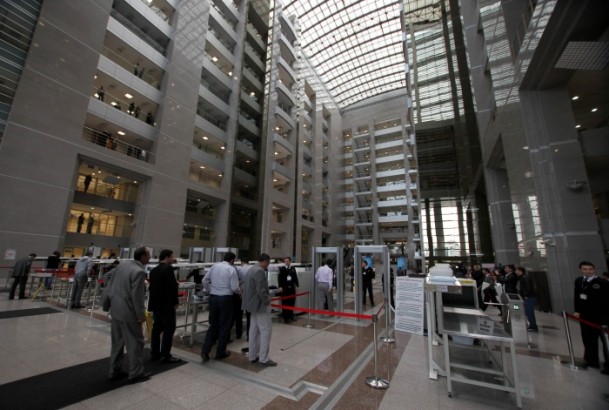 Lawyer Tolga Çakır expressed his experiences to Hürriyet while carrying the risk of cerebral hemorrhage from the beating:

“Both we and our clients have been up for three days hungry and sleepless. Our clients had been in Çağlayan Courthouse since the afternoon and had eaten nothing. Three of us entered the gate C of the courthouse in order to take them some things to eat. On the way to the section, where custodial prisons stand, we were blocked by the police. At the beginning, a reasonable discussion started between us. “You can’t take the food because they are not wrapped by saran wrap” they said. “Why would I poison my own client? And also I can wrap the food with saran wrap after I put the poison in it. What you say is not logical” we said.

“THEY REPEATEDLY HIT US AGAINST THE WALLS”
“Then we began to hope that we could take some food to our clients. First nothing happened but as we kept going, one of the cops told others “hold them, don’t leave” for them in order to block us. It was him who caused all the troubles; he was not chief but behaving as a chief. Right after this command they started to run after us. First they pushed me to get to my female colleagues.  Just then, they threw one of my colleagues, who was in the custodial prison, outside like they were hitting a sack against the wall. While trying to help, they repeatedly hit me up against the wall too.”

“HE USED FORCE TO GET MY CELLPHONE”
“Then, like eight, or ten undercover police officers separated me from my two colleagues and took me away from them while beating me up. When there remained some distance between us I was battered by the same number of polices in uniforms. Just then I saw two of my colleagues beaten up by undercover police officers. As I wanted to go near them I was blocked by the policemen in uniforms who had been holding me. For a moment I found an opportunity and tried to document the incident by shooting some photos with my cell phone. Once I only shot one or at most two photos, the cop tried to take my cell phone by hitting my hand against the wall. But I didn’t drop the cell phone; I was able to shoot one or two photos. At that point, some people stepped in between my colleagues and the cops to calm things down.

“THEY STAMPED ON THE FOOD”
“All the clamor just lasted 10 minutes. The cops stomped on the food and fruit juices we brought for our clients in front our eyes. What is the explanation of this action? What they care about is not compliance with laws. If that was the case they did not behave like that without compliance with laws. This is the proof that they reacted with grudge. A person who has a conscience would not make such difficulties about such a matter.

“WE WILL MAKE A DENUNCIATION”
“The assault scars on the backs and arms of my colleagues were determined by medical reports. My condition is a little bit more serious. I had a CT scan, chest, and stomach x-rays and ultrasound. I still have headache and nausea. The doctors examining my CT scan said “do sleep but make your wife wake you up every two hours. Do not be in the state of sleep for a long time, some serious may happen…” Again to the lawyers to our profession were attacked. What is important to us is the condition of our clients. Today we will make a denunciation for both our clients and for ourselves.”