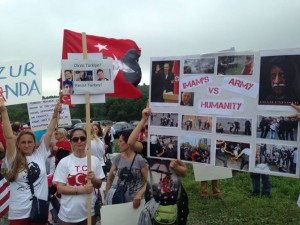 As many as 400 peaceful Turkish origin American protestors poured into the neighborhood of Imam Gulen’s compound in Poconos arguing that he is the most dangerous islamist on the face of the earth. Turkish Americans emphasized his influence in the turmoil that Turkey has been facing for the past decade and most recently the brutal attacks by Turkish militia police on ordinary people who have been protesting to prevent Taksim Gezi Park from being converted into a shopping mall. Since then the police – so-called Imam’s Army – who was joined by civilians who were supporters of Gulen movement and Erdogan’s fascistic regime, has killed at least 5 teenagers or ones in early twenties, who were peacefully demonstrating. Thousands injured including at least 11 people losing eye from tear gas canisters which the police directly aimed at the protestors instead of to the air. The group carried signes commemorating those killed.

Gulen fled Turkey in 1998 to avoid prosecution on charges that he was attempting to undermine Turkey’s secular government with the objective of establishing an Islamic government.

Few concerned American parents also joined the protestors charging Gulen to fraud Americans through his more than 100 charter schools throughout the US. They said his illegal activities included forcing teachers/employees to pay back certain percentage of their salary to the Movement, called ‘Hizmet’ in accordance with ‘Tuzuk’ (http://www.charterschoolwatchdog.com/tuzuk—a-contract-to-steal.html), bringing unqualified teachers from Turkey leaving out American teachers in places where unemployment reaches double digits, to teach at charter schools that are funded by American taxpayers. They also claimed one of his schools in Minnesota expelled scores of special-need students.

The group then drove to Saylorsburg city hall to continue the protest. They concluded the daylong event with the decision to file a 520-page criminal complaint.

For more see the following links on Gulen: