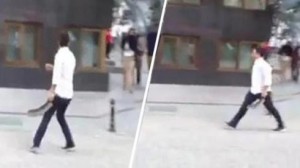 Suspect Flees Abroad As Judge Releases For “No Runaway Risk”

Sabri Çelebi, a man who attacked Gezi Park demonstrators with a machete, has been released by a court. “All newspaper covering the issue before final court decision are responsible for this,” advocate Hacer Yılmaz told bianet.

Sabri Çelebi, a man who attacked Gezi Park demonstrators around Taksim Square with a machete and injured Kaan Polat from his ear and cheekbones, has reportedly fled abroad.

However, it turned out that it was too late for Sabri Çelebi, as he reportedly fled abroad.

“We were expecting his runaway”

“We were expecting him to run away, but Hürriyet newspaper published an article saying that his arrest warrant was issued even before the court announced its order. Though the order was read before my presence at 5:30 pm yesterday. And I will only receive the written version of decision today.”

“Newspapers laid the ground for Çelebi’s escape by publishing articles only based on rumors. They must make a public apology.

“It set example for other aggressors”

On Saturday Çelebi attacked Gezi Park protestors and was detained by police. A court released him the next day.

Istanbul 30th Peace Criminal Court ruled that there was no need to arrest Çelebi for reasons associated with “the nature and extend of crime, evidence in hand, arrest being a measure, suspect having a permanent residence and no risk for run away.

“We have seen how the first decision was wrong,” advocate Yılmaz told bianet.

“This is  not only about Sabri Çelebi, because several other men with machetes, batons and knives showed up in streets after his release. Çelebi was released on Sunday and another man fired a gun in downtown Istanbul.”

“The judge made a wrong decision by ruling the release with cliche reasons like ‘suspect permanent residence’. That decision underestimated the social dynamics of an outbreak.”

Advocate Hacer Yılmaz claimed that the release order encouraged other aggressors across the country.

“They think like ‘We can attack with machete and courts release us’. That was the reason why we made an objection in the first place.”

“Because,” she continued, “it prevented the realization of attitudes and acts by aggressive people who don’t respect different opinions and attack others once encouraged by authorities.

“Now those who think of attacking people with machetes or batons know that they might be arrested.” (AS/BM)