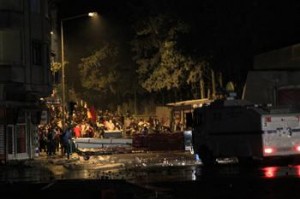 The clash between police and protesters lasted for several hours. AA Photo

Turkish police intervened against nearly 3,000 people protesting the murder of a 19-year-old Gezi Park protester who died of his wounds July 10, after staying in a coma for 33 days, in the southern province of Hatay.
Following the funeral of Ali İsmail Korkmaz, who succumbed to his injuries in hospital after being beaten by unidentified people in Eskişehir in protests on June 2, thousands gathered in the Armutlu neighborhood of Hatay.

Police warned the group to leave the area but the protesters set up a barricade to resist against a police intervention, and blocked the circulation of traffic on Gündüz Street.

After a four-hour-long wait, police used gas bombs and water cannons on the group with the support of gendarmerie forces dispatched to the area.

The clash between police and protesters lasted for several hours.

Ali Ismail Korkmaz was attacked by a group of people while trying to escape from police at a demonstration June 2 in Eskişehir, three days after Gezi Park protests started in Istanbul and began to spread across the country. 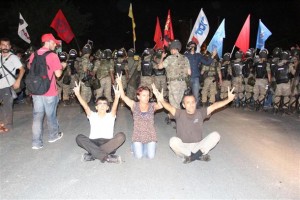 Korkmaz’s family said he went to a hospital after being beaten by unidentified people. However, a doctor examined him and sent him home. Korkmaz then slept at home but was unable to speak when he woke up the next day. He was later diagnosed with a cerebral hemorrhage, caused by a blow to the head.

Video footage obtained by a expertise committee has showed men with sticks and baseball bats beating protesters on the streets of central Eskişehir on June 2.

The men are seen beating protesters violently in the footage which was taken by some 40 different security cams, daily Radikal said.

However the identities of the beaten protesters could not be determined and nearly 20 minutes of the records are missing which are thought to be the parts showing Korkmaz being beaten.
12 July 2013
Source: hurriyetdailynews.com