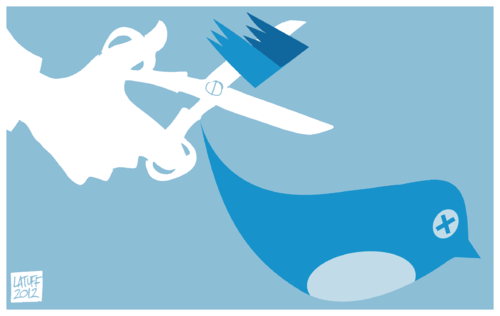 The wave of resistance that started at Gezi Park on the 29. of May in Istanbul and has since spread all over Turkey once again revealed a deep connection between real time communication on social media and social movements. Throughout the protests, social media platforms have become the primary news source in this environment where the mainstream media have proven themselves to be the site of disinformation or inertia. But even more importantly, social media have become indispensable as a source of information for those who have been actively organizing on the ground, cooperating with different national and international groups, showing solidarity, gathering evidence against the security forces and providing medical and legal assistance.

As #DirenGeziPark? (#ResistGeziPark) gained in momentum and the role of social media in the course of the events became evident, the Prime Minister and other spokespersons of the government started publicly denouncing these media platforms. Each statement and press release from the government targeted at disqualifying social media as an untrustworthy and dangerously manipulative source of information.

In an interview, the Prime Minister declared that social media is a “menace to society” and it is full of slander and lies. Vice-Prime Minister Bulent Arinc stated that social media platforms are centers of mass manipulation and the government could block/cut off access if they wanted. What is most unfortunate in Arinc’s statement is the government’s open threat to put further constraints on the basic freedoms associated with the use of the Internet. But the threats were not limited to legal constraints, AKP’s social media advisor Ali Sahin claimed that “A false tweet is more dangerous than a car bomb. Legal arrangements regarding social media is a must” and hinted at an upcoming arrangement to control the Internet based on dubious legal grounds using disciplinary actions.

A number of disciplinary interventions with respect to current use of social media have already occurred. Istanbul Governor Huseyin Avni Mutlu mentioned today plans for a “social media operation”. The attorney General of the Republic in Ankara received a court decision to investigate the cellular phones of 230 citizens in custody, most probably with the intention to examine social media use as well as the social networks of these citizens.

As Alternatif Bilisim, we object to the scapegoating of the social media through denunciations by government spokespersons. On social media platforms, citizens of Turkey have found an opportunity to instantly share with the world the events unfolding on the streets as well as their democratic demands. It was through this mediated communication that it was possible to put on the map the disproportionate and excessive use of force by the police, an ongoing situation that was eventually admitted by the government, including the Prime Minister. Without the mediation of social media, authorities and those interested could not have been informed as extensively of the extend and brutality of the events occurring on the streets. Social media platforms hence functioned as communication outlets that filled the gap left wide open by the mainstream media. The latter remained blind to the events and avoided any “critical” reporting. Numerous cases of violation of fundamental rights as well as police violence have been documented by citizens and brought to the world’s attention. We believe these reports have played an instrumental role in preventing the further deterioration of tensions with the police. Furthermore, social media platforms played a crucial role in organizing rescue and treatment of injured people, which ranged from those having asthma attacks to those suffering lethal wounds. The successful use of social media has in that sense has even proven to save lives.

To sum up, in face of the current political power, social media platforms have turned into a conduit through which the citizens could make their voices heard, and through which they could demonstrate to the world the injustices they have been subject to. The prominence of social media in the protests has been akin to their use in the Arab Spring and the Occupy protests. We don’t want to imagine the possible consequences of the violence that could be asserted by those currently in power in the absence of the Internet and the mediation of social media platforms.
We are concerned!

The discomfort government representatives are experiencing with social media are evident in their communication with the press. In their public statements, these powerful figures are also signaling that they are intent on increasing censorship on public information outlets and in applying further controls to social media and the Internet.

On the ground, dozens of people have been taken into custody for their use of Twitter during the protests. The lawyers that had access to the files of these people stated that the imputed accusations are not supported by substantial evidence. Regardless of the dodgy basis of the accusations, it is evident that the government is repurposing Internet and mobile technologies to monitor communications and illegally collect personal information. State surveillance on the Internet and the resulting oppression of citizens that express their views and support towards the protests through the social media is not acceptable.

We are concerned that in the coming months the AKP government will become more strict when it comes to enforcing existing repressive laws that apply to information, press and the internet. Government spokespersons have also signaled that, when needed, they are ready to introduce new laws in this respect. We are specifically concerned that the government will enhance existing practices of surveillance, e.g., DPI, filtering, and related disciplinary measures. If their statements materialize, be it through legal or disciplinary measures, the effects are likely to reflect negatively upon fundamental rights and freedoms — as well as on the role of Internet intermediaries towards governments vs. citizens.

We call upon the government and other political powers to take a peaceful and conscientious stand towards the protests as well as the use of social media, and to act in a manner that will calm down citizens.

We declare that we will use every democratic right we have and take all possible legal steps to counter attempts to illegitimately limit and take away the constitutional rights and freedoms of citizens in a democratic society.

We also call upon all citizens to claim their fundamental right to access the Internet and related services. We invite all citizens to use these conduits more effectively and accurately. #ResistSocialMedia