(Reuters) – Tens of thousands of people took to the streets in Turkey’s four biggest cities on Sunday and clashed with riot police firing tear gas on the third day of the fiercest anti-government demonstrations in years. 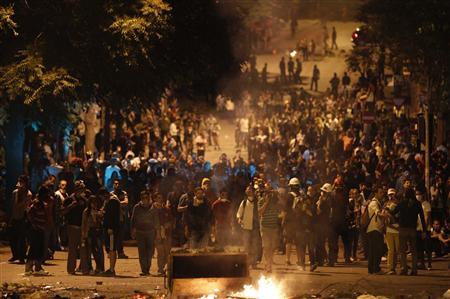 By Jonathon Burch and Humeyra Pamuk

The din of car horns and residents banging pots and pans from balconies in support of the protests resonated across neighbourhoods in Istanbul and Ankara late into the night, as hundreds of demonstrators skirmished with riot police.

Roads around Prime Minister Tayyip Erdogan’s office in Istanbul were sealed off as police fired tear gas to push back protesters, and police raided a shopping complex in the centre of the capital Ankara where they believed demonstrators were sheltering, detaining several hundred.

Erdogan blamed the main secular opposition party for inciting the crowds, whom he called “a few looters”, and said the protests were aimed at depriving his ruling AK Party of votes as elections begin next year.

Interior Minister Muammer Guler said there had been more than 200 demonstrations in 67 cities around the country, according to the Hurriyet newspaper.

The unrest erupted on Friday when trees were torn down at a park in Istanbul’s main Taksim Square under government plans to redevelop the area, but widened into a broad show of defiance against the Islamist-rooted Justice and Development Party (AKP).

Erdogan said the plans to remake the square, long an iconic rallying point for mass demonstrations, would go ahead, including the construction of a new mosque and the rebuilding of a replica Ottoman-era barracks.

He said the protests had nothing to do with the plans.

“It’s entirely ideological,” he said in an interview broadcast on Turkish television.

“The main opposition party which is making resistance calls on every street is provoking these protests … This is about my ruling party, myself and the looming municipal elections in Istanbul and efforts to make the AK Party lose votes here.”

Turkey is due to hold local and presidential elections next year in which Erdogan is expected to stand, followed by parliamentary polls in 2015.

“Today the people on the street across Turkey are not exclusively from the CHP, but from all ideologies and from all parties,” senior party member Mehmet Akif Hamzacebi said.

“What Erdogan has to do is not to blame CHP but draw the necessary lessons from what happened,” he told Reuters.

The protests, started by a small group of environmental campaigners, mushroomed when police used force to eject them from the park on Taksim Square.

As word spread online, the demonstrations drew in a wide range of people of all ages from across the political and social spectrum.

The ferocity of the police response in Istanbul has shocked Turks, as well as tourists caught up in the unrest in one of the world’s most visited destinations.

Helicopters have fired tear gas canisters into residential neighbourhoods and police have used tear gas to try to smoke people out of buildings. Footage on YouTube showed one protester being hit by an armoured police truck as it charged a barricade.

The handling of the protests has drawn rebukes from the United States, European Union and international rights groups.

On Friday, the U.S. State Department said it was concerned about the number of injuries and on Sunday, Laura Lucas, a spokeswoman for the White House National Security Council, reiterated the importance of respect for freedom of expression, assembly and association.

“Peaceful public demonstrations are a part of democratic expression, and we expect that security forces will exercise restraint and that all parties will continue to work to calm the situation,” she said.

For much of Sunday, the atmosphere in Taksim Square was festive, with some people chanting for Erdogan to resign and others dancing. There was little obvious police presence.

But in the nearby Besiktas neighbourhood, riot police fired tear gas and water cannons to keep crowds away from Erdogan’s office in Dolmabahce Palace, a former Ottoman residence on the shores of the Bosphorus.

There were similar scenes in Ankara’s main Kizilar square.

Erdogan is due to fly to Morocco on Monday as part of an official visit that also covers Algeria and Tunisia. Sources in his office said his trip would go ahead.

He remains by far Turkey’s most popular politician, but critics point to what they see as his authoritarianism and religiously conservative meddling in private lives in the secular republic.

Tighter restrictions on alcohol sales and warnings against public displays of affection in recent weeks have also provoked protests. Concern that government policy is allowing Turkey to be dragged into the conflict in neighbouring Syria by the West has also led to peaceful demonstrations.

On Sunday, Erdogan appeared on television for the fourth time in less than 36 hours, and justified the restrictions on alcohol as for the good of people’s health.

“I want them to know that I want these (restrictions) for the sake of their health … Whoever drinks alcohol is an alcoholic,” he said.

(Additional reporting by Can Sezer in Istanbul, Umit Bektas, Orhan Coskun and Parisa Hafezi in Ankara, and Roberta Rampton in Washington; Writing by Nick Tattersall and Humeyra Pamuk; Editing by Mike Collett-White and David Brunnstrom)