Erdoğan’s strategy since Gezi has been to polarize the electorate, disowning those who speak against him and trumpeting his role as a fighter for those who support the party. But his indifference to Elvan’s fate exhibited cruelty rather than strength. 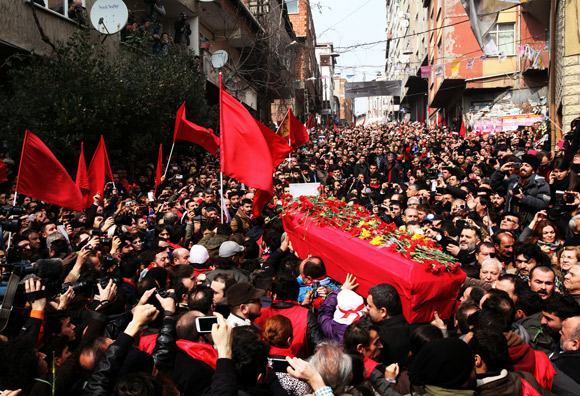 Mourners gather at the funeral of Berkin Elvan. Photograph by Ahmet Sik/Nar/Redux.

On Tuesday, a fifteen-year-old Turkish Alevi named Berkin Elvan died, sparking the country’s largest anti-government protests since last summer, when a sit-in to save Istanbul’s Gezi Park grew into nationwide clashes. Nine months ago, at the height of the Gezi protests, Elvan went out to buy a loaf of bread in his neighborhood, Okmeydani, and was struck on the head with a tear-gas canister. Like many neighborhoods in the city, Okmeydani had been the site of violent daytime clashes between police and protesters, even as families carried on with their normal lives. Elvan fell into a coma, and Okmeydani hospital, where he was treated, quickly turned into a site of vigil and protest. His wide smile and mop of black hair became a symbol of police brutality, while his depleting body weight, for the protesters, was like a ticking clock charting the government’s inaction. Even the loaf of white bread he had been sent out to buy took on a totemic significance. When Elvan died, after two hundred and sixty-nine days in a coma, weighing just over thirty pounds, protesters hoisted loaves above their heads like torches.

Much has changed in Turkey since Gezi, which represented an unprecedented challenge to Prime Minister Recep Tayyip Erdoğan and his Justice and Development Party (A.K. Party). The brutality of the riot police—whose excessive use of tear gas, water cannons, and rubber bullets to disperse the crowds was applauded by Erdoğan—exposed a corroding democracy, while the protests themselves revealed the Turkish public’s dwindling patience. Erdoğan stayed in power, but the development of Gezi Park, which had sparked the demonstrations, was halted. In December, a corruption investigation that targeted government officials and influential businessmen seemed to signal a bitter rivalry between Erdoğan and his former ally, the Islamic cleric Fethullah Gülen, whose followers within Turkey are said to have significant influence within the police and judiciary, and number some five million worldwide.

Both sides took up the fight, during which hundreds of people perceived to be Gülen loyalists in the police and judiciary lost their jobs. A rattled public was left to sort through leaked phone calls presented as suppressed evidence of corruption, without any certainty of what was true and what had been concocted to distort the truth. (The leaks were widely believed to have come from Gülen’s supporters.) Laws were passed through parliament to censor the Internet, criminalize “informal” medical care (such as what might be offered in field clinics during protests), and strengthen the executive control over the judiciary.

As discontent with Erdoğan and the A.K. Party became more intense and more visible, the Prime Minister only seemed more confident in his authoritarian measures: the Turkish public—even those who had risked injury and death to protest last summer—were more audience than actors. Earlier this month, the option of developing Gezi Park was reopened.

On Wednesday, protesters poured through the turnstiles of the Şişli metro station, chanting, “Berkin Elvan is immortal,” and calling for Erdoğan’s resignation. Elvan’s portrait was emblazoned on posters and pinned to the jackets of protesters. Some had come from Okmeydani, a middle-class neighborhood a few miles north of Taksim with a significant Alevi population, where his funeral drew a crowd of thousands. They carried red carnations and loaves of bread, and held newspapers in the air, many of which had printed a photo of Elvan’s mother, her mouth open and her head flung back in mourning, on the front page. “God didn’t take my son, Erdoğan took my son,” Elvan’s mother had said, and freshly painted graffiti bestowed a new nickname upon the Prime Minister: Killer.

Outside the metro station, the dense crowd churned in the direction of Taksim Square, about a mile and a half away, occasionally pausing to chant the names of the six people who had died during Gezi. Later that night, the protesters were met by riot police armed with tear gas and rubber bullets. A hundred and thirty-nine people were arrested. But when I saw the crowd move through Şişli, it was vast and peaceful. A woman watched in awe from the second floor window of a cafe. “It’s magnificent,” she said.

Erdoğan responded by calling the protesters “fakers,” and implying that they had decided to foment chaos because they knew the A.K. Party would not be defeated in the upcoming local elections, scheduled for March 30th. It was further evidence that the Prime Minister, in his third term and facing the greatest challenges since he first took power over a decade ago, views all dissent as a seditious threat to his authority.

But it also suggested something darker, which the Turkish public—even those who do not support the A.K. Party—has been slower to accept: that Erdoğan, who wept on television last August after the daughter of an Egyptian Muslim Brotherhood leader was shot by security forces during a protest in Cairo, would not also weep for a dead Turkish boy. For some, the explanation for the discrepancy was obvious: Elvan was an Alevi, a member of a persecuted Shia minority; Erdoğan has angered the community in the past by emphasizing the Sunni identity of most Turkish Muslims. Moreover, Elvan was at a Gezi protest, even if he had only gone out to buy bread. During the nine months Elvan was in a coma, Erdoğan did not mention him in public, nor did he reach out to his family. In one speech to his supporters, Erdoğan questioned whether Elvan had really been out buying bread; he warned the audience, “Don’t be fooled.”

The A.K. Party once represented a coalition whose appeal reached beyond a religious base, but Erdoğan’s strategy since Gezi has been to polarize the electorate, disowning those who speak against him and trumpeting his role as a fighter for those who support the party. But his indifference to Elvan’s fate exhibited cruelty rather than strength. “How can we be a nation if we cannot unite even to share the pain of a family whose 15-year-old son was killed by a canister fired by a police officer?” the journalist Orhan Kemal Cengiz wrote in the Turkish daily Today’s Zaman. “How can we have peace in a society if we cannot share these basic values?”

Two more people died during Wednesday’s protests. A police officer had a heart attack in Tunceli, in eastern Turkey. In Okmeydani, twenty-two-year-old Burak Can Karamanoğlu was caught in a fight between two unidentified groups, and suffered a fatal gunshot wound. This time, Erdoğan responded, condemning the protesters and pointing out that Karamanoğlu had just returned from military service. To many, it was a further provocation. “A fifteen-year-old kid dies after being in a coma for months and an entire country is basically in mourning, with the exception of the Prime Minister,” Aslı Aydıntaşbaş, a newspaper columnist and commentator on CNN Türk, told me. “He refuses to utter a single word of condolence. He’s made a point of mentioning [Karamanoğlu’s] death, but not the fifteen-year-old, who was an Alevi, who died while protesting Erdoğan and his rule. Erdoğan clearly sees that he stands to benefit electorally by furthering the divide in Turkey.”

“In the past, people felt the need for government officials to pay lip service to basic values and equality among citizens, to the basic fundamentals of democracy,” Aydıntaşbaş continued. “Now, I don’t think anybody feels the need to pay lip service of any kind. It’s the beginning of a civil strife in Turkey.”

On Thursday, crowds amassed to mourn Karamanoğlu. His procession, like the one for Elvan a day earlier, attracted large numbers of marchers, who chanted together, swarming around the coffin, and retraced a portion of the route Elvan’s mourners had taken on Wednesday. Heartbreak over the death of a young man was intensified by anxiety over the dangerously tense atmosphere—an anxiety that is likely to grow in the weeks before the local elections. Like Elvan’s parents, Karamanoğlu’s family seemed to accept that their son’s death had political significance, even if it paled in comparison to their personal grief. Elvan’s father had openly criticized Erdoğan, whereas Karamanoğlu’s father condemned the protesters, accusing them of vandalizing neighborhoods. But in his grief, unlike Erdoğan, he spoke in unifying terms. “Take pity on this nation,” he said. “Take pity on these children.”