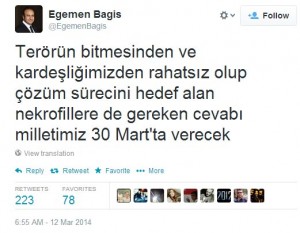 Turkey’s former chief negotiator and EU Affairs Minister Egemen Bağış called those who went to the funeral of Berkin Elvan, a teenage boy who died after nine months in a coma as a result of being hit in the head by a tear gas canister during the Gezi Park protests last year, necrophiliacs, a comment that has drawn wide denunciation and vehement criticism.

“Those necrophiliacs who are uncomfortable with the end of terrorism, our brotherhood [with Kurds] and who are targeting the settlement process [to end the three-decades-old Kurdish dispute and armed conflict] will get their response from voters on March 30 [the day of local elections],” Bağış tweeted on Wednesday, as thousands of people flocked to İstanbul’s Şişli district to pay their final respects to Berkin at the funeral ceremony.

His tweet exploded on social media and has drawn the ire of thousands with vehement criticism flooding websites and Twitter.