The death of 15-year-old Berkin Elvan, who spent 269 days in coma after being hit by a teargas canister last June, is sparking renewed protests in Turkey. 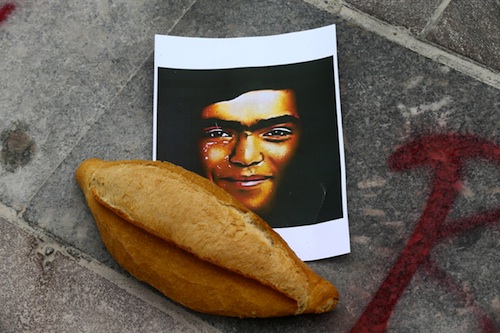 On Tuesday, Berkin Elvan died. He was 15 years old and weighed a mere 35 pounds (16 kilograms) at the time of his death. He was in a coma for the last 269 days. Millions were monitoring his health via social media up until the last minute, hoping he would survive. He did not. Berkin’s death instantly prompted a fury of reactions both in the social media and out in the streets, comparable only to June of 2013, when every inch of my social media feed was filled with Gezi tweets and every inch of the streets with protesters.

June 16 marked the perforce end of the week-long Gezi Park occupation. The previous day police had cleared the area of protesters with an unprecedented intensity of force, seizing and destroying all tents and placards belonging to the protesters and issuing mass arrests. The small castaway protests continued in the surrounding neighborhoods, police clashing with the protesters, using plastic bullets and shooting teargas canisters directly at them.

Okmeydanı, a modest neighborhood where Berkin lived with his parents and two older sisters, was one of these places. Berkin left early in the morning to buy a loaf of bread for breakfast from the local deli, a job that traditionally falls to the youngest of the family. It is a common and happy sight seeing small kids carrying loaves of bread to their homes in the mornings, nibbling the top of the loaf. This day, Berkin’s mom had offered to go instead, since the streets were dangerous. He refused. “Your feet hurt mom,” he said before leaving. “You cannot run from the teargas. I will be faster.” He was not fast enough. A teargas canister fired by a police officer hit him on the head, putting him in a coma.

After the police cracked down on the Gezi protests, people retreated to neighborhood forums. Folks gathered in their local parks all over the country to discuss the future of Occupy Gezi. Some forums had thousands of participants, some just a dozen. The consensus seemed to be that it was time for a new phase for the movement, which began to concentrate on solidifying the momentum that had been created by the protests; preserving the “Gezi Spirit,” as protesters called it — and even strategizing how to make the AKP (Justice and Development Party) lose the upcoming local elections of March 30. Yet neither the forums nor the social media were devoid of dissidence. Some in the Gezi crowd, most not just emotionally exhausted but physically injured as well, insisted that the street protests had to continue. Others argued that going out on the streets was way too dangerous and had no productive value at that juncture in time.

In the following months, the massive street protests slowly began to wane. Although there were crowded marches for the LGBT pride and international women’s day, anti-government protests prone to severe police violence were noticeably smaller in numbers than expected. Taksim Solidarity, the umbrella NGO that was at the forefront of the occupation, called for a demonstration on December 27 with the hashtag “1 million to Taksim Square” (1 Milyon Taksime), in protest against the infamous corruption scandal erupted on December 17. 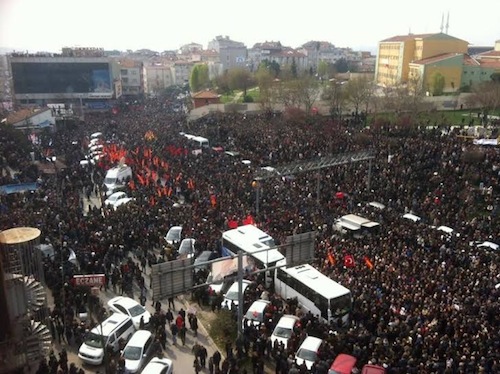 Some critics argued that any form of street protest would steal away the spotlight from the atrocity of the scandal. Others claimed that Erdoğan would actually benefit from turmoil in the streets, using the opportunity to polarize the nation and distract his supporters from the severity of the scandal by shifting the public discourse. The resulting protest was a far cry from a million. Police quickly dispersed the hundreds who reached the square; the protest never had a chance to gain momentum. The nationwide protest on February 22 against the internet censorship bill, which has since been passed, was also scarcely populated compared to the 2011 one (the first large-scale protest organized via social media in Turkey, joined by hundreds of thousands throughout the country).

It seems, however, that the spell has now been broken after news of Berkin’s death emerged on Tuesday. While police attacked the crowd keeping vigil in front of the hospital, social media erupted with the hashtag “Berkin Elvan is immortal” (Berkin Elvan Ölümsüzdür), now a worldwide trending topic. Almost immediately, my Facebook and Twitter feeds were filled with posts of anger, mourning and frustration. Profile pictures were changed to photos of Berkin or a plain black background. Artworks depicting Berkin as Saint-Exupéry’s Little Prince or an angel popped up out of nowhere. People started going to the hospital without any official invitation. High school and university students boycotted their classes all over the country and took to the streets.

People used the hashtag “We got our orders from Berkin” (Emri Berkin’den Aldık), referring to Erdoğan’s statement “I gave the orders to the police,” during the violent police crackdown on Occupy Gezi. Local delis closed or started giving away bread for free. In Berkin’s Okmeydanı, folks left loaves of bread wrapped in black ribbons on doorsteps. TVs and radios cancelled their shows; bars and clubs shut down; opposition parties announced that they will silence their election vehicles, which regularly tour the cities with loud megaphones. DİSK (the Confederation of Revolutionary Trade Unions of Turkey) called for a nationwide strike.

Come night, it was a big déjà vu with flashbacks of the Gezi days. Hundreds of thousands were out in the streets across the nation chanting “murderer Erdoğan!” Barricades were formed. Graffiti went up depicting police sketches of Erdoğan with the tag line “wanted”. Police violence was ever present, injuring dozens. Those who stayed at home banged pots and pans in solidarity. Vigils were held in New York, London, Athens, Stockholm and Paris — among many other cities. On Wednesday we went out again, this time for Berkin’s funeral. Thousands first went to Okmeydanı cemevi; a house of worship for the Alevi community. At 3 pm the biggest crowd I have ever seen in a funeral gathered at the Şişli Mosque. Then the crowd walked to the local cemetery where Berkin was put to his eternal rest. 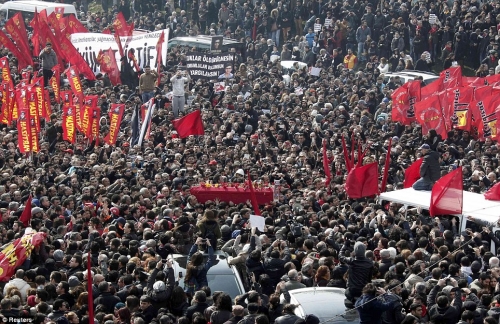 There were no clever or sarcastic slogans this time; instead hundreds of thousands shouted “murderer AKP!”. After a few minutes of silence somebody would shout “thief!” or “murderer!”, almost as if the murder was happening right at that moment and he or she was calling for help. The crowd would follow. The same slogans were shouted whenever the crowd saw a police station or officers lined up on the streets, right to their faces. The slogans were replaced by silence and a feeling of deep sorrow in the cemetery.

When the crowd dispersed, the policemen — who until that point had not responded — attacked. Water and tear gas filled the streets with countless injured. Nothing we haven’t seen before. But today, the Gezi spirit that had been lying dormant inside us for the past months was sparked again. All the logical arguments people had against mass protests went out of the window. People are protesting, knowing all too well they will be gassed, attacked, possibly injured and maybe even killed. A 15-year-old boy did this.

In Turkey, bread is sacred. If it accidentally falls on the floor, the tradition taught to us by the elderly is to pick it up, kiss and touch it on the forehead three times over, a ritual also practiced if ever the Quran touches the floor. Bread also symbolizes labor, hard and honest work: things that are in scarce supply nowadays if you listen to Erdoğan’s alleged leaked phone conversations with his son Bilal. In the wiretapped recordings, Erdoğan is heard ordering his son to get tens of millions of dollars of cash out of the family house (his exact words are: “zero the money”), worried that the ongoing investigation over corruption charges could harm his family.

Today one of the slogans of the demonstrators was: “Tayyip, send Bilal to buy bread!” One of the top trending tweets of the day was: “their children steal billions, our children are killed getting bread.” “We are going to buy bread” emerged as a synonym for “we are going to protest.” Today, people across Turkey are back in the streets, and it looks like the Gezi spirit is as fresh as a day in June.