An enormous outpouring of grief and antigovernment rage during the funeral procession for a teenage boy felled by a police tear-gas canister turned into another mass confrontation with the Turkish authorities on Wednesday as mourners clashed with antiriot squads in Istanbul, Ankara and Izmir. At least one person was killed. 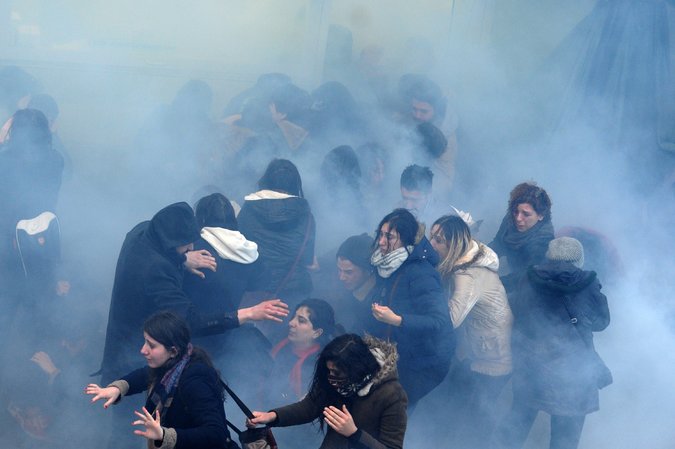 The new unrest came a day after protesters battled with police officers in at least 15 cities over news that the boy, Berkin Elvan, 15, had died. He had been comatose with head trauma since June, when Turkey was first engulfed with antigovernment protests against the decade-old tenure of Prime Minister Recep Tayyip Erdogan, who is seen as increasingly authoritarian.

The boy, who was struck by a tear-gas canister while buying bread, has become the newest symbol of simmering anger at Mr. Erdogan and his Justice and Freedom Party, known as AKP, and over the tough police repression of political dissent and a recent corruption scandal that has entangled the top echelons of the ruling party.

More than 100,000 people converged in Istanbul to participate in the boy’s funeral procession to a cemetery. The burial itself was peaceful as hundreds of riot police were deployed nearby.

“He was our hope, he was our miracle, he was our son, brother, everything. We were waiting for him to wake up but we unfortunately lost him,” said Damla Atalay, 32, a lawyer, who marched in a convoy behind the coffin. “We are here because this little boy is part of us, it could happen to any of us, to our son, brother.”

Some mourners quietly held loaves of bread, while others carried a banner with pictures of eight people killed by the police during June protests with a message aimed at Mr. Erdogan and his associates: “Their children are murderers, thieves, ours are immortal,” the banner read.

The violence began after the funeral, as police officers armed with tear gas, water cannons and rubber bullets thwarted large crowds in Istanbul who tried to stop traffic or move toward Taksim Square, the center of the June protests, which was sealed off.

One protester was killed, an unspecified number were hurt, some with serious injuries including broken bones, and more than 70 people, including children, were detained in Istanbul alone, the city’s Bar Association said. The dead person was identified by the association as a 21-year-old killed in a clash between political youth groups in the neighborhood where the mourned teenager had lived.

In Istanbul, dozens were injured by police rubber bullets and tear gas as ambulances crisscrossed the Taksim Square area. At least one person was hit in the head by a tear-gas canister on Istiklal Street, and was taken to the hospital with severe bleeding, according to a local television reporter. Mr. Erdogan has praised the police performance in June, although several international organizations, including the European Court, criticized what they called an excessive use of tear gas and water cannons. Mr. Erdogan has said nothing about Berkin Elvan’s death.

President Abdullah Gul, who sent condolences to the boy’s family, had requested that the local authorities handle protests with care. But he also had urged protesters to “do everything to prevent this from happening again.”