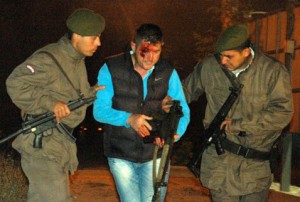 Lieutenant Colonel Necati Metin, second in command at Mugla Gendermarie Headquarters, is injured by the ttear gas shot of the police. Lieut. Colonel was willing to talk to the demonstrators protesting in solidarity with Gezi Park events.

MUGLA – Lieutenant Colonel Necati Metin, second in command at Mugla Gendermarie Headquarters, wanted to negotiate with people who poured on the streets for demonstrations in support with Taksim Gezi Park. He is injured on his face by a canister while the police was projecting tear gas on the protesting group. Lieut. Colonel Metin is undergoing treatment at the hospital.

Last Saturday, a group gathered at Muğla city center to protest the Taksim Gezi Park events. The group grew bigger in number as people chanted slogans. Hereupon,  the police asked for a support team from the gendermarie. Gendermarie brigades are sent to the area. Police and gendermarie took precautions.

Lieutenant Colonel Necati Metin (46), second in command at Mugla Gendermarie Headquarters arrived at the area where protestors were located. Metin who was not dressed in army uniform, while directing the military group, wanted to approach the protestors. While he was talking to the group in order to convince them for a peaceful end to the demonstrations, the police projected tear gas to the area. As the police intervened to the group,  Lieut. Colonel Metin was hit by a canister on around his eye.

Risks losing an eye
Lieut. Colonel Metin who works in Muğla for 5 years, is taken out from middle of a crowd by the soldiers and removed to Muğla Sıtkı Koçman Unversity Hospital immediately.

Lieut. Colonel Metin is diagnosed that he has edema on his right eye due to injury and has risk of losing the eye. It is informed that the doctors will decide whether an operation might be necessary after the examinations to be carried out.

Inquiries being hold
Muğla Chief of Police Ahmet Akbal said that “Judicial and administrative inquiries are being hold about recent events in relation to the demonstrations. Muğla is one of the major touristic centers of Turkey and receives millions of visitors from Turkey and abroad. Such demonstrations and events would hinder the tourist inflow. They do scare people. We wish the demonstrations to be carried out democratically and ask protestors not to throw stones or other objects to our police.”