Riot police and hundreds of protesters clashed on Tuesday after a teenager boy died from wounds he had received during an anti-government demonstration last year. The chaos escalated hours after it was announced that 15-year-old Berkin Elvan had died in an Istanbul hospital. 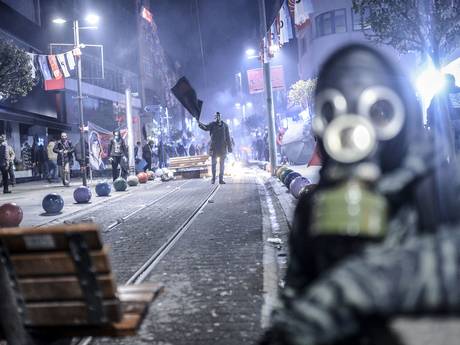 A protester waves a black flag during clashes with riot police in Kadikoy, on the Anatolian side of Istanbul, on March 11, 2014

Berkin’s family said he was on his way to a shop to buy bread when he was caught up in a street protest and struck in the head with a high-velocity tear-gas canister.

Outside the hospital, protesters held a vigil and threw stones at police vehicles. Officers responded with tear gas.

Meanwhile, at the centre of the capital, Ankara, and in Istanbul, Turkey’s largest city, officers used tear gas, water cannon, and rubber bullets against anti-government protesters – who fought back by throwing stones and bottles.

There were also reports of protests in at least nine other cities. Authorities could not provide details on injuries to protesters or police officers.

Berkin’s death has raised the number of fatalities from last summer’s protests to at least eight, including a police officer.

Several police officers were questioned about Berkin’s head injury but no one has been charged.

The anti-government demonstrations started out as a small, local protest against government plans to turn a central Istanbul park into a shopping mall.

Police say 3 million people demonstrated from May to September, during which human rights groups estimate around 8,000 people were injured. Many were struck at close range by gas canisters.