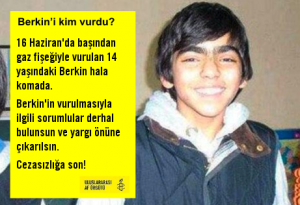 Berkin Elvan was not a looter.  He was not even a protestor. He was – and continues to be – a victim.

Fourteen years old at the time, Berkin went out to get bread for his family during the Gezi protests, then he was was hit by a gas canister fired by police.

As Amnesty’s report on the Gezi Protests describes:

Between 7 and 7.30am on 16 June Berkin Elvan left his house. Even at that early time of the morning, a demonstration was taking place and there were a lot of riot police around together with water cannons. Berkin Elvan’s father told Amnesty International he [Berkin] walked from a side street onto the main road where the demonstration was taking place, he was he was hit in the head by a gas canister fired from a distance of  approximately 20-25 metres. His family were informed of the incident at around 7.30 am. He was taken to the Okmeydanı Teaching and Research Hospital and immediately received an emergency operation on his brain and a second operation later that day to stop a severe brain haemorrage. He has been in a coma since 16 June.

Now fifteen years old, Berkin remains in a coma and, according to recent news reports, his weight has fallen to only 16 kilos (a little over 35 pounds).

Lawyers representing his family are quoted in the press as saying:

Berkin who was 45 kilos when he was shot weighs now 16 kilos. His young body has resisted for 267 days to the damage caused by the gas canister fired by the police the same way that our people resisted against fascism. But that resistance is gradually decreasing and the damage to his inner organs is growing due to the fact that his brain functions are very low. He is currently connected to a life support unit…

Amnesty continues its campaign for justice in the case of Berkin Elvan and other victims of police abuse.  Meanwhile, the Turkish press reports that a vigil for Berkin at the hospital where he is being treated was disrupted by the police:

Police staged a crackdown on dozens of sleeping activists waiting at Şişli’s Okmeydanı Hospital early this morning as they kept vigil for 15-year-old Berkin Elvan, who has been in a coma since June 2013 after being struck in the head by a gas canister.

Upwards of 10 people were reportedly detained during the operation.

Officers, who had kept their distance since the vigil started on March 7 when Elvan’s condition worsened, moved in early in the morning to clear out dozens of people who had heeded a call from the boy’s family to come show solidarity.

Protesters reportedly erected barricades inside the hospital to prevent the police from advancing further and entering within the facility.