The first cracks in Mr. Erdogan’s aura of invincibility came in the summer, with violent street protests against yet another mall that was to replace a popular Istanbul park. Mr. Erdogan emerged from that with his image tarnished but his power seemingly intact. But he was jolted once again in December by a sweeping corruption inquiry aimed at his inner circle. That continues to unfold, further chipping away at his power. 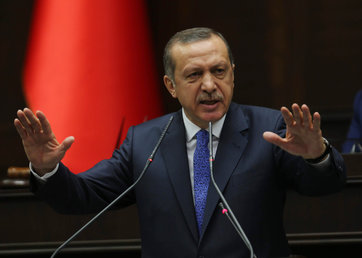 Mr. Erdogan’s economic adviser, Yigit Bulut, then did little to reassure skittish investors, suggesting that the prime minister would do something that would be “very positive for the markets,” but did not say exactly what Mr. Erdogan’s plans were.

The remarks only added to jitters in financial markets, which have battered the Turkish stock market and in recent weeks sent the currency, the lira, to historic lows. While Turkey has suffered along with other developing nations from the “tapering” of bond purchases by the United States Federal Reserve and the threat of rising global interest rates, its problems go beyond that to basic questions about the stability of the government and its ability to grapple with the economy’s problems.

To some extent, Turkey and Mr. Erdogan are victims of their own success, having created an attractive investment climate that brought in billions in dollar-denominated lending, particularly after the financial crisis of 2008. Officials in Western capitals, including President Obama, came to see him as the prime example of a leader who could meld democratic values, Islam and economic prosperity.

But much of the money was funneled to a group of insiders who made fortunes while building malls and other developments that increasingly lacked sound economic underpinnings. Now, with bond investors fleeing and interest rates rising, Mr. Erdogan’s economic turnaround is in jeopardy of unraveling in a toxic stew of bad loans, accusations of cronyism and the appearance of seat-of-the-pants economic stewardship.

The first cracks in Mr. Erdogan’s aura of invincibility came in the summer, with violent street protests against yet another mall that was to replace a popular Istanbul park. Mr. Erdogan emerged from that with his image tarnished but his power seemingly intact.

But he was jolted once again in December by a sweeping corruption inquiry aimed at his inner circle. That continues to unfold, further chipping away at his power.

At the same time, his ambitious foreign policy, which sought to position Turkey as the leader of a region in turmoil, failed amid the continuing civil war in Syria, where Turkey has supported the rebels, and the collapse of the Muslim Brotherhood government in Egypt, an important ally that Mr. Erdogan enthusiastically supported.

The political attacks, economic instability and higher interest rates come at an inopportune time for Mr. Erdogan, as he and his Islamist-rooted Justice and Development Party, known by its Turkish initials A.K.P., face a series of elections that will determine if he remains in power.

Local elections in March, and especially the contest for the influential post of mayor of Istanbul, will be the first test. In the summer, voters, for the first time, will cast their ballots in a nationwide election for president, a post Mr. Erdogan is hoping to capture.

Mr. Erdogan, a pious Muslim who has been in power for more than a decade, is Turkey’s longest-serving prime minister and, analysts say, its most consequential leader since Mustafa Kemal Ataturk, the secular founder of modern Turkey. Mr. Erdogan has burnished his power with his charisma and his appeal to the country’s religious masses, a previously oppressed class under Turkey’s former secular rulers.

But more than that, experts say, Mr. Erdogan owes his staying power atop Turkey’s political system to his stewardship of an economic boom that has elevated Turkey to the global stage.

“Ultimately, he’s popular because he’s done well with the economy,” said Murat Ucer, an economist at GlobalSource Partners, an economic research firm, and a former adviser to Turkey’s Economy Minstry. “And Turks, I think, will want to continue to get rich.”

Following a series of economic overhauls in the early 2000s, just before the A.K.P. came to power, Turkey’s economy surged by an average of more than 5 percent a year. Per capita income more than quadrupled over that time, to $11,000 a year from $2,500, according to Sinan Ulgen, the chairman of the Center for Economic and Foreign Policy Studies, a research organization in Istanbul.

With the boom in Turkey’s private sector, Mr. Erdogan’s government expanded social services, such as health care, and infrastructure, providing ordinary Turks with a sense of economic empowerment.

“Turks got to know what it means to be treated as a basic citizen, in many different ways,” Mr. Ucer said.

Even so, there was plenty of evidence, even before the recent instability, of cracks in Turkey’s economic facade.

Despite the impressive growth, unemployment, which has improved, remained relatively high at about 9 percent. An explosion of consumer credit in recent years has raised fears, even as it has powered a new consumer society and ensured that all the new shopping malls sprouting in Istanbul would have a steady flow of customers.

In November, the police captured a man near Mr. Erdogan’s office in Ankara, the Turkish capital, who appeared to be carrying a bomb.

At first, the police thought he was trying to assassinate the prime minister. But it turned out that the bomb was fake, and that the man was trying to stage a protest over his mounting credit card debt, which local news reports put at $17,000.

On Thursday night, a group of men loudly debated the economy in a cafe in Ortakoy, an Istanbul neighborhood on the shores of the Bosporus. One of the men, Levent Koray, a fruit stall owner, spoke about what he viewed as the diminishing economic prospects for men like him.

“For the last 10 years, because of the opportunities given to us by the prime minister, we could come to this cafe and play games freely while relaxing and talking about football, our children, our dreams, but now all we do is talk about our financial problems,” he said.

Big business, he said, has ultimately fared better under Mr. Erdogan, pushing out small players like him.

“Ten years ago, I was the fruit king of this district,” Mr. Koray said. “Now, my stall is in the shadows of three giant grocery chains that were given land by the government. People walk straight past me now.”

With the street protests, Mr. Erdogan was able to order a harsh police crackdown to restore order.

Mr. Erdogan has countered the corruption inquiry — believed to be led by followers of the exiled Muslim cleric Fethullah Gulen, who have taken up posts in the police force and judiciary — by purging the state of police officials and prosecutors. But with the economy, with its reliance on foreign capital, Mr. Erdogan is largely powerless, forced for now to defend the currency with the higher interest rates he deplores.

Throughout these crises, Mr. Erdogan has been able to rely on the support of Turkey’s religious conservatives, who account for roughly half of the electorate. But now, in the midst of economic uncertainty, his popularity is slipping.

A poll released this week by Metropoll, an Ankara-based firm, showed Mr. Erdogan’s job approval at a historic low of 40 percent, compared with 48 percent in December. In 2011, after winning a third term, his popularity rating stood at 71 percent.

Yet even more is at stake for Mr. Erdogan than his electoral hopes. His ambitious economic goals for Turkey to reach by 2023 — the 100th anniversary of the Turkish republic — are now in peril. Some of his grandest construction projects, like a third airport for Istanbul that officials have said would be the world’s largest, are in jeopardy.

“There is no economy to finance these projects anymore,” Mr. Ucer said. “A lot of these things will probably get shelved.”