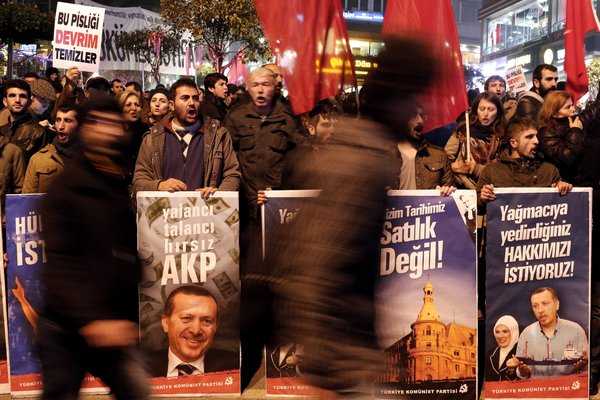 A corruption investigation that has encircled the Turkish government moved an ominous step closer to Prime Minister Recep Tayyip Erdogan on Wednesday, as three top ministers whose sons have been implicated abruptly resigned — and one of them, on his way out the door, said Mr. Erdogan should step down as well.

The resignations, coming only hours after the ministers welcomed Mr. Erdogan at the Ankara airport as he returned from Pakistan late on Tuesday, were enough to inspire new talk of a deepening crisis, which Mr. Erdogan has repeatedly denounced as a foreign plot.

But the words from one of the departing ministers were considered stunning, coming from a political party known for silencing dissent. That instantly raised the significance of the entire inquiry and left members of the Turkish public wondering if they were witnessing the collapse of their Islamist-rooted government of the last decade.

“Now it seems the situation has changed completely,” said Kerem Oktem, a Turkey expert and research fellow at the European Studies Center at the University of Oxford. “It seems the ring around Erdogan has gotten tighter.”

Later, as a dramatic day came to a close, Mr. Erdogan emerged from a meeting with President Abdullah Gul in Ankara, the Turkish capital, and announced that seven other ministers would leave his cabinet, some of whom are departing as part of a long-planned shuffle so that they can run for mayors in coming elections. One of the late-night departures included the European Union minister, who has been implicated in the corruption investigation.

The investigation became public a week ago with dawn police raids on the offices of businessmen and others close to the prime minister. But Wednesday was the first time that someone who had been in Mr. Erdogan’s hierarchy — a confidant, no less — left the strong implication of the prime minister’s entanglements in some of the real estate deals at the heart of the case.

The crisis strikes a sharp contrast to the image that Turkey has projected as an exemplar of a prosperous, Muslim-majority country based on democratic principles. A NATO member, Turkey has been embraced by the United States and Europe as a force for stability in the tumultuous Middle East, and the country has sought to play an important role in shaping the outcome of crises in Syria, Egypt and with Iran’s nuclear program. With Mr. Erdogan now preoccupied with political survival, Turkey’s role in the region and its relationship with the West are in question.

The corruption inquiry has targeted the ministers’ sons, a major construction tycoon with links to Mr. Erdogan and municipal workers, and it centers in part on allegations that officials received bribes in exchange for ignoring zoning rules and approving contentious development projects. No one has been convicted, but the issue has struck a nerve among the Turkish public, especially Istanbul residents. They have become increasingly resentful over the dizzying pace of development and riches amassed by a new, pious economic elite, with a strong hand in the construction industry, which rose to power alongside Mr. Erdogan and his associates.

Analysts questioned whether Mr. Erdogan can weather the crisis by blaming foreign powers, appealing to the religious sentiments of supporters, and evoking the ghosts of Turkey’s past by likening it to the war for independence it fought after the breakup of the Ottoman Empire.

The developments on Wednesday came amid rumors in the local news media that more damaging allegations from the investigation were coming and would link directly to Mr. Erdogan and his family.

“We can see the prime minister is trying to take precautions against something that could be bigger,” said Ozgur Unluhisarcikli, the head of the Ankara office of the German Marshall Fund of the United States, a research organization. Mr. Unluhisarcikli said that as the investigation inched closer to Mr. Erdogan personally, he would “have more difficulty containing the damage.”

The public has been riveted by a flow of sordid details of the investigations leaked to the news media — with photographs of piles of cash in the bedroom of a minister’s son and reports that the chief executive of a state-owned bank had $4.5 million in cash packed in shoeboxes.

On Wednesday morning, Economy Minister Zafer Caglayan and Interior Minister Muammer Guler, whose sons are among 24 people arrested in the corruption investigation, stepped down. A few hours later the environment and urban planning minister, Erdogan Bayraktar, closest among the three to Mr. Erdogan, said in a live television interview that he had resigned under pressure. He also said Mr. Erdogan was personally involved in unspecified property deals that are a focus of the investigation.

Soli Ozel, a columnist and professor at Kadir Has University in Istanbul, said: “This is extraordinarily dramatic. Bayraktar was someone who was very close to the prime minister. This is someone you’d expect to fall on his sword without question.”

The resignations came after a week in which Mr. Erdogan’s government sought to purge the police forces of those it believes are behind the investigation, which has been linked to Fethullah Gulen, a popular Muslim spiritual leader in exile in Pennsylvania who has millions of followers in Turkey, including some who hold high positions within the police and judiciary. Mr. Erdogan and others have called them a “criminal gang” and a “state within a state.”

In a televised speech on Wednesday afternoon, Mr. Erdogan used some of his strongest language yet to denounce his former allies in the Gulen movement and promised to dismiss them. “We will root out the bad apples or whatever is necessary,” he said.

Dozens of high-level police officials, and hundreds of other officers, already have been removed. Reports emerged in the Turkish news media on Wednesday that prosecutors were pursuing other high-level officials, but that new police officials installed by the government had resisted pursuing them. This essentially highlights a power struggle within state structures.

Turkey has faced many upheavals, with coups and power struggles that sometimes turned violent, but the current crisis is something new: a clash between two Islamist rivals that had once been united in overhauling the political system by pushing the military from politics.

Once ruled by secularists backed by powerful military generals, Turkey has seen the rise over the last decade of Mr. Erdogan’s Justice and Development Party, known by its Turkish initials A.K.P., that was rooted in political Islam but also included other partners, among them liberals and some on the nonreligious right.

Most of the liberals and the nonreligious no longer support the A.K.P., and now that Mr. Erdogan and Mr. Gulen, who represent different Turkish Islamist traditions, are basically at war, the party is at risk of collapsing, said analysts.

In another setback for Mr. Erdogan, a prominent A.K.P. lawmaker who was a former interior minister resigned from the party on Wednesday — not because he was implicated in the corruption investigation, but because he was disgusted by how the government was handling it, dismissing police officers and attacking the judiciary.

“It seems that within the A.K.P. things are spiraling out of control,” said Mr. Oktem, the research fellow at Oxford.

The question is whether the clash will upend the Turkish political system. “This kind of power struggle between two different Islamist groups might make the non-Islamist, secular groups more powerful, in Turkey’s case,” Mr. Oktem said.

Mr. Erdogan’s assertions of a foreign plot, implying American and Israeli subterfuge, have angered the United States and damaged his once strong personal bond with President Obama. The State Department, in a statement issued Tuesday, said attacks in the pro-government Turkish news media against American officials were “deeply disturbing.”