3 detainees have been arrested for demonstrating to support Berkin Elvan, a 14 year old boy who has been been in coma for 156 days due to a police gas bomb canister. Several injuries were reported during police intervention. 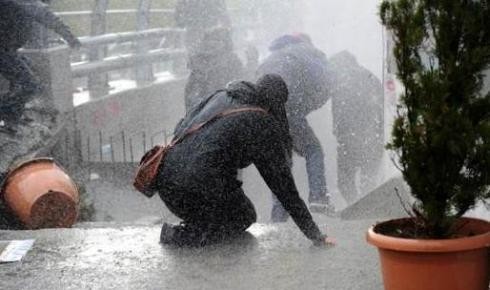 Berkin Elvan (14) is in coma for 156 days. Following an appeal from Taksim Solidarity group, dozens of activists have organized themselves around #BerkiniçinAdalet (Justice for Berkin) hastag on twitter and assembled on the steps of Istanbul Courthouse on Saturday. Police broke up protesters with tear gas bombs and water cannon, leaving scores injured.

“A woman with the same Suna Yıldız had her foot broken,” CHP deputy Mahmut Tanal said in a press statement. The group also said that no investigation has been launched on the violence-involved policemen.

Police chased down protesters as they headed toward Okmeydani direction. 19 were detained.

“I was detained by the police as I was walking by Çağlayan district. I didn’t even attend the demonstration,” Hakan Yılmaz said.

“I found refuge in a barber shop to protect myself from tear gas and water cannons. Police entered the shop and detained me. I didn’t throw any stones at anybody as they claimed,” Doğukan Çınar said.

Advocate Aycan Çiçek, on the other hand, said no credible evidence has been suggested to prove his clients’ charges.

“The only thing they suggested was the police logs,” he said.

Three defendants have been arrested and sent to Metris Prison for “throwing stones at police officer and damaging police vehicles” within Turkey’s Law No 2911 of Public Gatherings and Demonstrations. (AS/BM)