Hundreds of academic across the world have shown their solidarity with Middle East Technical University (METU) in its fight against the unlawful and destructive highway construction project passing through the campus forest. There are 857 signatories from 278 academic institutions and twenty-six different countries. 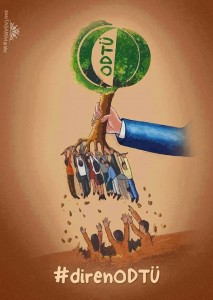 The statement emphasizes that METU resistance has turned into a fight for environmental rights, freedom of speech, and higher education autonomy: “We, the undersigned academics, condemn the unlawful environmental massacre and the police brutality in the Middle East Technical University campus. It is an unethical and unacceptable attack on METU as well as the academia in Turkey. We declare our full support and solidarity with all resisting METU students, academic personnel and staff.” Noam Chomsky, Judith Butler, Immanuel Wallerstein, Etienne Balibar, Asef Bayat, Jean Comaroff, Arturo Escobar, Michael Herzfeld, Anna Tsing, Cihan Tuğal, Erik Swyngedouw, and Vijay Prashad are among the signatories.

Noam Chomsky, widely known linguist and philosopher, has also made an individual statement of support in addition to becoming a signatory of the statement:

I would like to express my support for the protest of the METU Senate against the night-time raid launched by Ankara Metropolitan Municipality as part of the destructive highway project. I would also like to add my voice to those protesting the police violence against students that followed.

The plan to construct the highway passing through the campus forest was first introduced in 1992. It generated huge opposition from the METU students and was suspended. Another version of the plan was reintroduced by Ankara Metropolitan Municipality mayor Melih Gokcek. Recently, due to his insistence on the project, the debates around the highway construction heated up through strong opposition from the METU students and staff, as well as residents of the 100.Yil and Cigdem neighborhoods. While these debates and the legal process of planning were still ongoing, Metropolitan Municipality conducted a night-raid at the METU campus right before a long holiday on 18 October 2013 to make sure the number of students at campus was at its minimum. Metropolitan demolition teams committed an environmental massacre by cutting down three thousand trees overnight. In the following days, police violence against the METU students exacerbated the situation, which included the excessive use of tear gas, water cannons, and rubber bullets.

This unlawful and unethical attack on METU has brought over eight hundred academics together around the same cause. Academics agree on the fact that METU’s fight for its forest is also a fight for its democratic right to protest and to exercise its freedom of speech.

What Is Going on in METU, Ankara?*

Once again, the neighborhood forums and the university come together in the face of environmental destruction and the violation of university autonomy. The efforts to peacefully oppose a road construction project on Middle East Technical University campus turned into a battle for dignity, environmental protection, and the right to protest. The essence of the highway project and the ways in which protests against it were handled are reflections of a certain political agenda pursued by the government. It is another attempt to reconfigure higher education in line with the AKP’s construction of political hegemony in Turkey. Putting these attempts into a context, we explain what the METU forest represents; how the controversy on the highway project started; and how and why it faces such strong resistance from METU faculty, students, and workers.

The Middle East Technical University (METU) was founded in 1956 in an area of 4,500 hectares. The forestation was launched in 1961, when students, academics, and citizens of Ankara, as well as some politicians, participated in the festivals. More than thirty-one million trees were planted, creating a vast green area in the steppes of Ankara. These trees were considered as a heritage of METU workers and academics. The forest encompasses a region of 3,100 hectares and was declared a Natural and Archaeological Conservation Site in 1995 by the Ministry of Culture. According to the website of the METU Forestation and Environment Directory, the forest accommodates one hundred species under the threat of extinction in the Middle Anatolian flora and fauna. This natural ecosystem is home to many wild animals (including wolves, foxes, partridges, rabbits, snakes, and turtles), some 140 bird species, as well as various fish and other marine species living in the lakes and lagoons. The presence of the forest created a micro-climate effect in the region, made the urban climate milder, and put a barrier to unplanned urbanization in the south of Ankara city. The METU Forestation Project won the International Aga Khan Architecture Award (1995) and the TEMA Foundation Award (2003).[1]

Construction of the highway passing through the METU campus was first introduced to the municipal agenda in 1992. This road was supposed to connect Anadolu Boulevard to Konya Road. The project was approved in 1994, and not surprisingly, was responded to by massive student demonstrations. In addition, the METU campus was declared as protected area in 1995.

In 2008, the Metropolitan Municipality, governed by Melih Gökçek (who has been in office for the last nineteen years, and is well known for jumping to and from right-wing parties taking part in the government during this period), introduced a second alternative for the road construction. This project initiated strong debate between the Municipality and METU. The Municipality claimed that the buildings on METU campus were illegal, and decided to demolish forty-five buildings as well as to fine the university a total of 1.8 million TL (approximately 600,000 Euros, or 900,000 USD). The issue was publicly known as “the road showdown.”

The METU administration brought the project to trial. The court decided, as a result of forty-five court hearings, that neither the demolitons nor the fine had any legal grounds and that these were against the public interest. Following the objections of the Metropolitan Municipality, a team consisting of two academics from the Urban Planning Department and five academics from the Civil Engineering Department started working on a new plan. The title of this new plan was “Reconstruction Project for Protection.” According to this plan, the essentials of the first highway route approved in 1994 would be kept as they were, with many additional crossroads proposals. The plan further stated that, in order to avoid environmental damage, the second highway should be constructed as a tunnel.[2]

The Occupation and the Resistance

Students, academics and workers of METU think that this highway serves only political and economic interests. As a matter of fact, if the intention was to relieve city traffic, the municipality should have finished the metro construction that has been ongoing for eleven years already. METU has witnessed protests and forestation actions for years, opposing the destruction. METU students, together with the locals of 100. Yıl and Çiğdem neighborhoods, have organized protests, demonstrations, and recently, have camped in the proposed project site. The municipality responded to the protests with police violence, including tear gas, water cannons, and rubber bullets.

While the METU administration mobilized all legal procedures, the gains achieved by court decisions were overruled in practice due to political interests. On 18 October 2013, the last day of the religious holidays due to the Feast of Sacrifice, when the number of students on campus was at its minimum, demolition workers entered the campus, accompanied by police forces. The next day, METU students, graduates, and workers gathered to protest the night raid, and neighbors from 100.Yıl and Çiğdem joined them in support. Police laid an ambush inside the forest, attacking the protesters with tear gas canisters and rubber bullets. While barricades were formed and police violence continued all night long, it was reported that policemen beat a student and threw him into the fire next to the barricades. The student is diagnosed to have second-degree burns.

After the removal of three thousand trees, the METU Presidency released a statement:

We communicated to the Ministry, Municipality, and State authorities on 11 September 2013, that we were planning to object to their plans, and emphasized that irreversible practices should be avoided in the meanwhile. Ankara Metropolitan Municipality’s (AMM) Director of Techical Works and Director of Construction Affairs stated that no action will be taken without discussing with the university administration. On the same day, a written appeal was sent to AMM to declare that we do not assent to any actions until the legal suspension and objection periods finalize.

Despite of these meetings and correspondences, an abrupt night operation was executed on 18 October 2013, without waiting for the suspension and objection periods to end. Construction machines, construction workers and many municipality employees intruded the university land on 18 October 2013, Friday, at 21:15, without any permission, and by destroying the campus fences on the side of 100.Yıl district Öğretmenler Boulevard. Private security guards of the university tried to warn and stop the teams, as university land cannot be trespassed without permission from the administration. However, it turned impossible to prevent the numerous trucks, construction machines and municipality workers from entering the campus without permission.

In the morning of 19 October 2013, an examination established that the road route inside the METU campus was completely cleaned and all the trees were removed. We are not informed about how three thousand trees (including more than six hundred pine trees that were supposed to be transferred) were removed. Yet, it is impossible to transfer six hundred trees in a single night.

Mayor Melih Gökçek’s agenda is to incite provocation to consolidate his voters before the upcoming local elections in March 2014. In this respect, his objective is very similar to Tayyip Erdoğan’s motivation during the Gezi Park protests, at a local level. Moreover, this is a direct attack to the integrity of METU as a university, as well as the values METU represents in the society. METU students continue their resistance today. Their candid struggle with environmental concerns is exemplified by the amazing tree planting action during which over three thousand trees were planted in the same area.

Subsequently, hundreds of academics around the world have shown their support to METU through a statement: “We, the undersigned academics, condemn the unlawful environmental massacre and the police brutality in the Middle East Technical University campus. It is an unethical and unacceptable attack on METU as well as the academia in Turkey. We declare our full support and solidarity with all resisting METU students, academic personnel and staff.”

As the motto goes: “There is only one road passing through METU, and that is the road to revolution.”

This article is mainly based on an online article written by Out for Beyond:

[2] Information presented in these paragraphs is mainly based on this article [Turkish].