In his time in power, more than a decade now, Turkey’s prime minister, Recep Tayyip Erdogan, has alienated large portions of the population for his seeming intrusions into private lives. He has told women how many children they should have, has sought to outlaw abortion and adultery and to limit alcohol consumption and once, oddly, went on a public tirade against white bread. 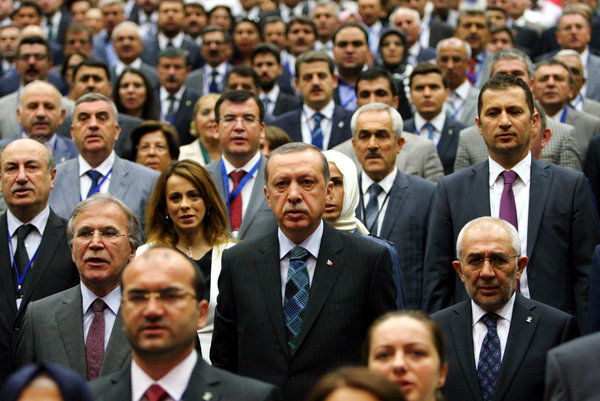 Many Turks who had once supported Mr. Erdogan’s democratic overhauls, like securing civilian control over the military, came to see such pronouncements as grating and abrasive, even evidence of a rising authoritarian style. That contributed to the sweeping antigovernment protests over the summer that presented the gravest crisis to the leadership of Mr. Erdogan and his Islamist-rooted Justice and Development Party, known by its Turkish initials, A.K.P.

Now Mr. Erdogan, who had largely tempered his divisive language in the months after the unrest, has raised a storm of protest, saying this week that he wants to outlaw coed dormitories at state universities, and even extend the crackdown to off-campus housing shared by male and female students. Once again, Mr. Erdogan, with his words, has pushed Turkey’s culture wars to the fore, underscoring deep divisions between the secular and the religious, and prompting the sort of controversy many even within his own party had hoped to avoid in the aftermath of the protests and just before Turkey enters an election cycle.

Invoking his credentials as a conservative, and saying that the government receives “intelligence” about what goes on inside coed housing facilities, Mr. Erdogan was quoted in the Turkish news media as saying to a weekly meeting of his party’s lawmakers: “Anything can happen. Then parents cry out, saying, ‘Where is the state?’ These steps are being taken in order to show that the state is there. As a conservative, democratic government, we need to intervene.”

On Tuesday, political talk shows that normally take on a number of issues devoted much of their broadcasts to the dispute set off by Mr. Erdogan’s comments. Some newspaper columnists seemed to relish the topic and the return, after the withering of the protest movement, of Mr. Erdogan’s words whipping up the cultural currents.

“We are face to face with a prime minister who thinks it is his right to impose his moral sentiment into our homes, and control our personal space with his governors and his police,” wrote Ezgi Basaran, a columnist in the left-leaning Radikal.

In setting off another cultural controversy, Mr. Erdogan risks re-energizing the emotions of his critics that drove the summer’s protests. But, given how divided Turkish society is, he could also galvanize his conservative supporters ahead of elections.

“I live in an all-girl dorm; it’s my choice and I’m happy about it,” said Ezgi Kurtal, a history student at Bosporus University here. “But I do not support Erdogan’s comments. What business does a prime minister have in dictating what sex an adult can live with?”

“We thought he got the message not to interfere with people’s lives at Gezi,” she added, a reference to the park that was at the center of the summer’s protests. “I guess we were wrong.”

The latest controversy comes as Turkey renews long-stalled negotiations to join the European Union. Its foreign policy effort to influence the Middle East also seems in disarray, given its previous support to the ousted Egyptian president, Mohamed Morsi, and its policy of supporting the rebel opposition in Syria as the international community seeks a diplomatic solution.

Mr. Erdogan emerged from the protests seemingly as powerful as ever domestically — his religiously conservative base, which makes up nearly half of the electorate, stuck with him — even as Turkey’s image abroad was tarnished. But the protests also set off debate within the upper reaches of the A.K.P. about the party’s direction and the future of Turkish democracy, just as the country heads into an election cycle that begins next year with a vote for municipal governments that is seen as a test of Mr. Erdogan’s grass-roots support.

Recent interviews with party officials, Western diplomats and outside experts with close ties to the government, all of whom spoke anonymously to discuss internal party deliberations, suggest sharp divides within the party. There is a decided split between those who support Mr. Erdogan unconditionally and those who are more moderate, who line up behind the more conciliatory president, Abdullah Gul, and share some of the concerns voiced by the protesters.

Those concerns have been highlighted by the furor over the prime minister’s comments on coed dormitories and his style. Another A.K.P. constituency, followers of the Islamic preacher Fethullah Gulen, is said to be deeply ambivalent about backing Mr. Erdogan in future elections.

The protests last summer were set off by plans to raze Gezi Park, one of the last green spaces in central Istanbul, for a mall. They grew into a broader rebuke of the government, one consequence of which is that an effort pushed by Mr. Erdogan to broaden the powers of the presidency seems impossible, at least for now.

But Mr. Erdogan is still likely to run for president next year, even without the expanded powers. That would raise the question of who would secure the more powerful post of prime minister. One possibility being discussed within and outside the party is a swap between Mr. Gul and Mr. Erdogan similar to the one that took place in Russia between Vladimir V. Putin and Dmitri A. Medvedev. But Mr. Erdogan hopes to avoid that, according to interviews, as some polls show that Mr. Gul is a more popular figure than Mr. Erdogan among the public.

The municipal elections, especially a much-anticipated mayoral contest in Istanbul, are shaping up as a test for Mr. Erdogan and his long-held ambition to stay in power another decade, until 2023, the 100th anniversary of the modern Turkish republic. A strong showing by the A.K.P. could lay the path for an Erdogan presidency and, eventually, a renewed effort to institute a presidential system, analysts say.

Polarizing the electorate with controversies such as the one about dorms is a well-worn electoral strategy of Mr. Erdogan, experts say. One analyst described the tactic as ripped from the playbook of Karl Rove, an adviser to former President George W. Bush and the Republican Party.

Like many of the controversies Mr. Erdogan generates, this one seemed to be a cultural non sequitur, not linked to any current public debate.

“To be honest, despite the outspokenness on this matter, I really did not understand anything,” wrote Eyup Can, the editor in chief of Radikal. “Where did this come from? If anyone cares to explain, please do.”