Various groups from METU released a statement, saying that Ankara Municipality’s bulldozers committed an “unlawful environmental massacre” by cutting trees on METU campus on the night of October 18. 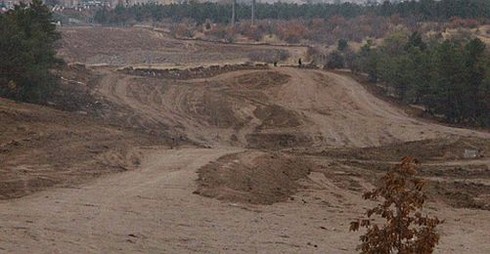 Various groups from METU will plant trees today on METU campus after Ankara Municipality’s bulldozers cut several trees on the night of October 18.

Some of the highlights from the statement were as follows:

“As we all know, Ankara Municipality’s bulldozers and construction staff transgressed into METU campus and decimated around 3,000 trees on a high priority protected zone [SIT zone] with no legal grounds on the night of October 18. On the other hand, police broke up dozens of METU students, alumni, academicians and neighborhood-dwellers with tear gas and rubber bullets.”

“As we all know again, the aforementioned zone is still listed within the protected construction plan under METU even though it was suspended but will effectuate within an approval by Environment and Urbanization Ministry. The night of the raid Ankara Municipality was not only transgressing METU territory but was also conducting an unlawful environmental massacre.”

“Protesting the raid on our campus does not only concern METU family but all Ankara residents as METU forest is a part of our heritage. In order to stand behind our forest and replant trees on the area, we are urging everyone to meet us at Gate A4 at 2 pm.”

“We will also organize a forum at Physics Amphitheater U-2 to discuss the ongoing situation and further steps.” (BK/BM)