Middle East Technical University (METU) students and some Gezi Park forums in Ankara have launched a protest in order to prevent a planned road construction through METU campus and forest. 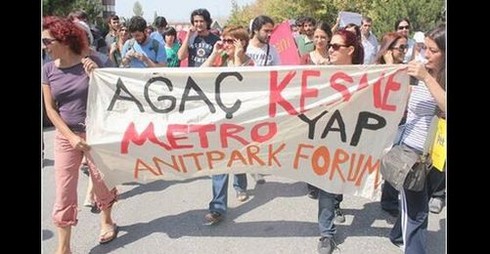 Middle East Technical University (METU) students have set up tents and launched a protest against the planned road construction between Anadolu Boulevard  and Konya province, as construction workers have advanced towards METU campus and forest.

Activists claim that the aforementioned road will go through the periphery of METU forest.

Around 2 pm local time on Sunday, METU students joined forced with the Gezi Parker forum from Çiğdem Mahallesi – the neighborhood through which the road will continue. The gathering was also attended by Çayyolu and Anıtpark forum groups.

Demonstrators have set up their tents adjacent to METU main gate A4. Around 7 pm local time the same day, a team of riot police arrived to the scene along with a TOMA.

Activist released a statement, saying that they will not allow the construction to go through METU campus. “We will resist,” students said.

Later on, police warned activists, saying that “they would intervene unless tents are removed”. Students responded the call positively, deciding to resume their protest without tents.

“Sky is all we need,” some students cheered. While police withdrew, activist called for solidarity through social media on behalf of ODTU Resistance.

On August 19, dozens of people from METU Alumni Association, METU students and 100. Yıl Forum have protested on the steps of Turkey’s Preservation Council of Natural Heritage Council in Ankara.

Demonstrators have tied up red ribbons on the trees in METU forest which they claimed soon to be cut due to the road construction. The same day, protestors have called for a second protest on August 25 with a slogan “Bring your tent, protect your forest/neighborhood”.

“According to Constitution Article 56, the protection of environment is the duty of government and people. We are executing our constitutional duty,” activists said in a statement.

Since 2008, Ankara Metropolitan Municipality have reportedly had efforts to construct a road through METU forest.

In 2008, the municipality ordered the demolishment of 45 university building, saying that they were “constructed without permission”. It also issued a 1.8 million lira (roughly 800.000 euros) fine.

METU President’s Office have taken legal action against the ruling in 45 different cases, finally proving that the demolishment orders have no judicial grounds.

On 25 May 2013, METU President Prof. Dr. Ahmet Acar released a statement, saying that the planned road construction consisted of two divisions – one of which was cancelled by court and other was left by METU.

The statement went on to say that the municipality made a new construction plan where natural and archeological sites could be protected providing that the road will continue through tunnels.

“The construction could be accepted within that plan,” the statement said. (HK/BM)